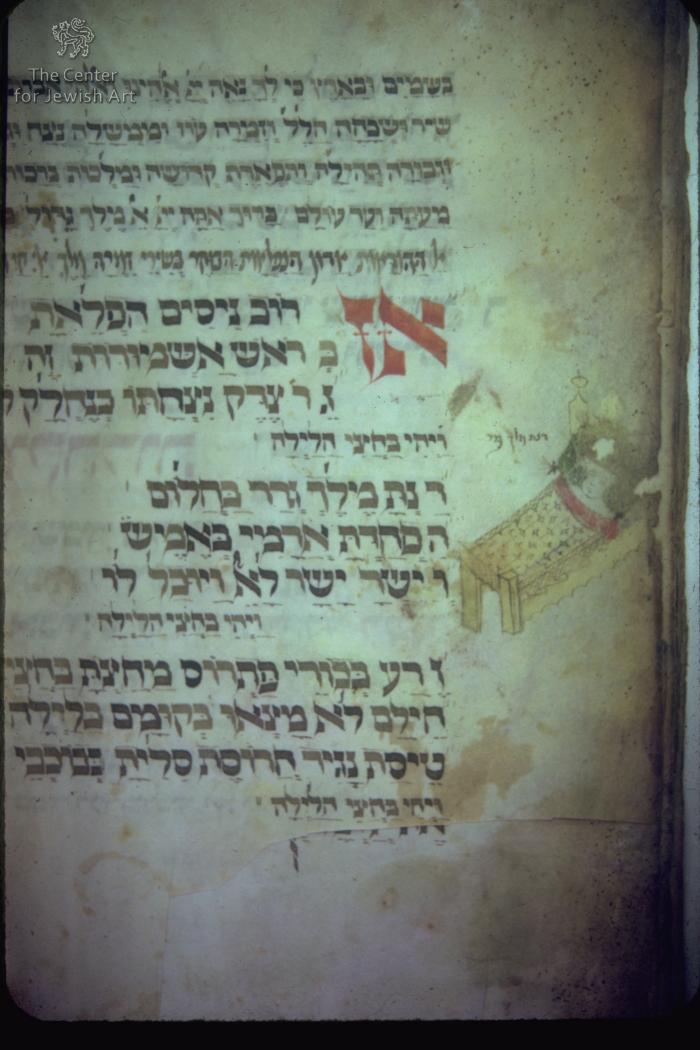 The First New York Joel ben Simeon Haggadah is one of the earliest manuscripts copied and illuminated by this prolific scribe-artist. Of about 20 manuscripts attributed to him or his itinerant workshop, from Germany and northern Italy, eleven are signed and six are dated (see Narkiss, Hebrew Illuminated Manuscripts, 1969, pp. 171-172; Narkiss, Washington Haggadah, pp. 29-42).

Our manuscript is signed, though not dated. By comparison with his more mature script and style of illumination, it is obvious that this Haggadah is the work of the young Joel, probably done in Germany before he went to Italy in the early 1450s. (The earliest dated manuscript from Italy is a Mahzor from Cremona dated 1452, in Turin, Royal Library, which was partly destroyed by fire in 1904). Joel may have been born in Cologne in the early 1420s, and expelled from there in 1426 with his family, when they settled in Bonn. In two of his colophons, Joel states that he is from Cologne while in two other colophons he is from Bonn. He may have started his apprenticeship as a scribe in Bonnor in another near by town. He must have been trained by a professional scribe, with whom he may have travelled from the age of fourteen or fifteen in the middle Rhine and Franconia. In the early 1440s, when he was seventeen or eighteen, he must have become an independent scribe, able to sign his name to a colophon, as he did in our Haggadah.

Our Haggadah and the First Nuremberg Haggadah (Jerusalem, Schocken Library, Ms. 24086, formerly Nr. 2107b, in the Nuremberg Germanisches Nationalmuseum), are remnants of his earliest works in copying and illuminating manuscripts. Both manuscripts reveal the unsophisticated hand of a young scribe-artist. The script and the decoration are those of an unsure hand, though both script and draughtsmanship contain stylistic elements for which Joel would later be distinguished. Examples are the decorative extensions of his ascenders (i.e. lamed) and descenders (qof and the final kaf, nun, pe, >zade), the flourishes round the letters of his display script, the tapestry-like initial word panels, the style of a draughtsman in his illumination, even when it is painted, and the large, round faces with pronounced, rounded eyebrows. His training as an artist in this early stage must have been in the Rhine area, Franconia, and southern Germany. Closely related stylistically are the Coburg Pentateuch of 1396 London, British Library, Add. 19776, see Narkiss, Hebrew Illuminated Manuscripts, 1969, pl. 37, p. 114), the Hamburg Miscellany from Mainz of 1427 (Hamburg, Staats- und Universitatsbibliothek, Cod. Heb. 37, see Narkiss, Hebrew Illuminated Manuscripts, 1969, pl. 39, p. 118), and the related Second Nuremberg Haggadah (Jerusalem, Schocken Library, Ms. 24087) and the Yahuda Haggadah (Jerusalem, Israel Museum, Ms. 180/50, see Narkiss, Hebrew Illuminated Manuscripts, 1969, pls. 40, 41, pp. 120, 122), and the Hileq and Bileq Haggadah (Paris, Bibliotheque Nationale, Hebr. 1333, see Narkiss  nd Sed-Rajna, Index of Jewish Art, 1981, Vol. II, 1), the last three are from southern Germanyin the first quarter of the 15th century. Joel's more mature style developed after he came toItaly, and is represented in this volume of the Index by the Second New York Joel ben Simeon Haggadah (ms.8279). A strange liturgical element is the inclusion, at the end of the manuscript, of a piyyut of Spanish or Provencal origin פסח מצרים (Davidson, III, פ No. 144, p. 303), which was noted by Alexander Marx (1944, p. 268, based on D. Kaufmann, "Une Haggada dela Franceseptentrionale ayant appartenu a Jacob ben Salomon Avignon" Revue des Etudes Juives, XXV, 1892, pp. 65-77). According to D. Kaufmann, the Wolf Haggadah was of northern French origin, from the end of the 14th century. It belonged to Rabbi Jacob ben Salomon of Avignon, who lost three of his children in the plague of 1373. The scribe and liturgy including this piyyut are taken to be of Provencal origin by Mordechai Glatzer (1991, pp. 139-169), since the author of the elaborate customs was from the area and a pupil of Rabbi Nathan Hayarhi (of Lunel 1155-1215). In any case, there is no obvious origin for the piyyut in the Ashkenazi rite of this Haggadah by Joel ben Simeon.

The iconographical programme of the First New York Joel ben Simeon Haggadah relates to the common Ashkenazi Haggadot of the early 15th century, such as the Second Nuremberg, the Yahuda and the Hileq and Bileq Haggadot mentioned above. They all have coloured pen-drawn illustrations in the margins, relating either to ritual, historical, or eschatological subjects. Most of them are directly connected to the text they illustrate, at times a single word or verse in the Haggadah. Joel ben Simeon mostly used traditional iconography for his illustrations, though he was fairly eclectic in choice, which is understandable in the case of a young scribe-illuminator. This is in fact Joel's earliest extant Haggadah with a fully developed programme of text illustrations. The earlier First Nuremberg Haggadah has only one text illustration, of a Seder table. Since Joel's iconography in this Haggadah is so traditional, it is at times possible to conjecture the subject and the iconography of some of the many excised pictures. At other times the missing subjects and their iconography could be deduced by comparing them with Joel's later Haggadot (see Narkiss, 1991, pp. 54-87), though a proper detailed study of Joel's entire iconography is still lacking. 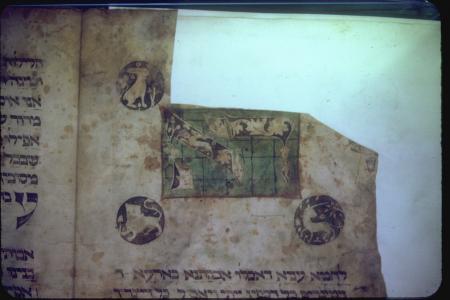 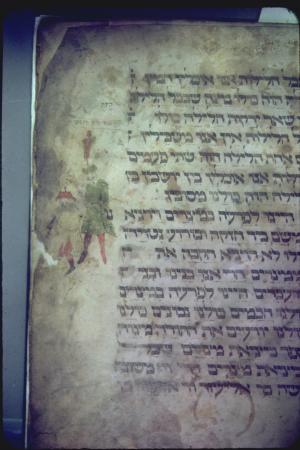 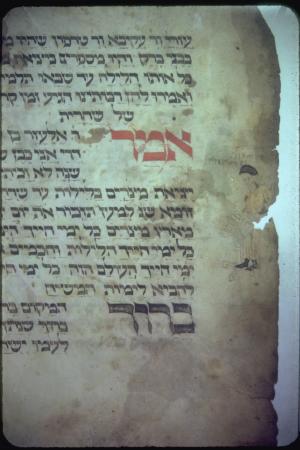 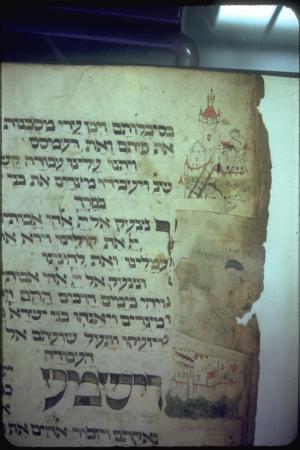 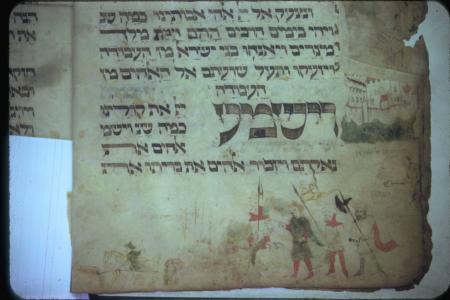 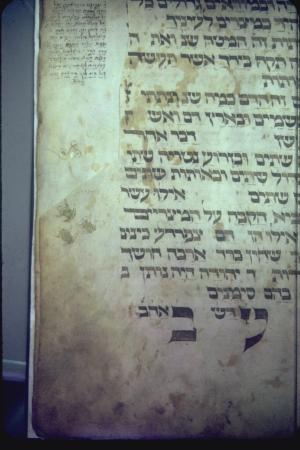 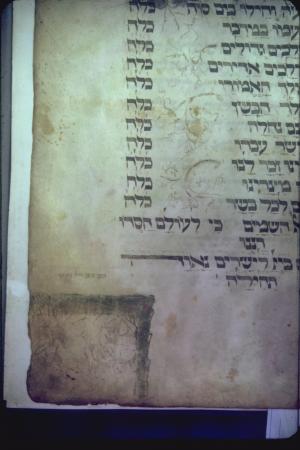 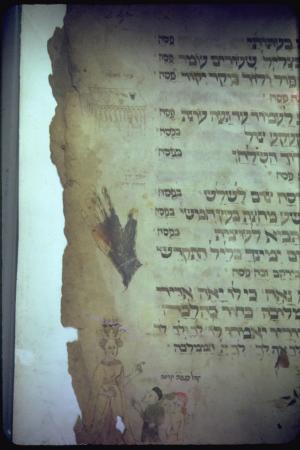 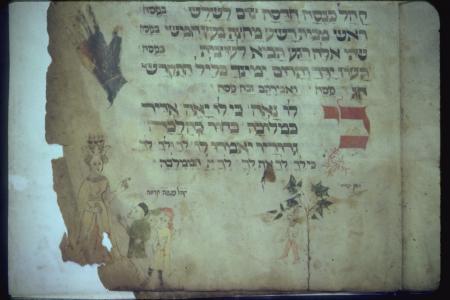 Parchment, I + 23 + I leaves, (333-335) x (250-255) mm; text space (216-220) x (155-158) mm. Written in square Ashkenazi script, instructions in round Gothic script in light brown ink; 17 lines per page. Ruling not noticeable. Pricking is noticeable in all four margins. 4 quires: I6 II10 III6, IV1. Some text is missing at the beginning of the manuscript. The margins of of the manuscript were badly damaged at a later date by crude knife cropping of the illustrations, but the text of the  Haggadah remains intact.

A. 18 marginal text illustrations, each with an accompanying caption, sometimes within a banderole. Tinted pen drawings on the parchment ground using green, red, white and yellow (see below).

E. Penwork flourishes (fol. 18, see below). two of which are within a panel.