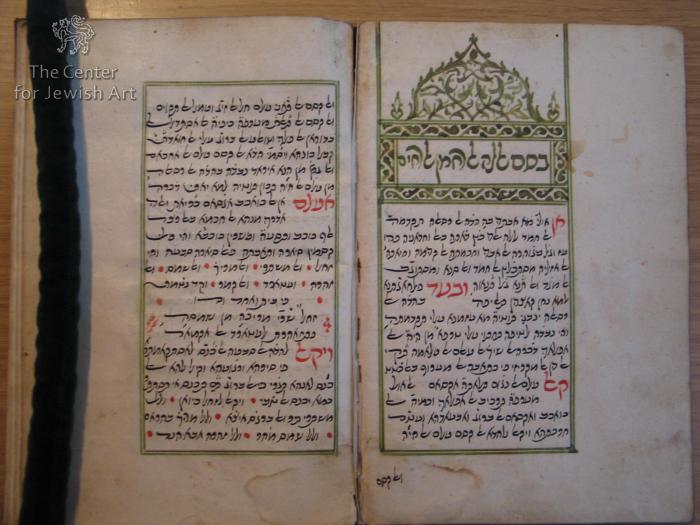 Hebrew and Arabic in Hebrew characters of semi-cursive oriental script in black ink in one text column.

No pricking noticeable except for one hole in the top margin (which does not correspond to any of the rulings), which held the bifolia gatherings of the quires in place probably on board for writing purposes before sewing them together.

Catchwords for the page, written horizontally on the lower left-hand corner below the frame of every verso.

Fols. 1-3r (contain later frames with Arabic writing inside) and 34v-36v are blank.

The Arabic text of the Vienna Epistle is written in Hebrew Oriental semi-cursive characters (Judeo-Arabic script). The manuscript was copied on paper in the 17th-18th century by a single scribe. The manuscript is simply decorated with a panel of the Basmalla framed by a spared-ground acanthus scroll on green ground. The Basmalla formula appears at the opening of written text, holy or secular, in particular in the Holy Quran, in each of the114 chapters (suras).

Above our Basmalla panel is a foliate ansae shaped as an interlaced rounded gable. This type of decoration, which originated in the Roman tabula-ansae (i.e. the square panel with triangular "ear" on one or both sides framing dedication inscriptions, see Herzfeld, islamichen Epigraphik), is known from many Muslim manuscripts, and again mostly from the Qur'ans as a marginal foliate palmette-ansae decorating the sura headings, or as the palemtte-ansae attached to the outer side of decorated full-page panels placed in pairs of two facing frontispieces and finispieces in the Qur'an. In some cases the palmette-ansae also surmounts the panel as, for example, in the Qur'an copied in Maghribi script in 1729-1730 inMorocco for a prince of the family of the Sharifi Sultans (Cairo, National Library, 25). In the two facing carpet-pages (fols. 261v-262) of this magnificent Qur'an the central panel is decorated above on each side by a shaped ansea of interlaced motifs similar to the gabled-ansea decorating the panel in our manuscript. Despite the fact that our manuscript is a more simple design and is executed only in green pen-work, the similarity in the design of the decoration between the two manuscripts is clear.

Another undecorated Arabic manuscript Hebrew characters housed in the Vienna collection is Cod. Hebr. 212, which is written in a similar script to our Vienna Astronomical Epistle although further research needs to determine if these were indeed copied by the same scribe. Both manuscripts were described in Steinschneider's Catalogue numbers 54 and 55.