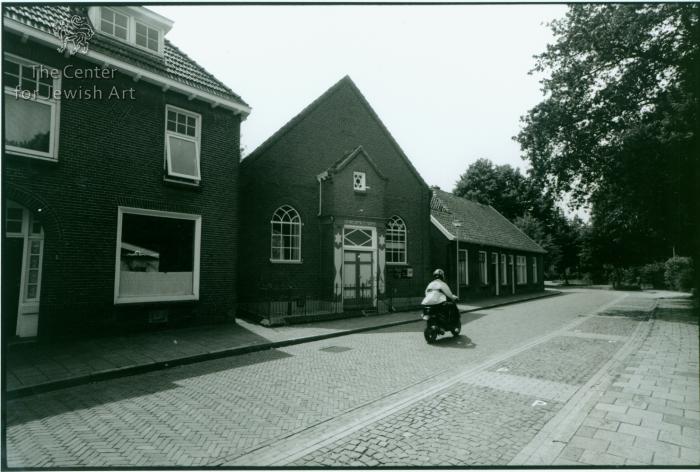 The square-shaped synagogue in Aalten was built in 1857 and replaced a house shul which was located on this site which dated back to 1784. The most important characteristics of the synagogue are the lancet windows with its cast iron panes. Before entering the synagogue, two Ionic pillars at the entrance can be seen, including the cornice at the top with a Hebrew inscription (Psalm 118:20).

In 1927, J. B. Bikkink changed the roof and entrance into its current form. During the Second World War, the building was entirely looted. In 1949/50 the architect A. Ozowicz rebuilt the synagogue, changed the layout of the interior and designed the new bimah and Torah ark. During a renovation in in 1985/86, the architect M.J. Hebly removed the ceiling which was installed in 1950 and reopened the side entrance which provided access to the women’s gallery at the western part of the building.

Several elements of the previous synagogue were discovered including two floor mosaics depicting the Star of David. The old mikveh was also found which used to be located in a separate room but has since been covered up. The synagogue has seldom been used after its rededication in 1986.