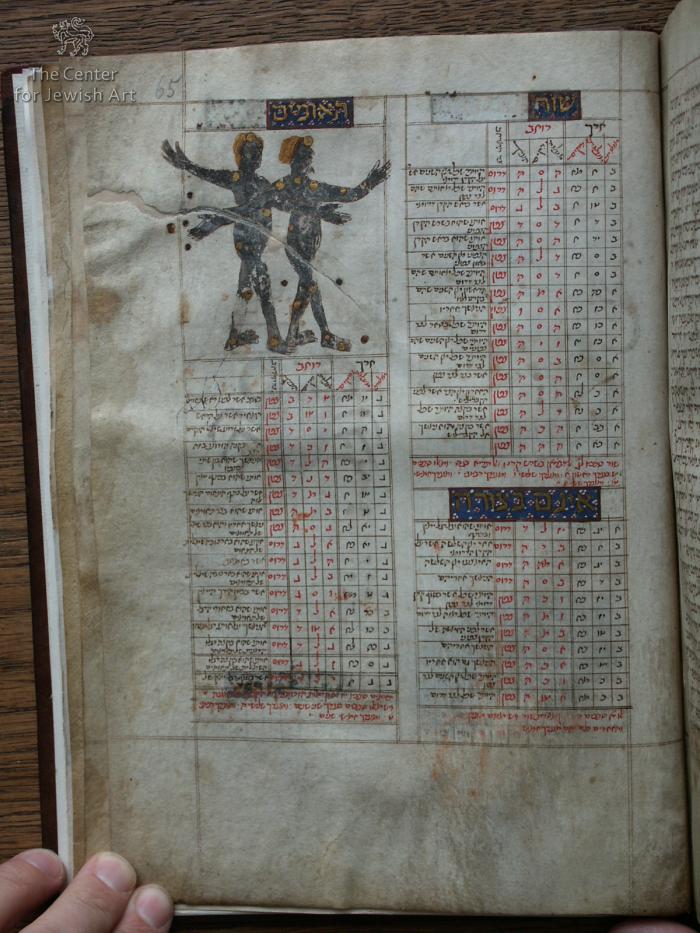 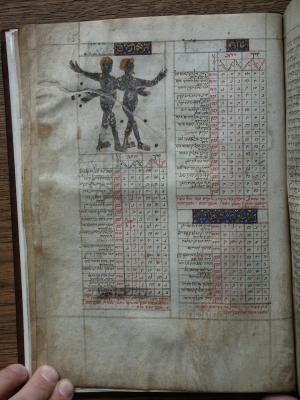 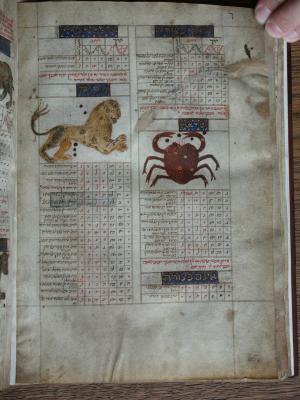 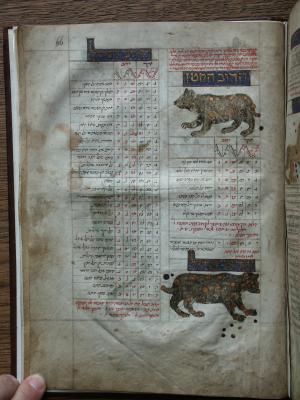 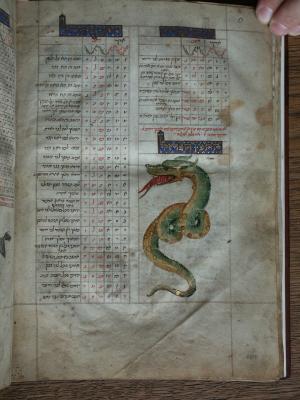 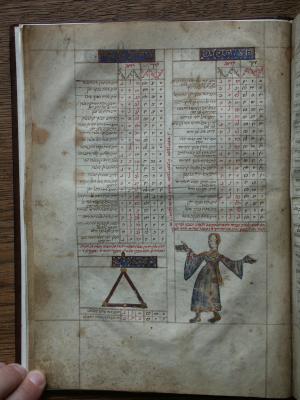 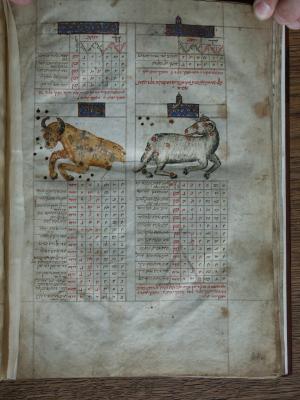 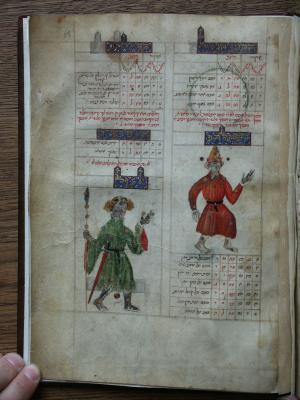 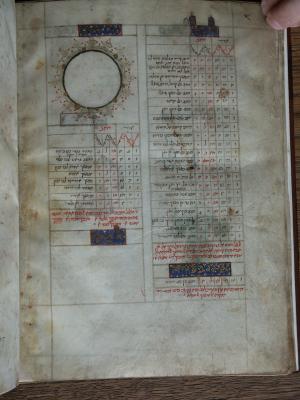 It is easy to distinguish between hair and flesh sides of the parchment.

The main text is written in two columns.

The tables are ruled by ink on each side of the page in various numbers of vertical and horizontal lines.

The two or three vertical and horizontal boundary lines for the text space are drawn along the entire width and height of the page.

Small sticker inscribed: "Cod. Hebr.132”is glued at the upper corner of the inner side of the front cover.

At the center of the inner back cover is a glued paper with the name: “Herrn Dr. Wolfgang Georg Fischer” of the ÖNB's department of restoration.

The main decoration of the manuscript focuses on the star catalogue. Each constellation in the catalogue is furnished with a decorated heading followed by an illustration and associate table.

Empty spaces were left in the text columns for other decorated initials which have never been written (fols.

The six treatises by Abraham ibn Ezra (d. 1164) is part of the corpus of astronomical and astrological treatises - a kind of an Astrological Encyclopedia that Ibn Ezra wrote for teaching purposes mostly in 1148 inBeziers ((בדרש in southern France. Of these treatises the two earliest and most important, which designed to impart the basic rules of astrology are Sefer Mishpate ha-Mazalot, a treatise on the spheres and the zodiac, refers mainly to Ptolemy and discussed Indian astronomy, and Sefer Re'shit Hokhmah, a second and improved version of Sefer Mishpate ha-Mazalot that explains basic rules and principles of various fields of astrology.

The other three treatises are featuring the basics of various branches of astrology. These areSefer ha-Te'amim, (second version), written around 1149 in France, which includes explanations to Re'shit Hokhmha and Sefer ha-Mivharim, (second version, which time and place of writing unknown) including discussion of determination and free will, and Sefer ha-Sheelot, about the influence of the stars on every day life and properties. The last book is, Sefer ha-'Olam the large astrology of the world (Sela, Ibn Ezra, pp. 21; 361-378).

The Tables of Jacob Po'el, ("לוחות הפועל") was written by the Catalan-Jewish astronomer of the King Pedro IV of Aragon ("the Ceremonious", king 1336-1387). His set of tables and discussions on astronomy and solar and lunar eclipses was prepared for the 31 years following 1361 for the latitude of Perpignan, where he lived (see: Sassoon, Ohel David, p. 1041; Glick, Convivencia, pp. 91, 198). This may imply that our manuscript was copied not before 1361.

Most of the remaining tables are after the works of Don Pedro (see Millas, Tablas Astronómicas), of Abraham bar Hiyya, called "Savasorda", the astronomer contemporary to Ibn Ezra who lived and worked in Barcelona in the first half of the twelfth century (Glick,Convivencia, p. 86) and other tables.

The last and the most important treatise in our manuscript is the Star Catalogue for the year 1391. This is a rare example in the medieval Hebrew literature and in fact we know of only one manuscript known as "Sassoon 823", (now in the private library of Lawrence J. Schoenberg, in the U.S.A, Ms. 57) which includes identical texts and star catalogue in an almost complete version (see: Sassoon, Ohel David, II, No. 823; Sotheby's catalogue, New York, 1984, lot 88). Both Star Catalogues are richly illustrated, and this feature makes them unique in the Hebrew manuscript tradition (Langermann et al., Sassoon 823, p. 260). In contrast to the Viennese manuscript which has only thirteen out of forty eight constellations, that of Sassoon's (pp. 116-144) has forty six constellations and in addition contains a rough sketch of the back of an astrolabe and two full-page miniature of the sky constellation. However, we recently become aware of another manuscript (Moscow, Russian State Library, Ms. Ginsburg 840, now in Braginsky Collection, No. 93, see: A Journey through Jewish Worlds, pp, 40-41) which holds 18 leaves closely related to our manuscript.  It is very probable that these leaves are part of the missing leaves in our Vienna manuscript. Two of the pages of this manuscript include three constellations of the Orion?, Lepus and Eridanus, that have there parallels in Sassoon manuscript (respectively, pp. 133, 134).

Sassoon work can be dated to around 1391 also on the basis of its first astronomical table of the fixed star catalogue (p. 117). Presumably it was a copy after the Viennese manuscript. The texts of which are also written in the same semi-cursive Sephardic script, and has identical measurements, same layout of the text and same number of lines. When there are differences, the Sassoon codex inserts nonsense-rows – this may point to the direction of dependence, since in ourVienna manuscript the text is much more fluent. Nevertheless, it is possible that both manuscripts shared a common unknown model.

The Sassoon manuscript was restored relatively early in the Arab region, for example, the outlines of the constellations were re-drawn, as that of Cepherus on page 119. Also the Arabic inscriptions on the Sassoon's leaves (e.g. p. 10) may. point to this possibility. But the pictures are preserved close to the origin in its entire composition and the well preserved gold framing and headings (e.g. pp. 130 and 131). The colours are exactly the same in both codices. Even the ornaments in brown ink can be found in the Sassoon codex although those of the Viennese manuscript are of a higher quality. The fleuronnée of the Viennese manuscript is of a higher quality, too.

These provide enough clues to allow us to localize the work in the same workshop as the Vienna Codex. However, whereas the Viennese codex was executed by the same scribe and artist, several scribes can be identified in the Sassoon codex, the main scribe being similar to that of the Viennese manuscript. He identifies himself on p. 2 as Moses by emphasis the letters of his name (see Schwarz 1925, pp. 208-11).

The stylistic similarities of both Viennaand Sassoon manuscripts mainly concern the zodiac animals, where even details are matching, especially that of the Snake, Capricorn, Taurus, Lion and of the Cancer. Cephues also is almost completely identical with the same red garment, the Phrygian hat and his posture, the same is true for the Twins. The more orientalised features of Bootes and other human figures in the Sassoon 823 point to the later restoration.

Other similarities of both manuscripts can be found in the design of the human figures. Especially, the fashionable details of the figures dressed contemporarily, as that of Andromeda on fol. 67 and that of Bootes on fol. 68 point to the time around 1400. The closely fitting, high laced and low necked dress with the characteristic closed fitting but at the end wide sleeves can be found nearly identically – but reaching the ground in contrast to the Viennese manuscript – in the Valerius Maximus manuscript, written in 1395 and localized in Barcelona in the oeuvre of Rafael Destorrents (Ms. L/36 of Historical Archives of the City of Barcelona (fol. 198v, in Planas, gótico catlán, fig. 29), and also on fol. 47v in manuscript Ms. 760 of the University Library of Barcelona (see Boto Varela & Molina Figueras, Satire et comique dans l`illustration marginale, fig. 1) dated between 1415 and 1430; codices, which can be compared stylistically and support the localization to Catalonia. The dress of Bootes also points to the period around 1400, so is the decorated diadem on his head, with pearls and projected center – the star – which is very often found in the ornament on angels' head in the 1400 painting.

The fleuronnée motif, which surrounds the initial words on our fol. 21 consisting mainly of folded leaves whose inner "teeth" are rows of buds, can be found also in other Spanish manuscripts, especially those made in Catalonia in this period. One might compare for example Ms. Or. 5600 of the British Library in London, especially fol. 124v (in Narkiss, British Isles, fig. 392), a codex, which was carried out in Spain in the beginning of the fifteenth century. Here one can also find the spiral "enrollings“. Similar is also the fleuronnée of the Maimonides Manuscript, Ms. Add. 1493 of Cambridge University Library, written in 1396 in Catalonia (Narkiss, British Isles, fig. 375, there the captions are swapped).

The set of illustrations of the human and animal mythological figures associated with the constellations in Viennaand Sassoon codices goes back to al-Ṣūfī and dates from about the year 1000. It is a pictorial representation of the Ptolemaic star catalogue dates from 138 C.E. While Ptolemy himself did not provide the catalogue with any drawings of the constellations, al-Ṣūfī's Arabic book on the constellations and later in his Latin corpus, were accompanied by drawings (Wellwsz, al-Ṣūfī Manuscript, pp. 1-26). The same illustrations which belong to the manuscripts of al-Ṣūfī are utilized on all medieval Arabic star globes (see Langermann et al., Sassoon 823). The sequencing of the constellations' illustrations is very close to the order of al-Ṣūfī as it appears in the, either his Arabic astronomical manuscripts or in the Latin al-Sufi tradition (Vienna Cod. Mixt 331 (Baghdad1400; compare Duda, Isalmische Handschriften, 10 and 159 ff.) and CVP 5318 (Saltsburg, 1474). Altogether, it seems that the author of the Hebrew manuscripts has assembled astronomical material from a variety of sources.

The stylistic result confirms the assumption that the manuscripts generated inCatalonia, to which point already the mentioning of “Barcelona” in the headings on fols. 29 and 57v as well as “Majorca” (as insertion by the hand of the scribe on fol. 57v in the tables of Don Pedro). Thus the manuscript was made around1391 ina Catalonian workshop, which was responsible for at least one other Hebrew astronomic manuscript.

The 17th century Greek inscriptions on the flyleaves refer to the later retention of the manuscript in the Greek-speaking area. There are also some notes in Latin script. In mid 19th century the manuscript was given as a gift to the Imperial Library of Vienna by Anton von Mihanovich ofConstantinople.