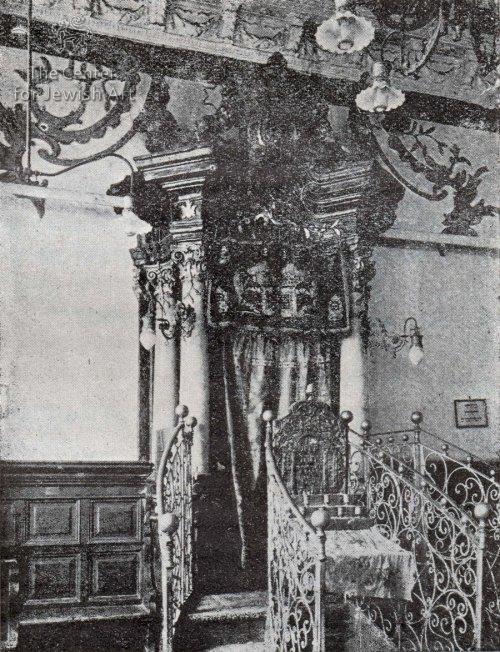 The burial society Ḥevra Kadisha in Vilnius was probably established in the late 16th century; though, its first explicit mention dates from 1655 and its “prayer room” noted in 1670. A separate synagogue with a women’s section of the Ḥevra Kadisha existed already in 1707; half of its income belonged to the Tsdakah Gdolah (Great Charity) Society. The community transferred the synagogue to the exclusive possession of the Ḥevra Kadisha only in 1747; however, in the same year the Ḥevra Kadisha bought from the community a plot in the shulhoyf and erected there its synagogue in 1748. The synagogue was damaged by fires in 1748 and 1749. Yesod paid for the construction of a new ceiling and received for this two burial places, for himself and his wife, in the cemetery. In 1751, being in urgent need for funds, the Ḥevra Kadisha let its synagogue for ten years. The women’s section in the Ḥevra Kadisha synagogue was built in 1768 and one third of the income from the sale of seats there went to the Tsdakah Gdolah. The entrance to the synagogue was situated on the northwestern façade, facing the Old Kloyz, while the women’s section was entered through an outer staircase on the southwest façade. The Torah ark in the synagogue was an elegant masonry baroque construction, where two Corinthian columns flanked the Torah niche and bore a broken tripartite pediment. The wall above the ark was decorated with painted stucco rocaille. The photographs show that the windows of the women’s section were round-headed, while the windows of the prayer hall were rectangular.

In the mid-19th century the Ḥevra Kadisha spent two rubles a week for the synagogue maintenance.69 It is noteworthy that official documents from the early 20th century record its name as “Bratskaia” (Brotherhood). In 1915 electricity was installed for the 90 regular worshippers and 14 Talmudic scholars who received support from the congregation. The synagogue possessed two small rooms on the ground floor of the building, which were let. In the 1930s the Jewish artist Zinnmann, who painted the Old Kloyz, also decorated the Ḥevra Kadisha synagogue, which had 64 worshippers in 1933. With the establishment of the “small” ghetto on September 6, 1941, a Communist-lead Yiddish school was situated in the synagogue. Its Torah ark was still preserved in 1944.