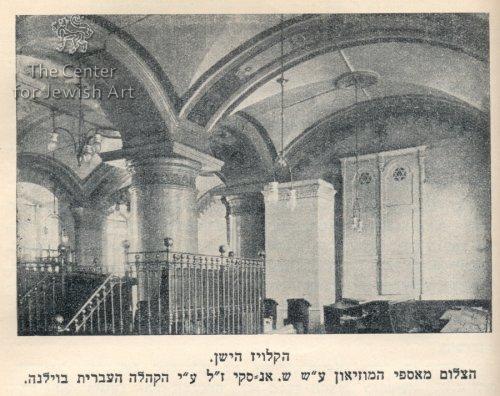 Tradition has it that the kloyz was established in 1440, but this seems exaggerated. It was probably built in the late 17th or early 18th century. The Old Kloyz was heavily damaged by the fires of 1737, 1747 and 1748. According to the historian of Jewish Vilnius Israel Klausner (1905–77), “the Torah ark is beautiful in its simplicity, a simple and beautiful geometric ornament [decorates] its copper doors.”

The groined vaults of the prayer hall were supported by two Tuscan columns standing on the transverse axis; the bimah was placed between them. The entrance to the kloyz was situated in the annex at the corner of the Great Synagogue and the kloyz. In 1916 there were 27 regular worshippers in the kloyz, and five Talmudic scholars received a monthly stipend for learning there. The kloyz owned two rooms on the ground floor of the building and seven small rooms on the upper floor, and had gas lighting. The small number of worshippers in the kloyz in the 1920s and 1930s is the subject of Chaim Grade’s story "Zeydes un eyniklekh" (Grandparents and grandchildren).

The inscription from the 1930s above the entrance door read: בית המדרש ישן / נתיסד בשנת ר (The old beit midrash, established in 1440). The arched passages under the kloyz, leading to the second courtyard of the shulhoyf were opened at the beginning of the 19th century, and the building was rebuilt in 1838 and renovated in 1891. During the renovation of the 1930s, the prayer hall was painted by the Jewish artist Zinnmann. There was also a women’s section in the kloyz.

The shtibl of the Lubavich Hasidim was situated from the 1810s in the upper floor of the building; but from 1908 it was used by the Tiferet Baḥurim Kloyz.