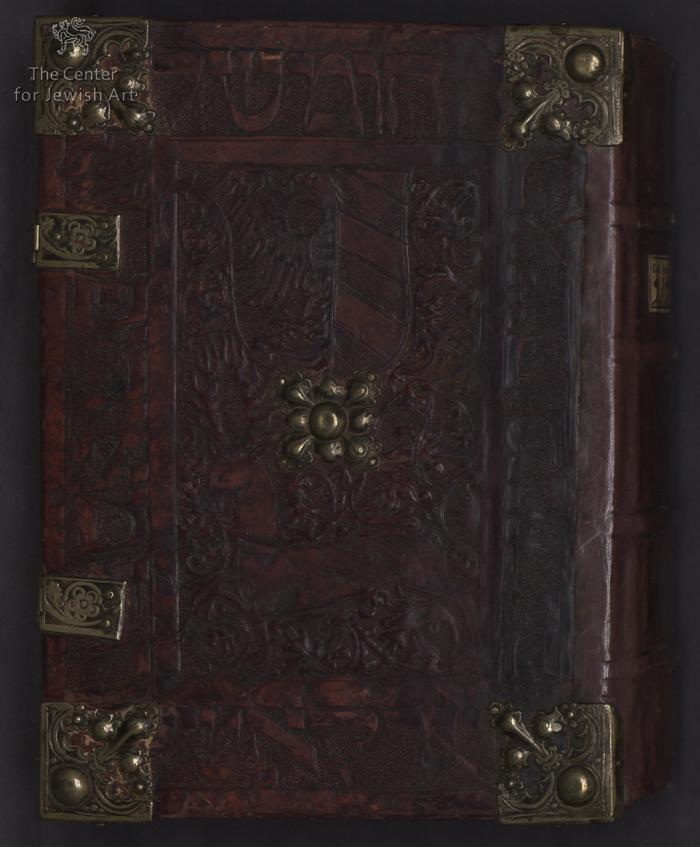 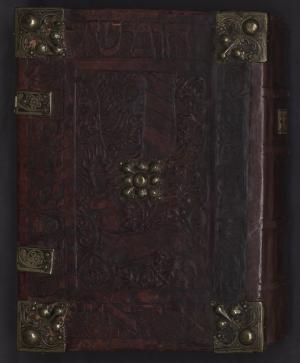 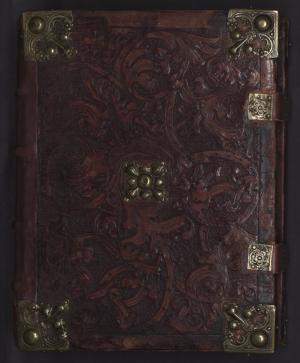 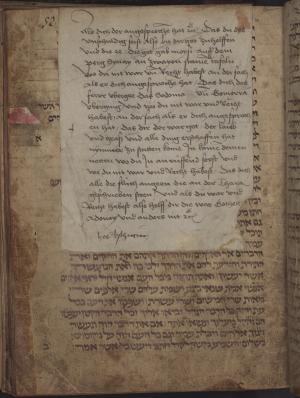 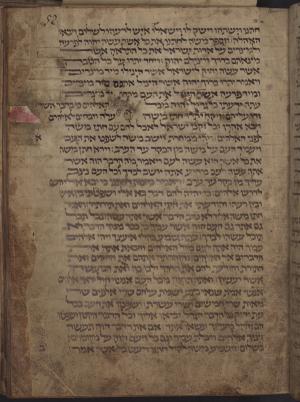 For the decoration of the binding, see Illuminated Document.

This Ashkenazi Pentateuch was copied probably in the mid-13th century or before, as can be deduced from its codicological features: the distinguishable sides of the leaves resemble parchment in Germany until the mid-13th century (Beit-Arié 1981:22-25); the arrangement of the quires does not follow Gregory's rule, perhaps because it was not yet established in Ashkenazi Hebrew manuscripts; and the methods of ruling by stylus and pricking all margins except the inner one in our manuscript supports this early dating. The text was written by three unknown scribes who used defective parchment with torn edges and holes. However, the Pentateuch was intended to serve as an exemplar (tikkun) for copying Torah scrolls. The Hebrew letters are furnished with tagin (crowns, or tittles), for example, the letter bet of בראשית (Gen. 1:1, fol. 1v) is decorated on top with four tagin; certain letters (usually pei and tet) are spiral ((לפופות, curved (עקומות,

e.g. fol. 5, the roof of final nun of ידון), or rounded (e.g. fol. 133, the heads of the letter ayin of ועצמתיהם). These and similar special letters are based on the rules of the Book of Tagin (Sefer Tagi), an ancient work on the letters of the Torah. One of the earliest copies of this book is included in the Vitry Mahzor, copied in 1208 by R. Simhah b. Samuel of Vitry (thanks are due to Mr. Ephraim Caspi and Mr. Mordechai Dov Weintraub for sharing their findings on this topic). Indeed, our manuscript is one of the earliest codices known today which include these tagin and special letters. The earliest known manuscript is the Valmadona Pentateuch, produced perhaps inEngland in 1189 (London, Valmadona Trust Library,

MS Valmadona 1), which has similar codicological features to ours (Beit Arié 1985). Moreover, besides the tagin, the layout of the text in our manuscript, where every two facing pages start with the letter vav, proves that it served as an exemplar (tikkun) for special Torah scrolls (Vavei ha-Amudim): the text of facing pages constitutes one column in such Torah scrolls which starts with the letter vav; except for six facing pages (fols. 1v, 37v, 49v, 136v, 141v, 148v), which follow another massoretic rule, namely:

About two hundred years later, at the end of the 1460s or the 1470s, our Pentateuch received its present binding inNuremberg(fig. 1). It was produced by the prolific Jewish scribe, illuminator and binder Meir Yaffe for the Council of Nuremberg (cf. CJA Documentation of Ulm Mahzor,MunichBSB Cod.hebr. 3).

Our binding was first published by Husung (Husung 1925:38-39). A short time later Goldschmidt identified Meir Yaffe with a Jew, Meyerlin von Ulm, mentioned in a decree of the Nuremberg Council issued on July 4th 1468, where Meyerlin was permitted to stay in the city and bind the library’s books for the Council (Goldschmidt 1928:80). As Landsberger suggested, the binding was probably a payment for the permission to stay in the city (Landsberger 1940:544). This is supported by Glatzer’s research on the London Ashkenazi Haggadah, where he shows that in 1459 or 1460 Meir Yaffe worked inUlm on this Haggadah as a scribe (Glatzer, facsimile 1991:140, 144). According to Narkiss, Meir Yaffe also drew the marginal decorations of the London Ashkenazi Haggadah (Narkiss, facsimile 1991:35, note 33). However, Zirlin claims that Yaffe only inserted the text into the pencil drawings by a skilled hand of Bämler’s atelier (Zirlin 2006:293). In any case, the scrolls on the back cover of our binding resemble to some degree those in the panel on fol. 19 of the London Ashkenazi Haggadah (fig. 2).

a procedure in which the craftsman cuts ornaments and figures into the moist leather and then, by various methods, raises them in relief. This is an old established craft which reached its peak in the 14thand 15th centuries (EJ, 'Books') and was probably introduced to central Europe fromSpainandPortugalthrough Jewish binders (Katzenstein 1982:17, 20). In 1927 Herbst discovered 11 bindings, some of which bear a scroll with the stamped name "Mair bb" and a deer. He concluded that these are from the same bindery of Meir Yaffe (Katzenstein 1982:21-22; Geldner 1953:31f, 36-37, pl. 6). Goldschmidt has enlarged the group by 11 additional volumes, making a total of22. Incontrast, Landsberger claimed on stylistic ground that these 11 or 22 bindings are not the work of Meir Yaffe (Landsberger 1940:546), except for the Mentelin Bible of 1466 (fig. 3; Landsberger 1940:547).

Another Hebrew manuscript with its original cut-leather binding is the above-mentioned London Ashkenazi Haggadah which was copied by Meir Yaffe (fig. 4; Glatzer, facsimile 1991:140). Its dark brown leather binding (385 X 290 mm) has a delicate cuir ciselé design on the front, which includes in the upper part a partly naked man and woman topped by banderoles, with a plant between them. To the right is St. Michael fighting a prostrate devil with sword and lance. In the lower part is a man in armour, probably St. George, confronting a dragon with a knife (London Ashkenazi Haggadah, facsimile 1985:14, and fig. 8). Kurz noted that the scene of St. Michael fighting the devil in the Haggadah binding is based on an engraving by Master E. S. who worked in theUpper Rhine area between 1440 and 1468 (Kessler 1963:8; Kurz 1965:4). The similar technique and the resemblance of the acanthus scroll and leaves in the Haggadah binding and our manuscript's suggest a close link between them. However, at this stage of research no definite conclusion can be reached as to whether the Haggadah binding was the work of Meir Yaffe or not.

Landsberger suggests that Meir's father, Israel Yaffe, who copied the Darmstadt Haggadah probably inUlm(Darmstadt, HLH Cod. Or. 8), also produced its decorated binding with the same cut-leather technique, and passed this skill on to his son Meir (Landsberger 1940:556ff).

Our manuscript has a piece of paper glued to fol. 52, inscribed with a 15th-century Jewish oath (Judeneid) in German (fig. 5).

The oath contains the text which a Jew has to swear in law suits, evoking the name of the God of Israel, with reference to curses and punishments in the Old Testament which will befall one who does not speak the truth.

Different formulae of the Jewish Oath in German are known from the 12th century and later (e.g. the Erfurt Jewish Oath; see Kisch 1940 (Nuremberg):331; Magin 1999:304). Several 15th-century versions of the from Nurembergappear in the Ratschlagbücher (volume 52A), including documents pertaining to the medieval legal history of the Nuremberg Jews (Kisch 1940 (Nuremberg):25).

A similar version of our Oath is found in an order of 1417 fromNuremberg. It was administered in the synagogue, with the person taking the oath facing eastwards and with his right hand laid up to the wrist on the Five Books of Moses (Barbeck 2002:23). A much more complicated procedure appears in the Law Code of Nuremberg of 1478 (1484), where the Jewish Oath was recited several times in different versions (Barbeck 2002:24-26; Kisch 1940 (Nuremberg):23-38). The Code of 1478 was a result of the reform of the legal procedure begun inNurembergaround 1477. For the Jewish Oath the Council of Nuremberg formed a commission of legal advisors to seek suggestions for a new oath formula (Kisch 1940 (Nuremberg):27).

The oath attached to our Pentateuch suggests that the manuscript was used when a Jew swore on it in court (Barbeck 2002:24), especially since it belonged to theNurembergcouncil as the inscription on the binding attests. Indeed, Kisch mentions that the court secured a genuine copy of the Pentateuch which is unobjectionable and with no translation (Kisch 1949:284). Thus, our 13th-century Pentateuch with its optimal, flawless text which served as an ex