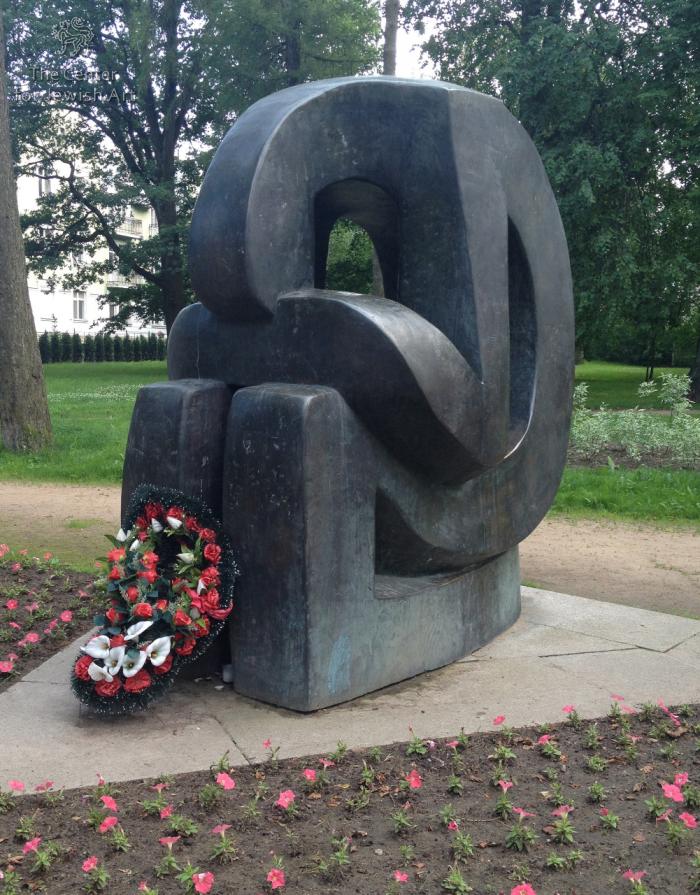 The Jews of Pushkin

The sculpture "Formula of Sorrow" is based on the model by the sculptor Vadim Sidur made in 1972. Of note, Vadim Sidur did conceive the piece as an incarnation of grief caused by wars without any allusions to the Holocaust specifically. The miniature piece depicting a bent figure was scaled up by the sculptor Alexander Pozin; previously he scaled up another sculpture by Sidur  ("Monument to those left without burial" installed in Moscow in 1989). The general design of the memorial was developed by the architect Boris Beider.

The memorial complex comprises the “Formula of Sorrow” monument placed upon the triangle granite base as well as three bronze triangle slabs overlapping each other alluding to Magen David.  The top slab is inscribed in Hebrew and Russian. The figure and the slabs are embayed by another triangle.

Translation: They have shed their blood like water …and there was none to bury them.

A further inscription in Russian reads:

Translation: To the Jews of Pushkin, fallen victims of the Fascist genocide of 1941. 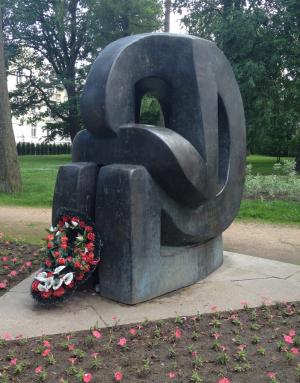 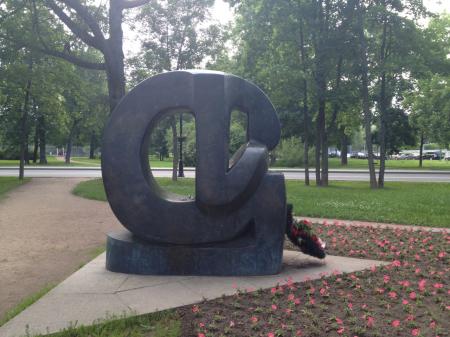 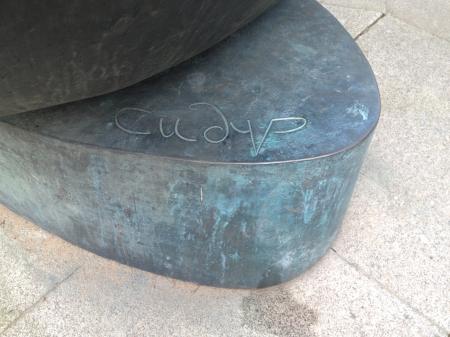 Pushkin (previously Tsarskoe Selo, literally Tsar's Village), a suburb of Leningrad (today St. Petersburg), was occupied by German troops on 17 September 1941. The local Jews were obliged to report themselves to the military police on October, 4th. The same day they were marched to the basement of the former royal residence Catherine's Palace and shot in the next several weeks. According to the estimates, 250-300 Jews were murdered in Pushkin.

In 1986, Jewish activists in Leningrad started to collect testimonies about the murder of Jews in Pushkin. In 1990, the members of the Leningrad Holocaust Research Group suggested putting signs at the murder and burial sites. The permission was obtained but on the pretext that murder and burial sites were located inside the palace park listed as a national monument, a place of memorialization was moved to a close-by square.

The Group chose Vadim Sidur's sculpture "The Formula of Sorrow" (1972) as a model for the memorial. Arkady Zeltser in his books explains the choice of the model the following way:

"The members of the group considered the efforts of memorialization activists to have been a means of opposing the official Soviet policy of consigning the Holocaust to oblivion. In order to maintain the continuity of this activity, they sought to endow the monument with an "anti-Soviet" element. ...Vadim Sidur's sculpture "Formula of Sorrow" ... signaled "anti-Sovietness", insofar as it was a form executed within the framework of avant-garde art, and because Sidur... had been in direct opposition to the authorities during his life [Zeltser, 2018, 334-335].

The expenses for construction were covered by donations from private people and companies.

The dedication of the monument on 13 October 1991 was well attended; delegations from Israel, the USA, Germany, and Finland were present. Masha Rolnikaite, the author of a diary about life in the Vilna ghetto I Have to Tell, was among notable speakers. Since then, the Jews of Pushkin and St. Petersburg visit the “Formula of Sorrow” monument for an annual memorial ceremony on the first Sunday of October.

After the unveiling, the monument suffered several defilements by vandals, including defacements with Fascist swastikas.