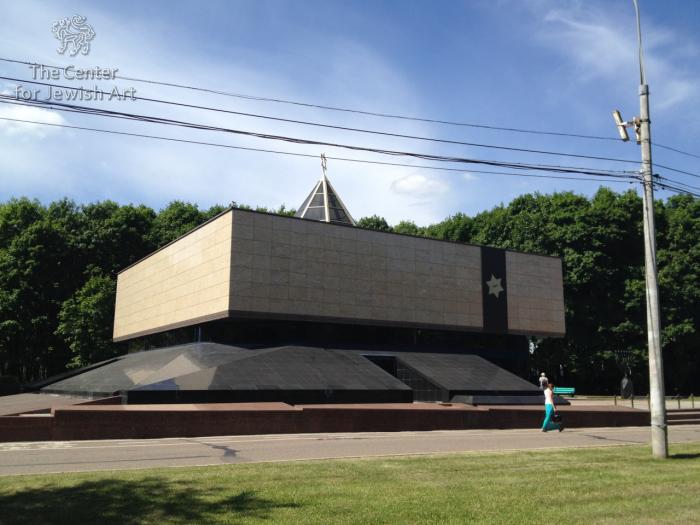 The construction was made possible through a donation by Vladimir Gusinsky and his name is mentioned several times in the inscriptions.

In the vestibule the inscription in Russian reads:

Translation: In the memory of Holocaust victims/ we erected this synagogue./V. Gusinsky/1998

In the prayer hall to the left from the Ark, under the tribes of Israel the inscription in Russian reads:

Translation: Without the past, there is no future/ The past is the memory/For the sake of the future of our people/let us keep the memory about six/ millions of perished/ in the flames of the Holocaust.

To the right from the Ark, under the Torah scroll, the inscription in Hebrew cites the memorial prayer Hazkarat Neshamot and reads:

The Bimah cover has inscriptions in Russian and Hebrew.

Translation: Devoted to all the victims of the Shoah / by Vladimir Gusinsky

Translation: To the memory of the Shoah victims / Devoted by Vladimir Gusinsky 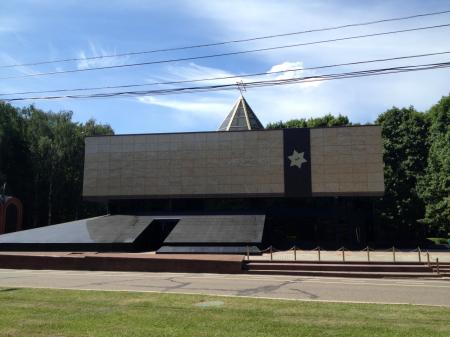 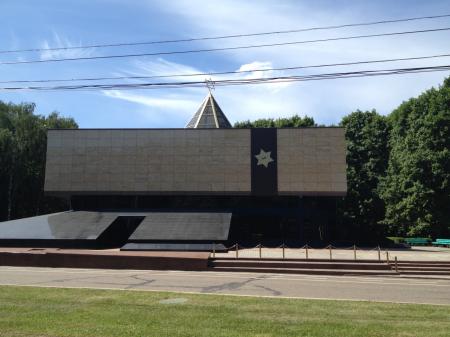 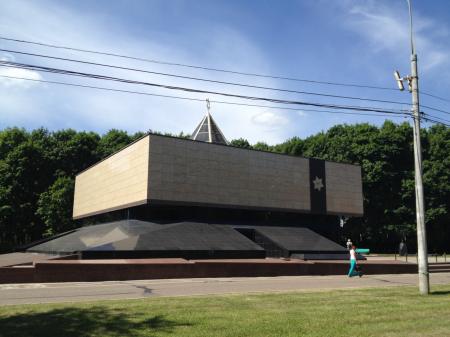 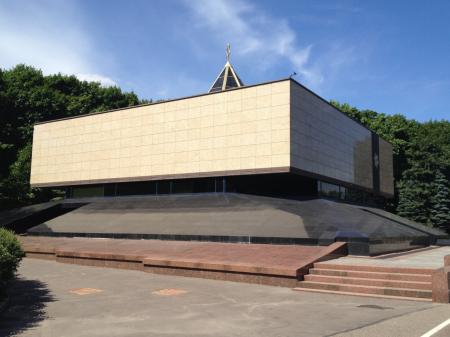 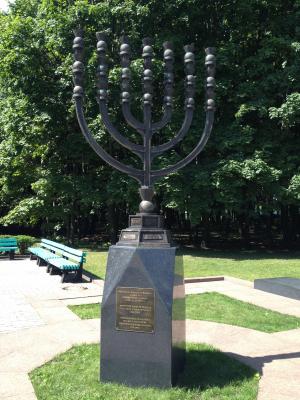 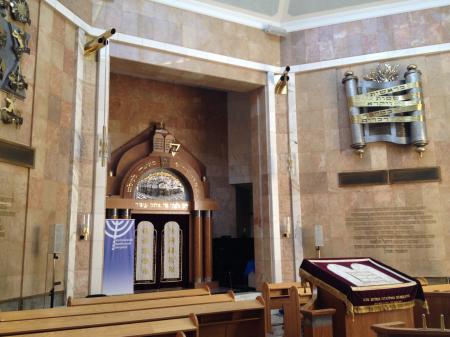 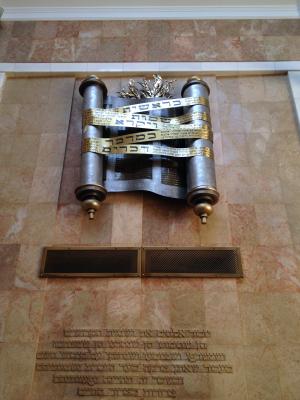 The memorial synagogue is a part of the WWII memorial on the Poklonnaya Gora. This memorial to the Great Patriotic War of 1941-1945 (the closest term in English is the Eastern Front of World War II) is one of the most important Moscow war memorials.

The history of the memorial started in 1958 when a stone was laid on the spot. The development of the memorial was entrusted to Evgeny Vuchetich, the author of the famous memorial in Treptow Park, Berlin. Construction was delayed by protractions, and no ideas of Vuchetich or any other artists, who submitted their projects to architectural contests of 1975 and 1986 were realized. In 1961, a park was laid on the hill.

The memorial as we know it today was conceived in 1992 by the mayor of Moscow Yury Luzhkov. The architect Zurav Zaritelli suggested erecting a Christian Orthodox chapel, a synagogue, and a mosque along with a military memorial. The memorial was unveiled on the 50th anniversary of the victory, May 9, 1995.

and several other memorials as well as exhibitions demonstrating weapons and military equipment. The memorial is constantly expanding and the city authorities add new memorials devoted to WWI, the Soviet-Afghan war, etc.

In general, the memorial is built in such a way that the motives of glory are emphasized, while the motives of grief are underplayed. The mosque and the synagogue are not very well seen in the complex, while the obelisk, the museum, and the church are very dominant and immediately recognized by a visitor.

The synagogue and the museum were established by the Russian Jewish Congress (REK) with the support of the city authorities and financed by the oligarch Vladimir Gusinsky, the Head of REK at that moment. The cornerstone of the synagogues was laid on October 8, 1996. Initially, there was no intention to incorporate a Holocaust museum in the building. The decision was taken at a late stage of the construction. The synagogue was designed by the Israeli architect Moshe Zarchi and Russian architect Vladimir Budaiev (who took part in designing the Victory Obelisk together with Zurab Tsaritelli), the interior was decorated by the Israeli sculptor Frank Meisler.

The exhibition of the Holocaust museum was developed

The opening ceremony on September 2, 1998, was attended by the Russian president Boris Yeltsin and the mayor of Moscow Yurii Luzhkov, who presented the synagogue with a Torah scroll. REK interpreted the construction "as a landmark event in the history of new democratic Russia".