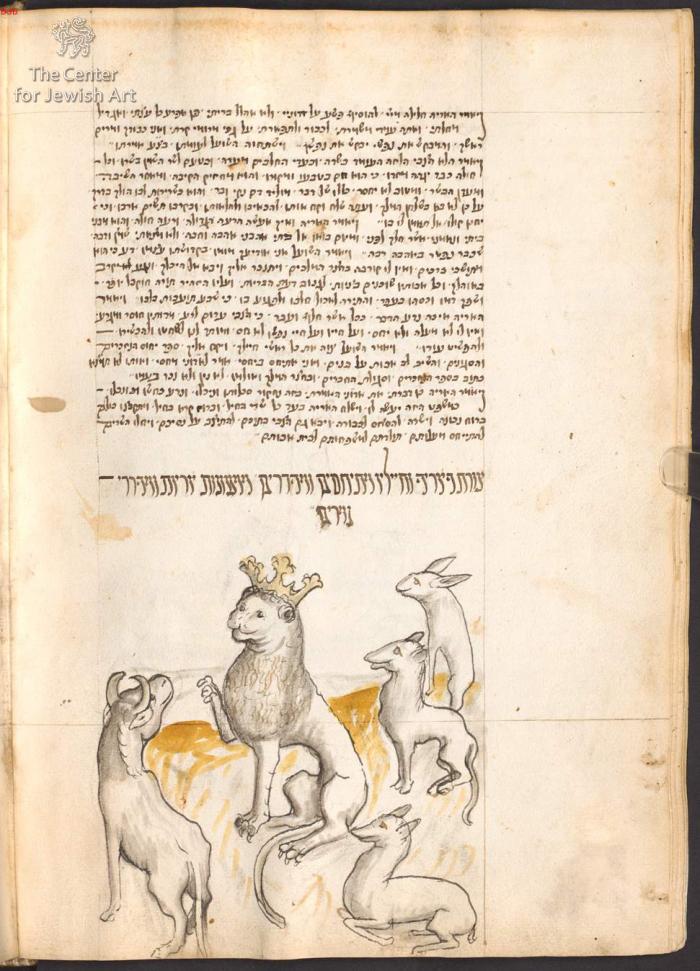 Our manuscript is a miscellany of treatises which includes at its beginning the book Meshal ha-Kadmoni by Isaac ibn Sahula, composed inSpainin 1281. It was copied with five other treatises, philosophical, medical and polemical, by two main scribes, Scribe A-Abraham, and Scribe C-Jacob, with Scribe B writing least, for an unknown intellectual patron.

Meshal ha-Kadmoni is the only illustrated part of the manuscript, except for Sefer ha-Nizzahon (Book of the Triumph) which has some decorated space fillers and catchwords by Jacob, Scribe C.

The five manuscripts are not identical. The text of each story is divided into several episodes which follow similar basic patterns with some variations. The depictions largely follow a uniform iconography and composition and are mostly at the end of the episodes, dictated by the caption or the respective text, but each copy is rendered in a completely different style. Gronemann shows (2006, I:32, 50-51) that the text and titles for the illustrations appearing in the north Italian group of Meshal ha-Kadmoni (Oxf.2, Milano and Rothschild) are based either on our manuscript or, more probably, on a similar copy which transferred this genre from Germany to Italy, since our manuscript apparently never left Germany (see History). For more about the text see Loewe (2004:cxi-cxix).

It is hard to tell whether Ibn Sahula’s original copy included illustrations since no copy has survived from his days or later fromSpain, although in some places in the text the author refers to the astronomical diagrams (fols. 81v, 83, 85, 87v, 89). In any case, there is no way to reconstruct the hypothetical Spanish copy and therefore Gronemann suggests that the 15th-century Ashkenazi illustrations are a new departure which includes up to 85 illustrations (Gronemann 2006, I:29).

The 84 pen-drawn illustrations of Meshal ha-Kadmoni in our manuscript lack 4 scenes (Gronemann 2006, II:Table 4b, lines 19, 20, 22, 62). The illustrations are placed in the centre of the text space below the captions which describe them. They were executed by one artist in greyish-black ink over plummet underdrawings, except for two (fols.1 and 50) by Scribe A, Abraham, who also corrected some depictions in brown ink (see Decoration Programme) and probably executed some of the underdrawing (e.g. fols. 29v, 43). The illustrations present human and animal imagery in different configurations, compositions and postures (fols. 46v, 47v, 70, 71v, 74), in a yellowish-grey landscape and arranged in open and symmetrical compositions.

Robert Suckale suggested that our manuscript was produced in Regensburg in the workshop of the Viennese Martinus Opifex who worked for a while in Regensburg (Suckale 1987:109-110); and further suggested that the cursory and minimal rendering of the illustrations pointed to their being just preparatory drawings (Vorzeichnungen) awaiting completion. Both contentions were later refuted by Simona Gronemann (2006, I:61, 143-150).

Gronemann shows that the style of illustrations in our manuscript is very close to a group of manuscripts from southern Germany, perhaps Swabia, especially to two copies produced in Augsburg in the 1440s: Der Edelstein by Ulrich Boner, Augsburg 1447 (Heidelberg Universitätsbibliothek, MS cpg.314) and a Calendar, c.1457, from Augsburg or Regensburg (Berlin, Staatsbibliothek Preussischer Kulturbesitz, MS mgf. 557).

Together withMunich, these two manuscripts share a seemingly cursory style, shaky lines and scanty thin wash colouring. The figures are voluminous and animated and some of them display extreme gestures. They have large hands and the facial features are minimally rendered with high forehead, closed eyes drawn as two inverted loops, the nose a vertical line with a short horizontal one, and the lips marked by two slightly undulating lines, the upper longer than the lower (Gronemann 2006, I:144 and  comparisons II:figs. 34-48). The style suggestsAugsburgas a possible place of production for the illuminations of our manuscript around 1450 but before 1458, when the owner recorded the birth of his firstborn son (fol. 204v; see History). However, since Jews were expelled fromAugsburgin the year 1438, the manuscript could have been produced before that, or if later, then nearby, perhaps inRegensburg(Gronemann 2006, I:243). 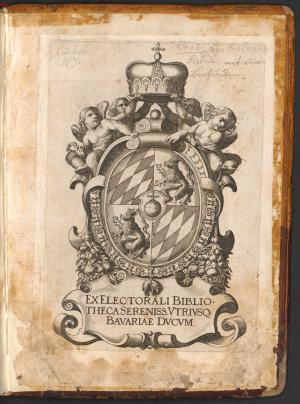 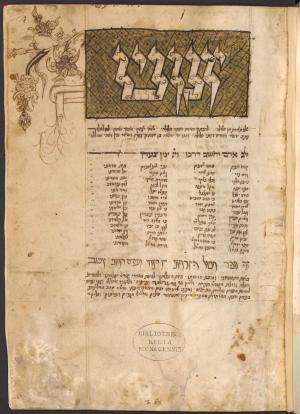 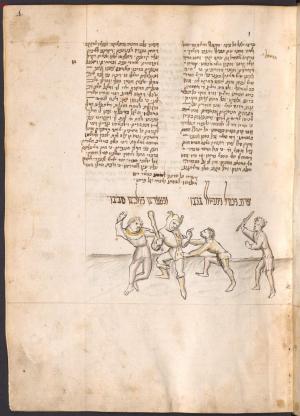 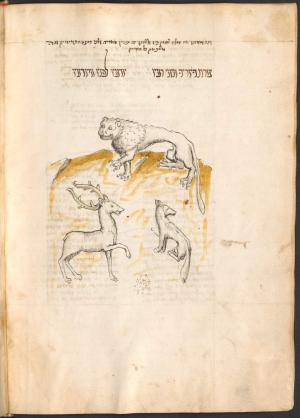 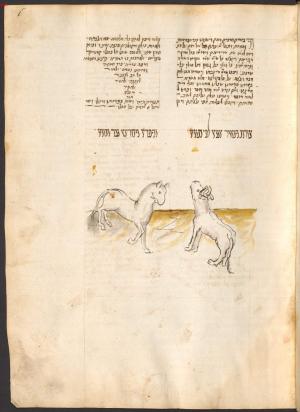 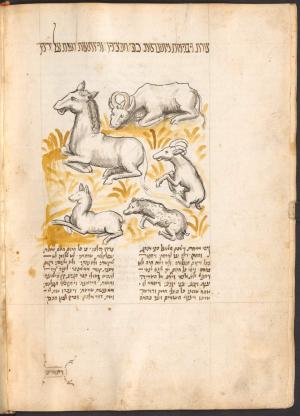 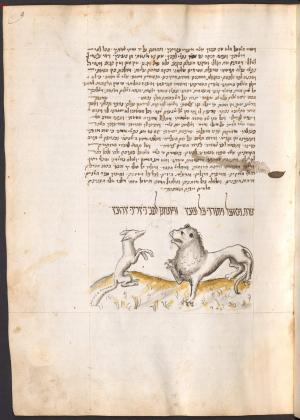 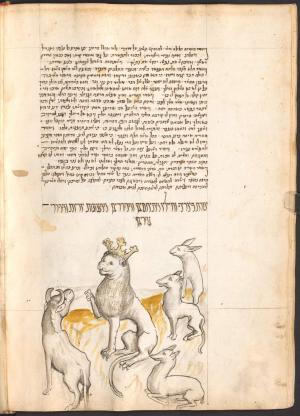 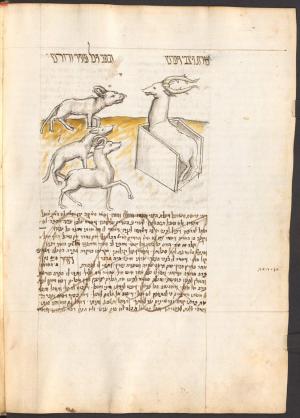 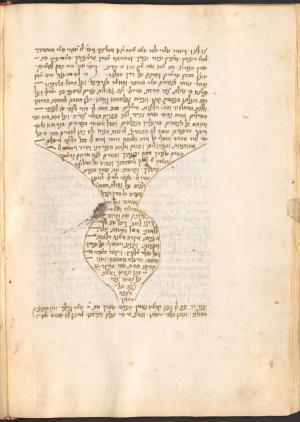 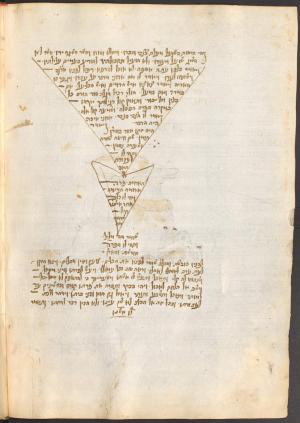 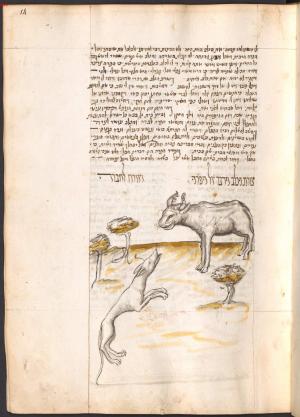 The binding was probably done in the workshop of the court binder Heinrich Peisenberg in Munichfor Duke Albrecht V (cf. EBDB: w003886 for the centre motif and w003886 for the corner motif; Schunke 1958/60:721ff.):

The 80 illuminations of Meshal ha-Kadmoni were executed by one artist, first in plummet and then in dark greyish ink, except for fols. 1 and 50, which were decorated by the main scribe Abraham in brown ink. The figures are economically yet voluminously rendered in shaky black ink outlines over a sketchy plummet drawing which delineates compositions and postures (e.g. fols. 46v, 47v, 70, 71v, 74). The shaky outlines were mostly overdrawn in bold black lines, and the illustrations coloured in grey, yellow ochre and magenta wash.

Moreover, Abraham was not shy in correcting compositions and details which clarify the story or caption. For example, he changed the image of a woman to a man in accordance with the text (fol. 42), added a fifth astrologer on the right of the scene (fol. 79), changed the posture of figures and added identifying attributes (fols. 29v, 43). He covered a crown and other details with silver powder (fol. 33v) and added inscriptions in open books held by the figures (e.g. fols. 22v, 68, 73, 92v), a donkey's saddlebag and astronomical drawings

1. 75 text illustrations for Meshal ha-Kadmoni within the text space, mainly by the artist with additions by

4. Shaped text by Abraham in geometrical forms at the end of sections and sub-sections (e.g. fols. 6v, 11,

for the Book of the Triumph.

2. Decorated catchwords, some zoomorphic, including perhaps a literal one of a ghost (e.g. fols. 117v