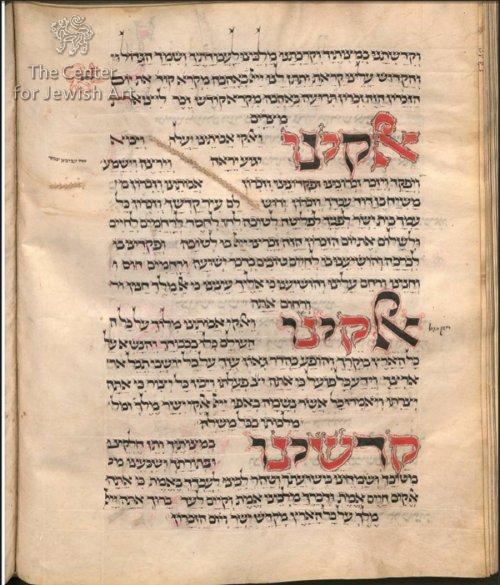 This Munich Mahzor is written in a large format in two volumes and includes the service for the Special Sabbaths and festivals for the whole year (except for the 9th Av and hoshanot). It also contains three of the Five Scrolls for readings on the festival days of Passover (Song of Songs), Shavuot (Ruth) and Sukkot (Ecclesiastes). The other two scrolls for Purim (Esther) and 9th Av (Lamentations) are not included here. The Mahzor was probably intended for a cantor in the synagogue and therefore includes mainly piyyutim and some abbreviated versions of the statutory prayers.

On the other hand, some texts follow the eastern Ashkenaz rite, such as והחיות ישוררו (II:3, 32, 168v, 190) recited at New Year, Day of Atonement, Sukkot and Shemini Azeret, rather than the western Ashkenazi version of והאופנים וחיות הקודש (Goldschmidt 1970, I, p. 53; Goldschmidt-Fraenkel 1981, p. 367). This western version was added in the margin by a later hand on II:3 in semi-cursive script.

Texts usually appearing in medieval Ashkenazi mahzorim of this period are not included here: the ofan כבודו יתרומם ויתנשא for the Special Sabbaths, and שיר הכבוד ושיר הייחוד commonly recited in the Ashkenazi communities from the 13th century at the end of the evening prayer (Goldschmidt 1970, II, p. כט). The text of our two-volume Mahzor was divided equally between Scribes A (16 quires) and B (15 quires). The latter, however, predominated as illuminator, since he decorated his own text (e.g. II:30, 43, 44) as well as that copied by Scribe A (e.g. I:23, 52, 124; II:152v, 161v, 178). The decoration in our Mahzor is executed in brown, red and blue ink.

The style, motifs and technique of the decoration by both scribes are close to the scribal art of the Ashkenazi manuscripts produced from the last quarter of the 13th century to the first half of the 14th century in Franconia and the neighboring regions of south Germany. Some codicological features in our Mahzor, such as the ruling by stylus and barely unnoticeable pricking of the inner margins are typical of manuscripts produced before 1300 (Beit-Arié 1981, p. 84), suggesting this date for our Mahzor.

The dominant elements of the decoration program in our Mahzor are the large and small built-up initial words surrounded by wriggle work, a common feature in Ashkenazi manuscripts of this period. However, the inclusion of specific motifs into the wriggle work by Scribe B, such as human and animal heads, dragons and foliage extensions (e.g. figs. 1, 3, 5), is less widespread and appears in only a few Ashkenazi manuscripts, such as in the Worms Mahzor (fig. 2) and another Mahzor from Franconia of the first quarter of 14th century (fig. 4), where the wriggle work ends in grotesque heads; or in the Abraham's Ashkenazi Mahzor of the 13th-14th century, probably also from Franconia, in which grotesques are integrated into acanthus leaves (fig. 6). A special feature in our Mahzor (I:23 - fig. 7; II:32) and in the Worms Mahzor are the pen-drawn animals enclosed within the letters (fig. 8).

Spared-ground inhabited letters are another type of decoration in our Mahzor (fig. 9).This type, by Scribe B, appears frequently in Ashkenazi manuscripts of the period, for example the David Siddur of 1308 from Franconia (fig. 10).

Indeed, the richest initial word decoration in our Mahzor is devoted to the yozer, which begins with the word "King" (מלך (אמון מאמרך for the second day of New Year (fig. 11). It is surrounded by foliage scrolls inhabited by full-figure creatures. A similar initial word adorns a yozer for the first day of New Year in a contemporary Days of Awe Mahzor, which begins with the word "King" (מלך (אזור גבורה (fig. 12).

Apart from a pair of dragons, which dominate in both initials, our foliate scrolls include several favourite motifs of this period such as a lion, dog, griffin and a knight (fig. 11). Of these motifs, the red lion passant is the only animal illustrating the initial word "King" (מלך). Similarly, another red lion in our manuscript is placed below such an initial word (II:38v - fig. 13) and resembles the red lion illustrating the word "King" in the contemporary Ashkenazi Mahzor (fig. 14).

Motifs unrelated to the text, which were popular in scribal art of the period, are chivalrous and courtly scenes (figs. 5 and 11), a bird of prey and a dog biting a stag (fig. 9). In the Michael Mahzor of 1258 from Regensburg for example, several initial word panels are decorated with knights fighting (e.g. Mich. 617, fols. 4v, 11 - fig. 15).

The vocalization and accentuation bars with dragon heads in our manuscript were used by Scribe A as decorative elements (figs. 16, 18). These also appear in an Ashkenazi Mahzor from the early 14th century, where the bars are composed of dragons, animals, flowers or a hunting scene (figs. 17, 19).

To sum up, the decoration of our Mahzor points to Franconia's its place of production at the turn of the 13th century. Indeed, the text version of the Mahzor, which is basically western Ashkenazi prayers with later additions, suggests that the cantor served a community located in south-western Germany(Fraenkel 1993). 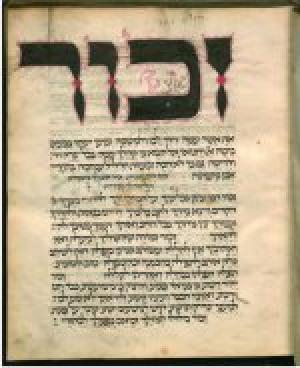 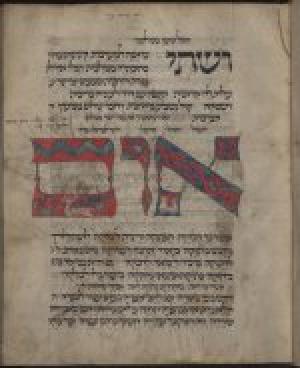 Both sides of the parchment are similarly treated; hair sometimes visible.

The main text is written by two scribes. Each scribe seems to have vocalised the text he copied.

The text is written in square Ashkenazi script in dark brown ink.

The small square script of the massorah for the three Scrolls (I:2-14) and of some marginal notes in both volumes (e.g. II:72v, 134) was apparently written by each of the scribes in turn.

The massorah magna for the three Scrolls (I:2-14): 2 lines in the upper margin and 3 in the lower, mostly cropped.

In vol. II there is additional vertical ruling in plummet within the text space for its special layout (e.g. II:6).

Not noticeable, i.e. the inner margins were not pricked.

The manuscript was written and decorated by Scribes A and B. Each scribe wrote his own built-up letters in brown and red ink at the beginnings of main sections (6-12 lines high) and sub-sections (2-5 lines high).

However, their elaborate decoration and the red wriggle work surrounding them, also in the sections of Scribe A, were done by Scribe B. Scribe B's built-up display letters of are more elegantly undulating and have more serifs than the straight square ones by Scribe A (cf. II:34v-35, 80-86 by Scribe B; and I:179v-181 by Scribe A). However, one should note that Scribe A can emulate the script of Scribe B when the hands change (cf. II:116v by Scribe B with II:117 by A).

1. Elaborate initial words: The built-up letters are by Scribe A; however, the decoration is by Scribe B. One initial word is decorated with dragons, animals and a hunting scene (אום, I:37); a second is surrounded by intertwined dragons, a knight confronting a lion, a dog and a griffin (מלך II:30; cf. II:31v, 168); and a third one is decorated with two facing dragons within the letter I:23(זכור). 2

alternating red and dark brown ink, all decorated by Scribe B with wriggle work and foliage

IMHM Jerusalem, Institute for Microfilmed Hebrew Manuscripts, at the National Library of Israel