The manuscript with its large dimensions is a typical Franconian liturgical Pentateuch of the second half of the 13th century. It can be attributed more specifically to the last decades of the 13th century from its mixed practice of ruling: the pricking in both outer and inner margins is “modern”, whereas the ruling by stylus keeps to the “old” method (Beit-Arié 1981, p. 84). It is written in three columns with the massorah and the Targum verse by verse, and in addition to the haftarot and Five Scrolls it contains the book of Job and sections of Jeremiah (1:1-23:6) and Isaiah (34:1-35:10). Apparently it was intended for reading the haftarot in the synagogue rather than for personal use (Shalev-Eyni 2010, pp. 9-10 and n. 55). 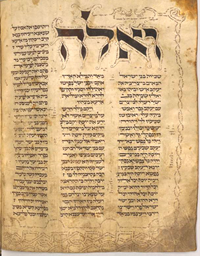 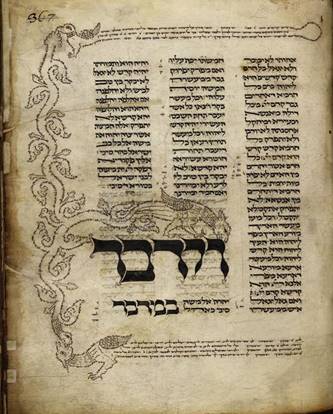 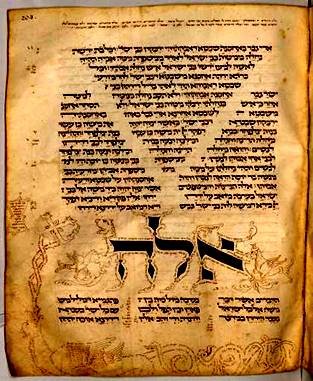 The micrographic decoration of our Pentateuch recalls several South German Bibles produced in the last decade of the 13th century. Compare for example our manuscript (fig. 1) with the 13th-century South German Bible in London (fig. 2). In both the geometrical and dragon motifs surround the text space as well as the initials and extend along the lower margins, similar to the South German Jonah Pentateuch of c.1300 (fig. 3).

The geometrical interlaces with pen-drawn dragon's heads at their ends on the left of the lower margins of our Pentateuch (figs. 1, 4), are similar to another Franconian Bible of 1294/95 (fig. 5). 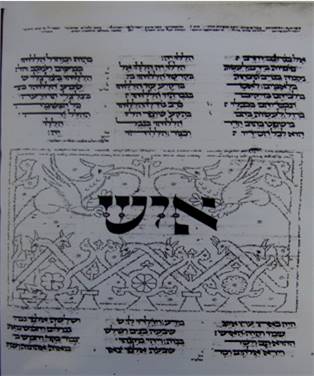 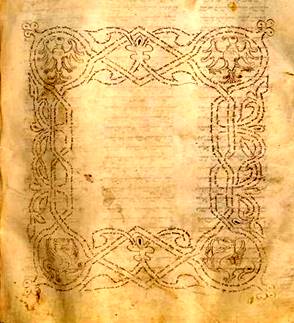 Of special interest is the full-page micrographic panel at the end of a quire in our manuscript (fig. 6). Its broad frame recalls in shape and details the micrographic panel framing the initial word opening the book of Joshua in the Franconian Prophets and Hagiography by Pesah ben Ephraim of c.1300 (fig.7). Both panels contain inhabited medallions, and those in the upper corners enclose similar heraldic eagles. 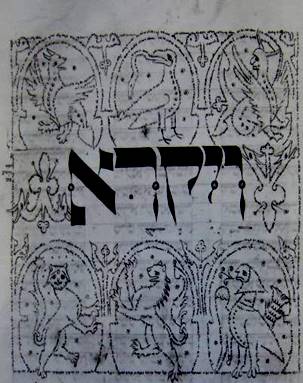 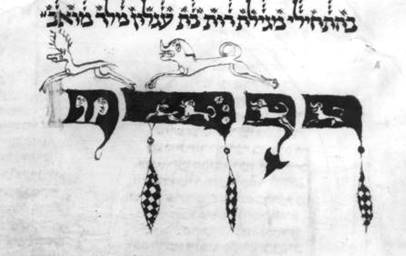 A noteworthy drawing in our manuscript is that of the two dogs at the end of Exodus chasing an animal which is out of sight (fig. 10). This snippet of a popular hunting scene (fig.11) suggests that the two dogs serve as a decorative motif rather than a symbolic one (see remarks in Munich, BSB Cod. hebr. 5, fol. 122v).

The only text illustration in our Pentateuch is of the Hanging of Haman and his ten Sons on the gallows (Esther 7:10, 9:6-10; fig. 12). The dangling figures outlined in the micrography of the massorah magna are similar to the dangling birds (fig. 13), and recall the Four Creatures of Ezekiel’s Vision, illustrating the text in the Jonah Pentateuch from South Germany of c.1300 (fig. 14).

The hanging of Haman and his Sons is often depicted in the Jewish art of Western Europe from the 13th century on, but the iconography differs from our manuscript. In Ashkenazi Bibles and mahzorim Haman and his sons are usually hanged from the branches of a large tree, which fills an entire text column. One example is in the Kalonymos Bible from Ulm of 1238 (Wrocław, University Library, M.1106, fol. 301v; Narkiss 1986, p. 82, fig. 5; Sternthal 2008, p. 51). A similar depiction is found in the Michael Mahzor from Regensburg of 1258 (Oxford, Bodleian Library, Mich. 627, fol. 15), as well as in the Laud Mahzor from Franconia of c.1260 (fig. 15). 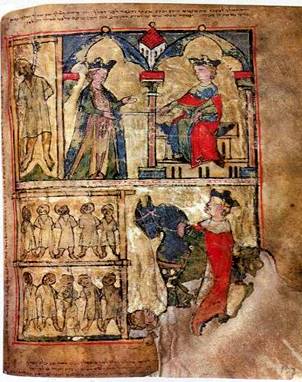 However, a comparable scene to that in our manuscript, albeit depicting a two-tiered gallows, is found in the Regensburg Pentateuch (fig. 16). Haman is hanging separately above his sons. A similar gallows appears in another Ashkenazi Liturgical Pentateuch from Northern France of the mid-13th century (fig. 17). In this example the sons are not depicted but represented by ten double ropes arranged in two tiers; that for Haman is missing.

The hanging of Haman and his Sons is unique to Ashkenazi iconography. They are considered descendants of Amalek, and like him were destined to annihilation (Horowitz 2006, pp. 95-96). Since the Ashkenazi Jews suffered frequent persecutions at that period, the depiction of the hanging of Haman and his sons alludes to their wish to see the destruction of their enemies (Kogman-Appel 2005, pp. 187-208). On the other hand, in Christian art Haman is usually depicted hanging without his sons, as a prefiguration of the crucifixion of Christ. One example is in the Hortus Deliciarum from Alsace of 1167-1185 (fig. 18).

Fig. 18: Hanging of Haman Hortus Deliciarum Alsace, before 1176 - c.1196 (Green et al. 1979, fol. 60v, fig. 89) In our Pentateuch, Haman, and his Sons are depicted without heads (fig. 12). The convention of avoiding human features or distorting them by depicting hidden faces or animal heads was prevalent in South German Hebrew manuscripts of the 13th and 14th centuries. Yet the way chosen by our artist to avoid showing the human face is unique: each pair of figures shares a single visor without heads, recalling that in the Michael Mahzor of 1258 (e.g. fols. 4v, 11; van Boxel and Arndt 2010, p. 49, fig. 27). The phenomenon of avoidance of human features in Ashkenazi manuscripts has been studied by several scholars over the last sixty years (e.g. Ameisenowa 1949, pp. 21-45; Narkiss 1983, pp. 49-62; Mellinkoff 1999) though without a satisfactory conclusion.

In the late 16th or the beginning of the 17th century, our manuscript was in the possession of Shlomo Ulma of Augsburg or Prague (see History) who owned two other manuscripts: the French Talmud of 1342 (Munich, BSB Cod. hebr. 95), and the 1309 Levy Pentateuch of Brussels (Hamburg, Staats- und Universitätsbibliothek, Ms. Levy, 19). At some point, the Ulma family sold our manuscript to the Stadtbibliothek Augsburg olim MS 98 (now Staats- und Stadtbibliothek Augsburg), from whence it reached in 1806 the Hofbibliothek in Munich, together with 113 manuscripts and prints (informed by Dr. Paul Gerhard Dannhauer, former curator of the Oriental Manuscripts Department in BSB Library, Munich). 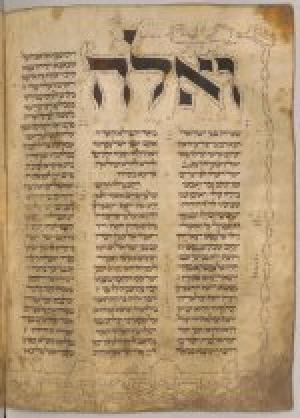 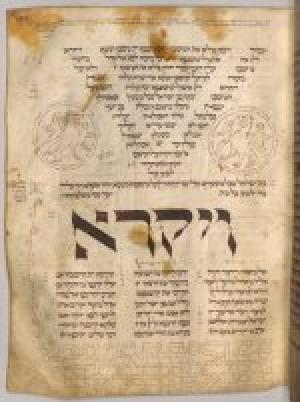 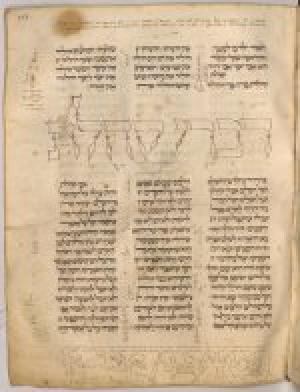 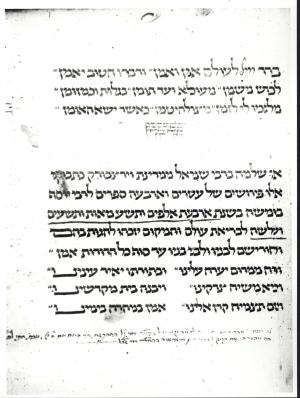 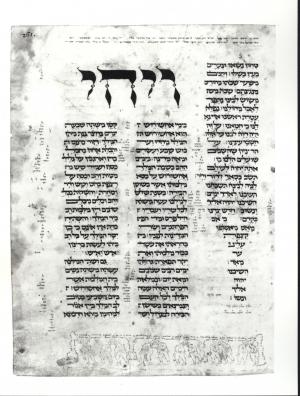 Two scribes: Scribe A: The main scribe writes most of the text (fols. 1-317v) and all the plain and decorated massorah, except that of Scribe B. Scribe B: Text of fols. 318-331v: the massorah in foliate roundels in the lower margin and outlines of the initial word דברי (fol. 318: Scribe A writes the plain massorah to the end).

Catchwords Horizontal undecorated catchwords to quires in square script in the lower left-hand corner of the last verso of almost every quire.

None Blank leaves None

Scribes
Script
Number of Lines
Ruling
Pricking
Quires
Catchwords
Hebrew Numeration
Blank Leaves
Direction/Location
Façade (main)
Endivances
Location of Torah Ark
Location of Apse
Location of Niche
Location of Reader's Desk
Location of Platform
Temp: Architecture Axis
Arrangement of Seats
Location of Women's Section
Direction Prayer
Direction Toward Jerusalem
Coin
Coin Series
Coin Ruler
Coin Year
Denomination
Signature
Colophon
None
Scribal Notes
Scribal notes: Fol. 40, at the end of the lower massorah:שגיתי בזה כי הוא שייך למעלה בעמוד (I erred since it belongs at the top of the page). Fol. 197v, correction of a text missed by the scribe. Fol. 277, outer margin, inscribed in dark brown ink in semi-cursive script: כאן מסיים ההפטרה/ ודילגתי לעיל כי לא/ מצאתי בטופס יותר/ וההפטרה מתחלת/ ויהי ימים רבים (The haftarah ends here, and I skipped the preceding (text), for I did not find more (text) in the exemplar; the haftarah, however, starts with "And it came to pass after many days" (I Kings, 18:1; according to the Ashkenazi rite, haftarah to Parashat Tisa תשא is read in the month of Adar)). A similar inscription appears in the inner margin of fol. 277v: הפוך הדף/ לעיל ותמצא/ כל ההפטרה/ עד ה' הוא/ האלהים (Turn back the leaf and you will find the entire haftarah until the “Lord is the God” (I Kings, 18:39)). Fol. 305v, at the end of the haftarot section, is a rhymed inscription in a semi-cursive script: נשלמו הפטרות של כל השנה שבח ותודה לשוכן מעונה (The haftarot for the entire year were completed, praise and thanks to the Lord). Massoretic notes by Scribe A: The massorah magna, written along the outer margin, is accompanied by a note within a frame stating that it should have been written at the top of the page according to Tikkun Ezra, e.g. fol. 82v: הבאים/ בראש/ הדף/ תיקון/ עזרא/ הסופר, and fol. 107v: שמר/ בראש/ הדף/ תיקון/ עזרא/ הסופר. Fol. 139, in the outer margin inscribed: מפי מור' ה'ר'/ שמשון/ נקדן (According to my teacher, Shimshon the vocalizer).
Watermark
Hallmark
Group
Group
Group
Group
Group
Trade Mark
Binding

German binding of the end of the 16th century, probably done while the manuscript was in the possession of the Ulma family (see History).

Similar off-white front and back leather covers on wooden boards. In the centre of each cover is the imperial emblem of a double-headed eagle with a scepter and globe, over stamped on an octagon which originally decorated the centre of both covers. The emblem is enclosed in rectangular frames, some of which are blind-tooled with foliate scrolls.

The spine has four double-cords with head and tail bands. A piece of brown leather is stuck on to the spine with a gold-tooled frame and inscription: BIBLIA HEBRAICA. On the upper part of the spine is an effaced inscription in Hebrew חמש מגילו(ת) (Five scrolls) and an illegible cursive inscription in Latin.

Vestiges of double clasps on the front and back covers. The last back flyleaf has a watermark of a lion rampant, facing left, in a crowned shield with two handles, over the monogram ML (no exact match was found). The countermark on the first flyleaf has the monogram TSB (similar to Heawood, No. 3134, Nuremberg 18th century).

The decorated massorah was mostly done by Scribe A, the main scribe and massorator. Scribe B, who wrote the last folios (fols. 318-331), executed only the massorah of the opening page in foliate roundels and the outlines of the initial word of the book of Jeremiah (fol. 318).

The decoration consists mainly of geometrical, vegetable and zoomorphic interlaces of micrographic massorah especially in the lower margins at the beginning and end of books. It includes one text illustration, the Hanging of Haman and his Sons at the beginning of the Esther Scroll (fol. 261). In one case the massorah is incorporated into a full-page decoration (fol. 153v)

. I. Decorated massorah in micrography:

1. One text illustration of the Hanging of Haman and his Sons in the lower margin on the opening page of the Book of Esther (fol. 261).

2. One full-page micrographic decoration between the books of Leviticus and Numbers (fol. 153v).

II. The decorated initial word of almost every book is written in display letters in brown ink (height 6-9 lines) with decorated vowel points, except for Ecclesiastes whose initial word letters are in ink outline (fol. 252), probably intended to be filled in with brown ink. The initial words of Exodus, Deuteronomy, Song of Songs and Jeremiah (fols. 64v, 204, 256v and 318) are outlined in micrography (see above).