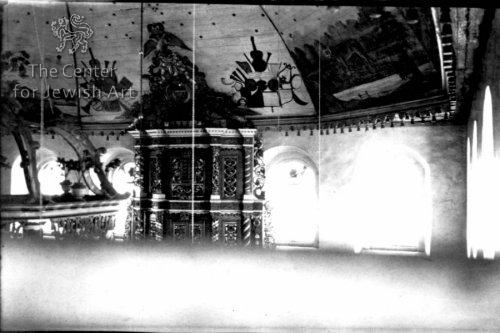 According to the pre-war photographs and Vitberg’s memoirs, the prayer hall was spanned by an octagonal wooden cove dome. It was painted as a starry sky with a large Star of David on the eastern facet, above the Torah ark. In the lower part of the same facet, flanking the top of the Torah ark, two groups of musical instruments were depicted, referring to Psalm 150: “…Praise [the Lord] with the sound of the trumpet! Praise Him with the psaltery and harp! Praise Him with the tambourine and dance! Praise Him with stringed instruments and organs! Praise Him upon the loud cymbals! Praise Him upon the high sounding cymbals! Let every thing that hath breath praise the Lord! Praise ye the Lord!” On four side facets the four animals were depicted, referring to the saying from the Mishnah: “Judah ben Tema said: be strong as the leopard and swift as the eagle, fleet as the gazelle and brave as the lion to do the will of thy Father which is in heaven” (Avot 5:20). As seen in the photographs, the western facet depicted the burning town (Jerusalem, according to Vitberg’s memoirs), the northwestern one bore a landscape, and the southeastern one – a depiction of a town.

The Torah ark at the central bay of the eastern wall was a multi-tiered wooden structure based on a sinuous ground plan. It was preceded by stairs, on the right side of which stood an amud. The ark was supported by two wooden statues of fantastic sitting lions, one of which was photographed in 1929. Each of the three tiers of the ark comprised four columns with decorated panels between them. The tiers were divided by broken architraves. The Torah shrine was situated in the first tier; a pair of white doves was placed above it. The second tier contained a closet for the megilot and the third was decorated with the Tablets of the Law. The ark was topped by a carved eagle “with a basket of fruit from the Land of Israel in his beak.”

The wooden octagonal bimah in the center of the hall was surrounded by high slender white-painted columns with “dolphin’s back” trabeated canopy, with two short flights of stairs on its southern and northern sides. The women’s section was situated on the west, on the first floor, separated from the hall by wooden arcade with a latticed meḥitsah. 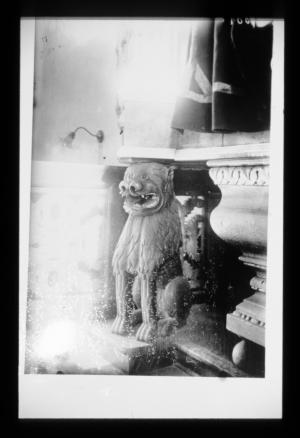 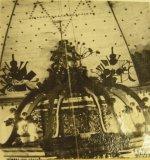 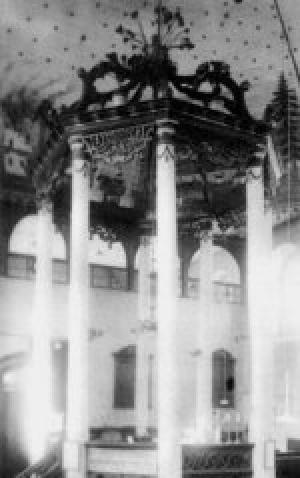