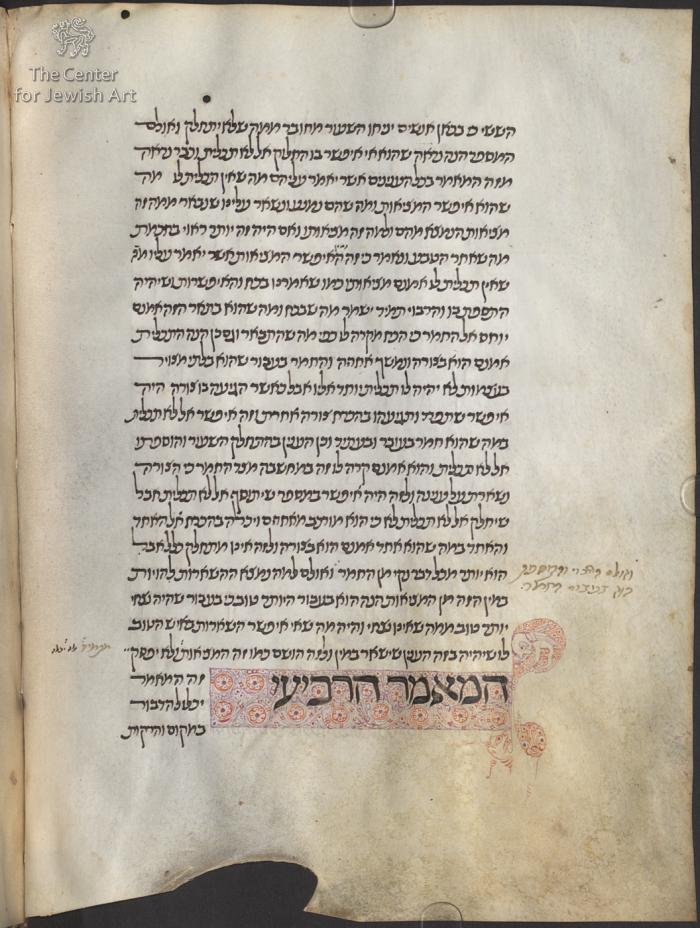 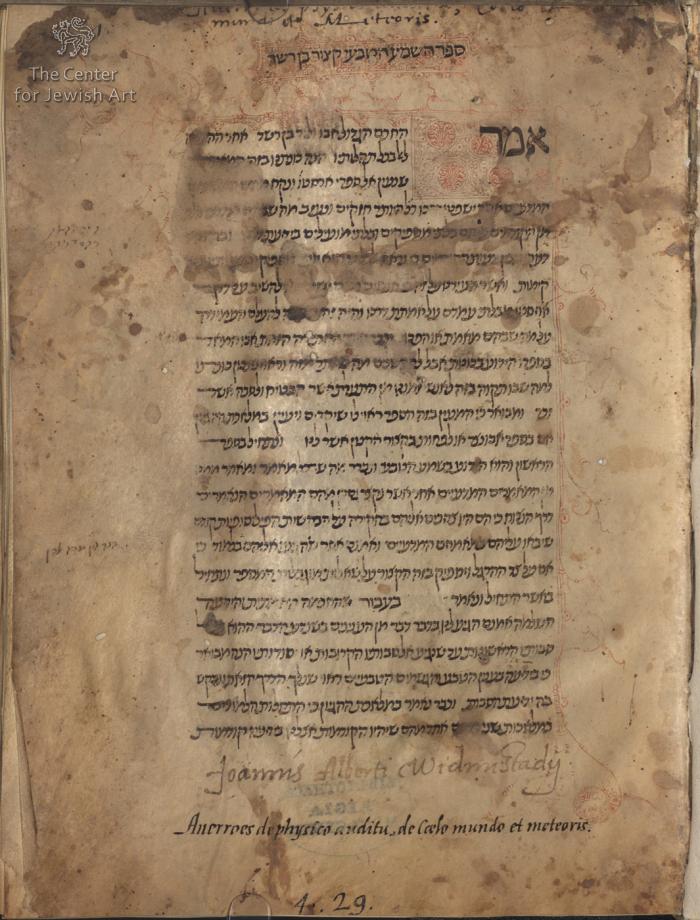 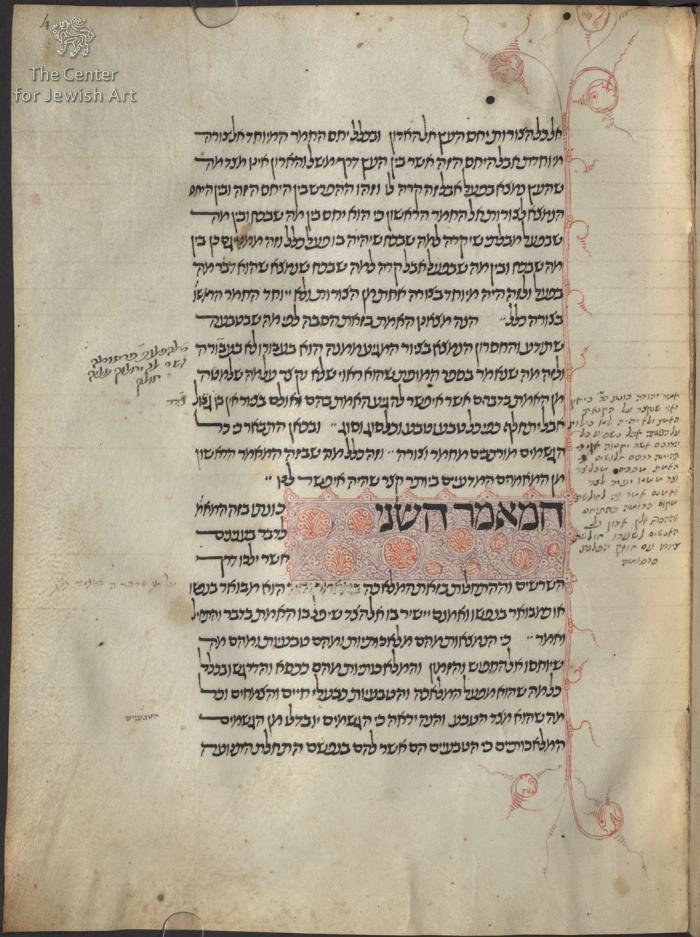 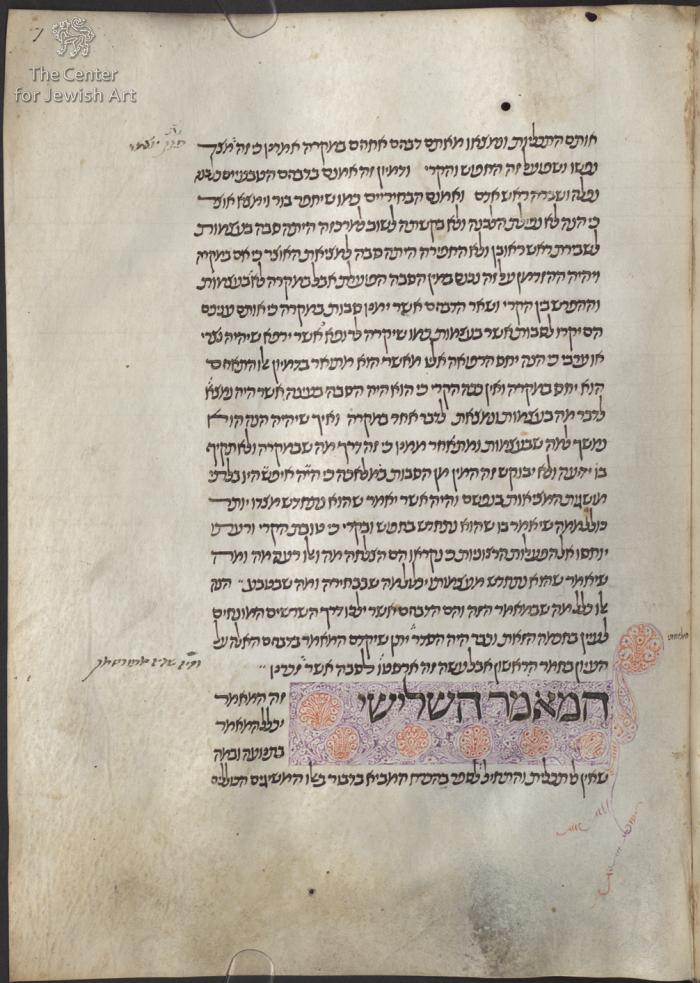 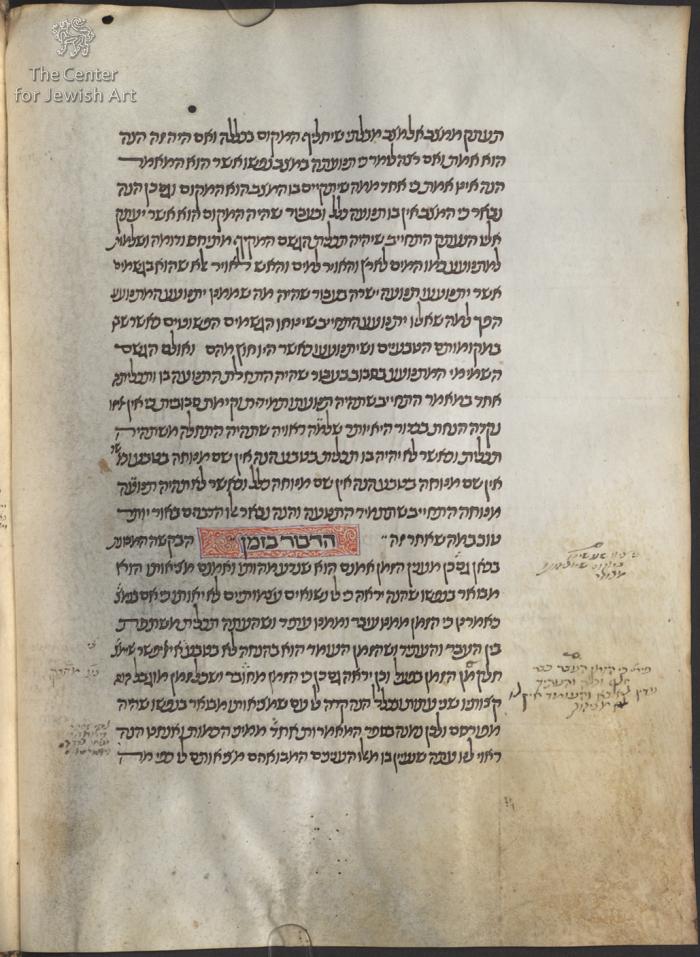 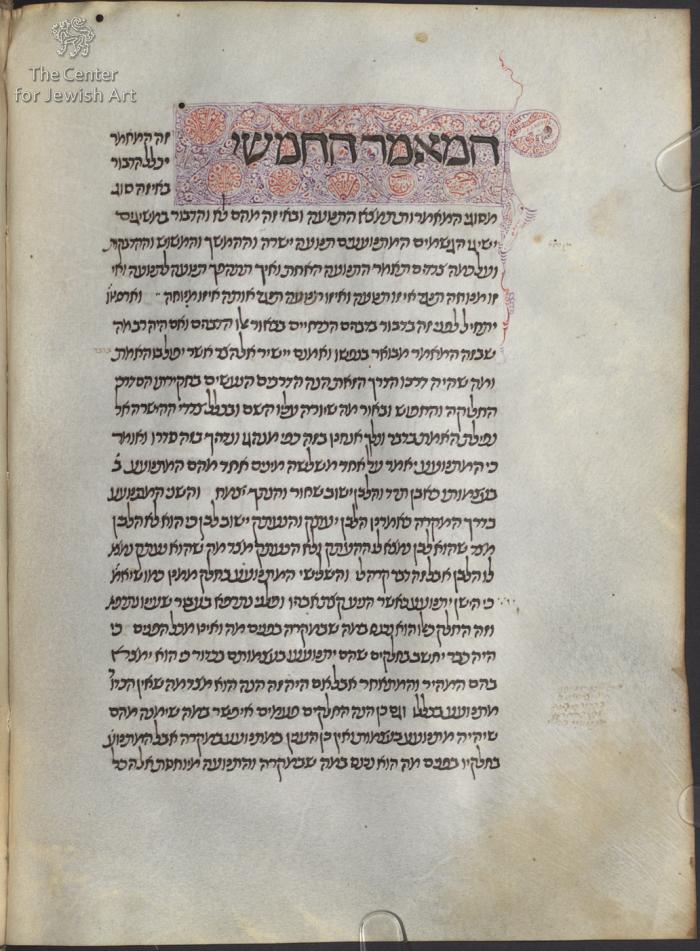 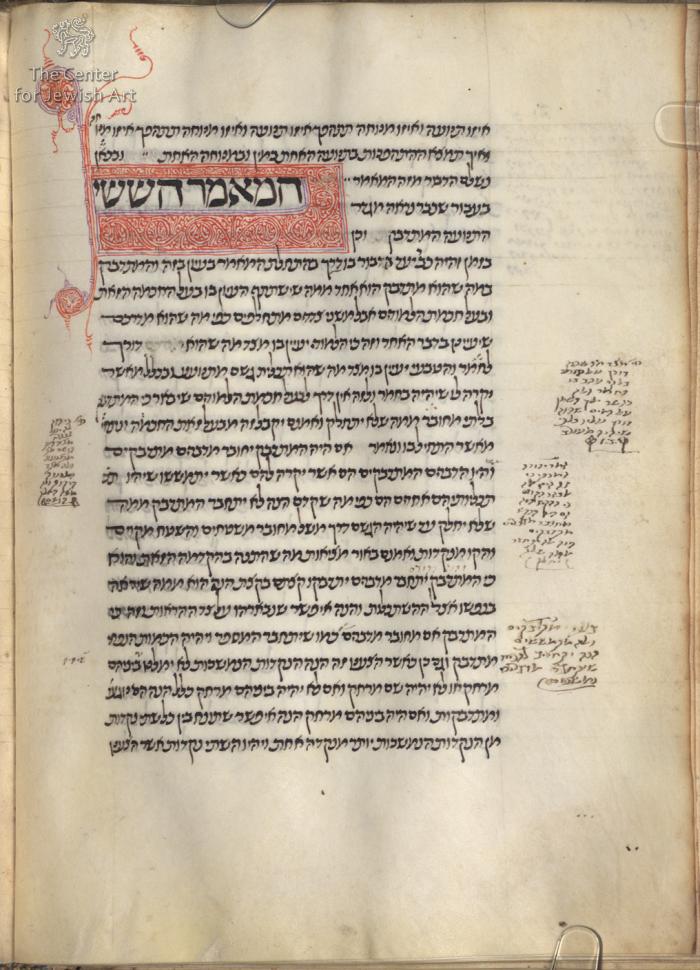 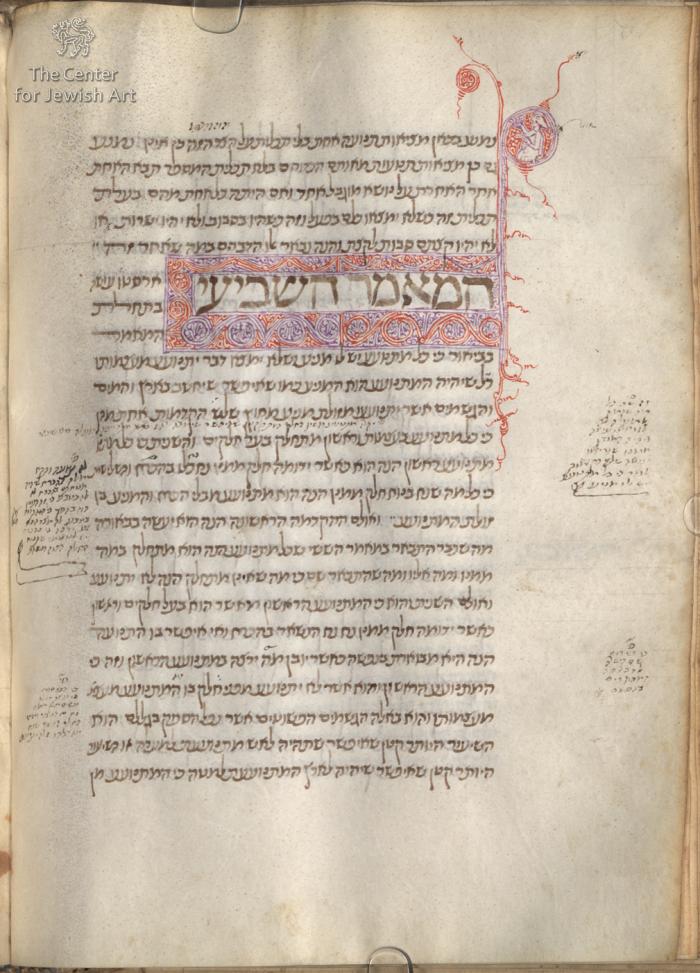 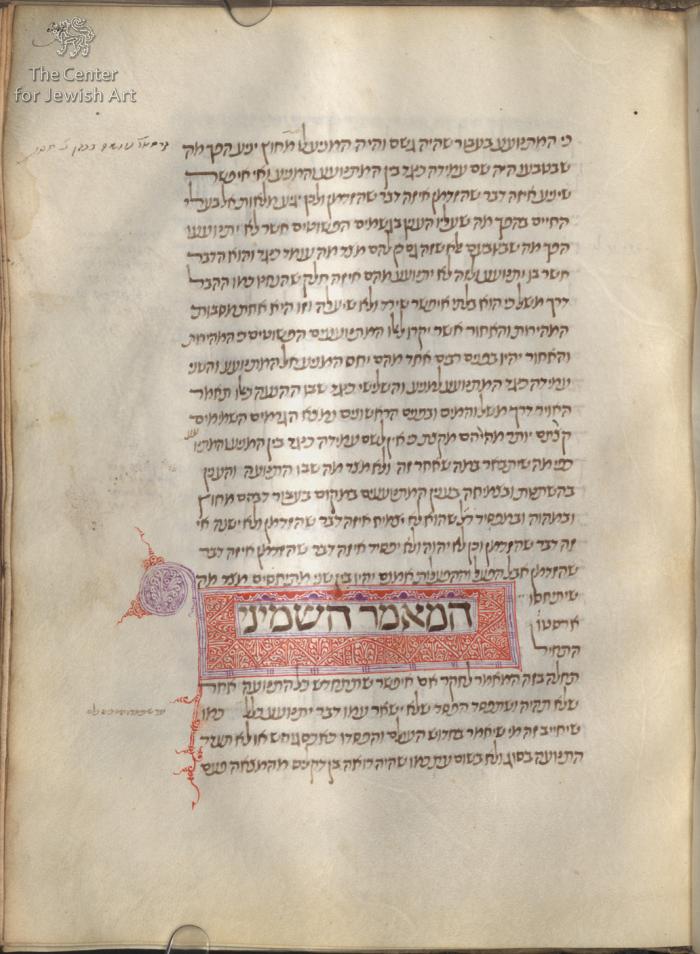 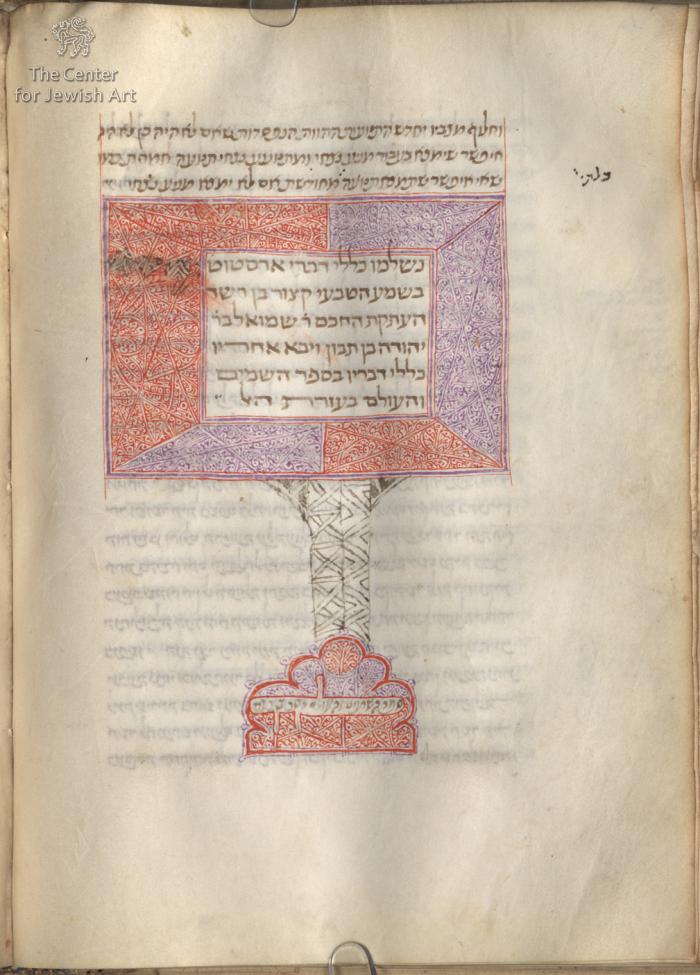 The spine has three double cords and head and tail bands.

The decoration consists of filigree initial word panels which appear in the first six quires of the manuscript, i.e. the first book (fols. 1-46v) and the first folio of the second (fol. 47). It was done by two hands: the Scribe decorated the first three quires (fols. 1-23), and the Artist continued with the following three (fols. 24-47, also decorating fol.16v).

The main decoration was carried out by two hands, the Scribe and the Artist, following the writing of the text, and appears in the first six quires at important divisions. The decoration consists of filigree panels enclosing the initial words. Out of the 11 initial word panels those in the first three quires (fols. 1, 4, 7, 12v, 20v) were decorated by the Scribe. His panels are filled with filigree penwork forming a background to the letters in a unified dense composition. By contrast, the other panels by the Artist (fols. 16v, 25v, 34v, 39, 46v, 47) frame the letters with filigree penwork, leaving the initial words on the parchment ground.

Both filigree compositions show a fan-shaped club motif and scroll design, but they differ in style. That by the Scribe, despite its density, is delicately and precisely executed, integrating human and animal heads within the main fields and in the marginal flourishes. The filigree design by the Artist is somewhat simpler and stiffer. The undulating scrolls are replaced by straight and angular stalks (e.g. fol. 39), and the use of alternating deep blue and red colours divides the panels into compartments (e.g. fols. 46v, 47); only a few figures are integrated in the marginal flourishes.

The fan-shaped filigree type is an early phase of filigree decoration, originating in an area under strong French influence. For example, the filigree design appears in the Paris Pentateuch (BnF hébreu 36; Sed-Rajna 1986/87, fig. 1) written in 1306 inPoligny in the Duchy of Burgundy. A later phase of filigree scroll- work consisting of a spiral pattern occupies the filigree panels of the Ashkenazi manuscripts produced during the years 1330-40 in the Upper Rhine region, for example the Vienna-Jerusalem Mahzor (ÖNB cod. hebr. 163 - NLI Heb. 8°5214), the Vienna SeMag (ÖNB cod. hebr. 34/I-II) and the Cambridge Hagiographa (CUL MS Ee 5.9) (op.cit., figs. 2-6).

הקשבFor some unknown reason the decoration of theMunichmanuscript was never completed. The sections of the second and third books were not decorated although space has been allocated for it.

The manuscript belonged to the orientalist Johan Albrecht Widmanstetter (1506-1557), and was acquired by Duke Albrecht V in 1558, together with his library.