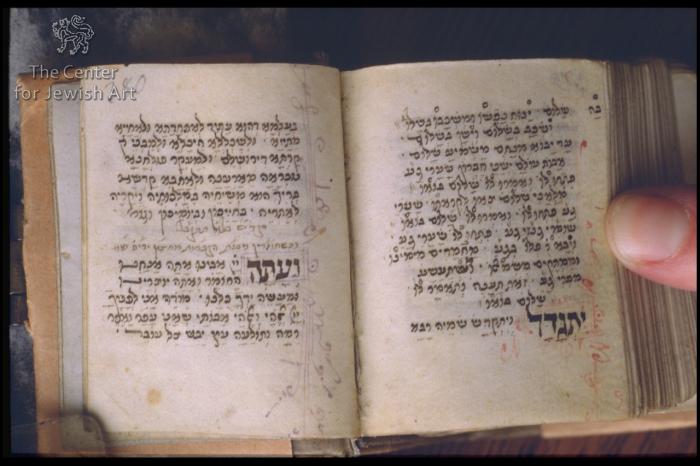 The present manuscript is a siddur of the Roman rite for the entire year. According to the colophon (fol. 382v), it was copied on6 October 1492 (15 Tishrei [5]253) by Joseph b. Samuel of Rossano (a section of Canossa, in theprovince ofReggio-Emilia, Emilia).

The decoration of the manuscript was executed by two different hands. The first hand seems to be that of the scribe Joseph ben Samuel, who added some marginal drawings including four text illustrations, three of which are in the Haggadah for Passover, as well as simple pen decoration for letters and initial words (see: Decoration Program). Besides the evidence that the ink used for the decoration is very close to that of the script, the contact between the script and the decoration is particularly visible in those drawings stemming from the descenders of letters, such as on e.g. fols. 108v, 113v, 222 and 368.

The second stage of the decoration consists of many simple red filigree initial words panels (except for one executed in violet ink (fol. 380). This type of decoration was possibly rendered by another hand, which sometimes passes over the script, (e.g. fol. 86) and the brown-ink decoration; the styles, though both very simple, do not seem have done by the same hand. These pen-work flourishes, incorporating buds and foliage, are very common in Northern and Central Italy during the 15th century, and comparisons can be made with other manuscripts produced in Northern Italy such as from the 1490 mahzor at the JNUL, MS. Heb. 8 4450 and the appertaining second part in the Weill collection,Jerusalem (see: Metzger, 1976, No. 174 and fig. 10; Cohen, 1989, Kat. No. 46, fig. 81) that was written by Leon Yehuda bar Yehoshua (de Rossi) ofCesena.  There are also similar forms in Biblioteca Ambrosiana inMilan, Ms. A 192 (see: Luzzatto-Mortara Ottolenghi, Tab. VII).

The same scribe, Joseph b. Samuel of Rossano copied five years later, in 1497, amahzor of Roman rite of which only the second volume survived (for Shavuot to Simhat Torah, Parma, Biblioteca Palatina, Parm. 3493; see: Richler cat. No. 943), sparsely decorated with similar "crude" style, such as the drawing of the arm and raised hand drawn on fol. 719). Joseph b. Samuel of Rossano is mentioned in two sale inscriptions found at the end of another manuscript:  "Sefer Hashorashim" by David Kimhi, (Breslau - Juedisch-Theologisches Seminar 65, fol. 235v): in the first inscription he is recorded as the purchaser of the manuscript, in 12 December 1494, while in the following inscription, Joseph ben Samuel himself testifies he sold the manuscript on 18 June, 1495 to Joseph ben Judah of Ancona.

In conclusion, Cod. Hebr. 87 is a witness of the continued production of Hebrew manuscripts decorated by pen-work in Northern-Central Italyat the end of the 15th century. 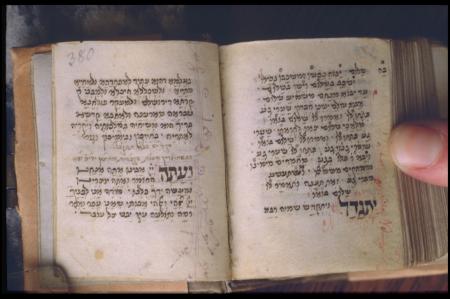 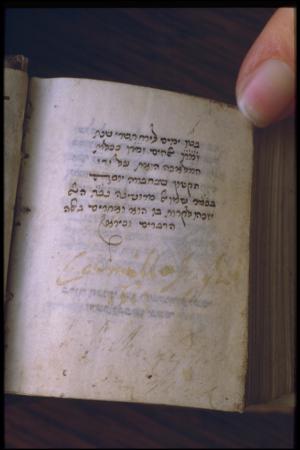 Written in one text column

No pricking is discernable