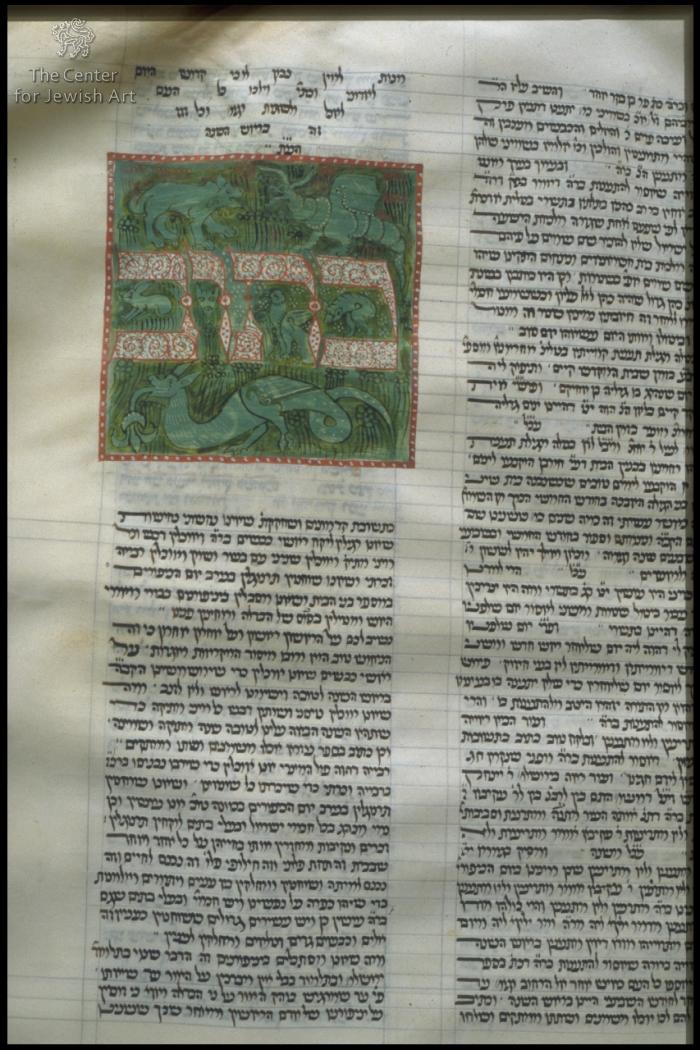 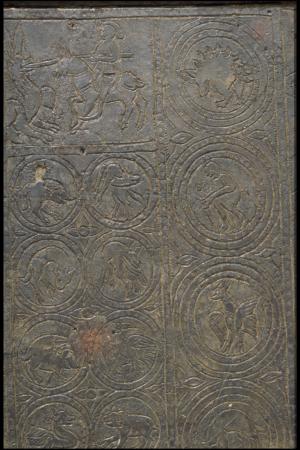 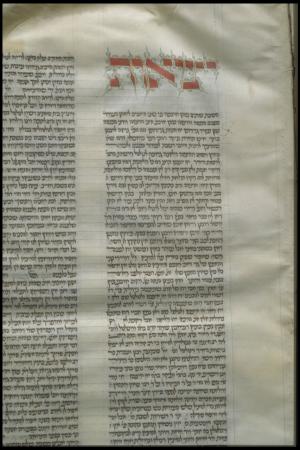 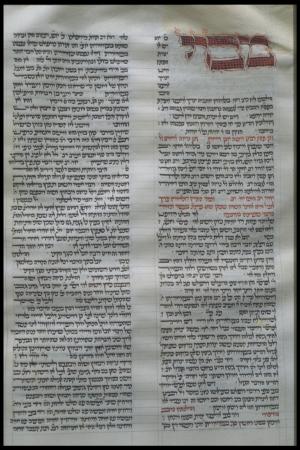 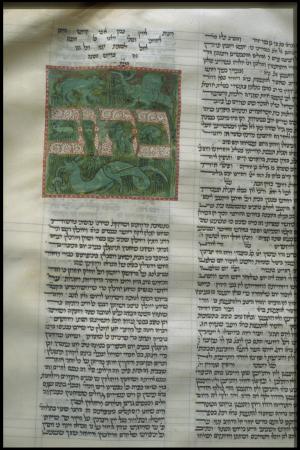 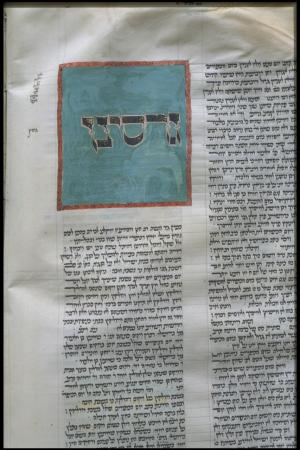 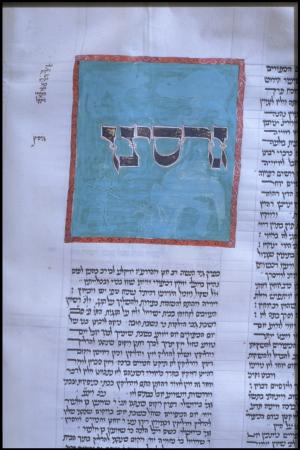 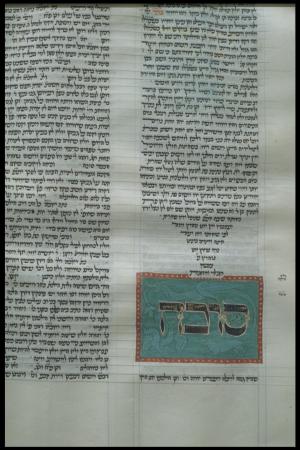 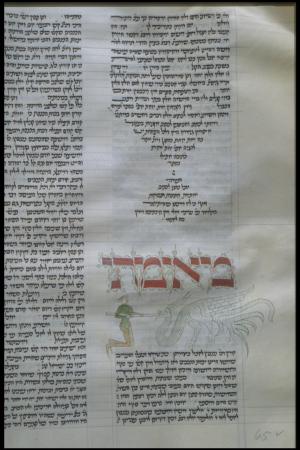 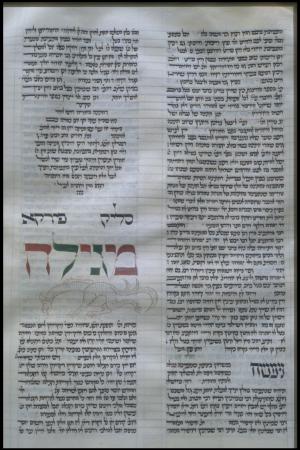 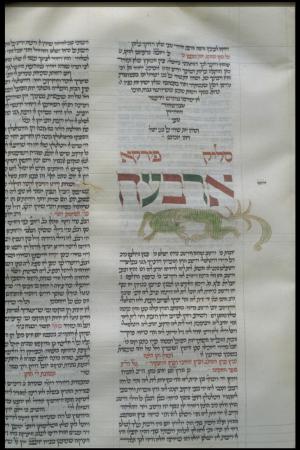 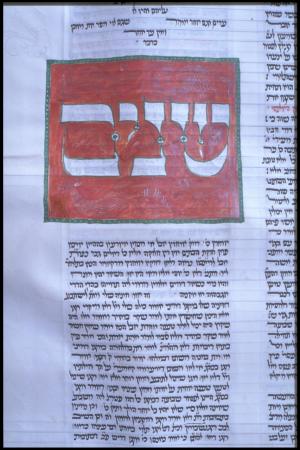 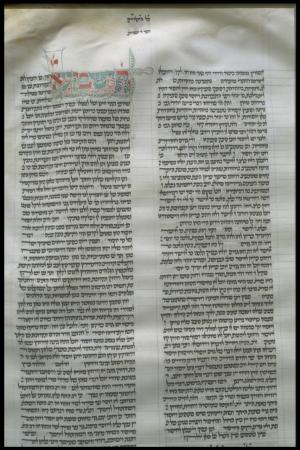 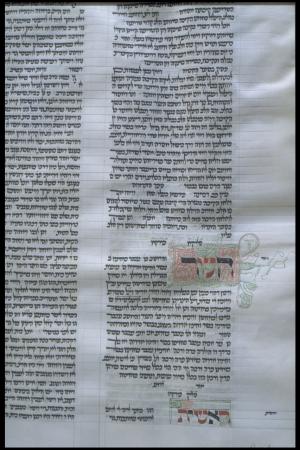 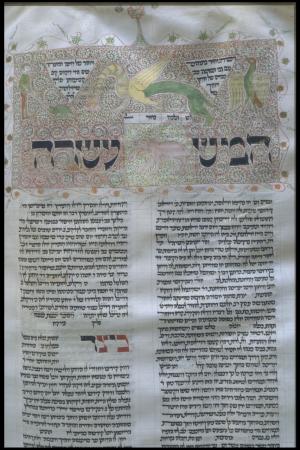 The text is written in two columns.

Pricking is discernible in all margins.

XXXI 8-2, (The first leaf of the quire (fol. 237) and the last leaf (fol. 242) are a bifolium; and so are fols. 240-241- bifolium; fols. 238 & 239 are widows. It seems that originally Scribe B copied that text on fol. 174, which opened a new quire. For unknown reasons, Scribe C replaced Scribe B and moved the quire already started by Scribe B, to the end of the manuscript and started to copy the same text on fol. 174 on another new quire. The sheet of the quire with the hand of Scribe B was folded to the other side. This refolding brought the first leaf (including the text of Scribe B) to be the last in the quire, thus fol. 242 which served as a pastedown.  The 2nd (fol. 238) and 3rd (fol. 239) leaves of this quire are single leaves and their counterpart were blank and therefore cut-off.

Vertical and some horizontal catchwords to the quires appear in the lower left-hand corner of the final versos of each quire. Catchwords for the first three leaves of each of Scribe C's quires (XXIII-XXXI) are written horizontally at the lower left-hand margin of the verso side of those leaves (e.g. quire XXIII, fols. 174v, 175v, 176v, quire XXVI, fols. 198v, 199v, 200v).

Scribes
Script
Number of Lines
Ruling
Pricking
Quires
Catchwords
Hebrew Numeration
Blank Leaves
Direction/Location
Façade (main)
Endivances
Location of Torah Ark
Location of Apse
Location of Niche
Location of Reader's Desk
Location of Platform
Temp: Architecture Axis
Arrangement of Seats
Location of Women's Section
Direction Prayer
Direction Toward Jerusalem
Coin
Coin Series
Coin Ruler
Coin Year
Denomination
Signature
Colophon
Fol. 241v: Scribal colophon of Scribe C: Written in semi-cursive Ashkenazi script in brown ink: Text: ביום שישי בשבת בי"ב ימים לחודש ואדר השיני שנת חמשת אלפים ומאה וחמשים ושנים/ לבריאת העולם השלמתי ספר מוה"ר מרדכי זצ"ל להנדיב ר' שמריה ב"ר משה. הקב"ה יזכיהו/להגות בו הוא וזרעו וזרע זרעו עד סוף כל הדורות דכתי' לא ימושו מפיך ומפי זרעך ומפי זרע/ זרעך אמר ה'. / שלום הסופר לא יוזק לא היום ולא לעולם עד שתעלה פרה בסולם, Translation: On Friday, 12th of Adar II, 5152 (March 9, 1392) I completed copying this Book of Mordecai for Shemarya b. Moshe. Shalom, the scribe, will not be harmed, not today nor forever, until a cow climbs a ladder.
Scribal Notes
Names of scribes: • Scribe B emphasized his name ”Barukh” (ברוך) many times in the text in three ways: by a foliate motif (e.g. fols. 14, 26, 30), rubricated in red (e.g. fols. 36v, 59, 128) and in acrostic (e.g. fols. 114 and 167v). • Scribe C emphasized his name on fol. 194, in the left column on top of the word: "shalom” (however he marked all other names and sources in the same manner as is evident on the same pages). On fol. 137- his name Shalom, appearing twice in full, is rubricated in red each time. Scribe A’s blessing: Fol. 1v: Scribe A’s blessing before starting to copy the manuscript inscribed in the upper margin in dark brown ink: "ע'מ'י' ע'ש'ו' ע'מ'י' ע'ש'ו'/ בטוב גדא אתחילדא ואסיים דא." Translation: With the help of God, with good luck I will start and finish this. . Instruction to the reader by Scribe B: Fols. 77 and 77v: Two notes by Scribe B instructing the reader to skip certain parts of the text which are not related to the text in this section (see also: CTN above): • The one on fol. 77: at the middle of the outer margin, in small round script, in triangular shaped text: בו." מכאן עד סוף פרק/ לולב וערבה תדלג/ כי הוא שייך/ לסוף מס'/ סוכה לכן/ אל יטע'/ כל/ הקורא Translation: Skip from here to the end of chapter Lulav and Aravah because it belongs to the end of tractate Sukkah and therefore the reader should not be mislead. • On fol. 77v: at the bottom of the outer margin, in small round script: עד כאן שייך לפרקא/ מסכת סוכה ואל/ תתמה עלי שכתב'/ אותו הנה ידוע/ ליהוי לכל הקורא/ בו כי טעות היה/ לפני וזאת הבנתי/ מעצמי ובראש/ העמוד תמצא/ כסדר Translation: [The text}until here belongs to chapter Sukkah and do not be surprised that I copied it here; it is known to all readers that it was a mistake which I realized myself . And at the beginning of the page one will find it in the correct order. Scribe B's inscriptions at the beginning or end of sections: such as on the outer margin of fol. 56: אחל/ הילכות/ יום/ הכיפורי'/ של אבי/ העזרי" Translation: I will start the laws of the Day of Atonement by Avi ha-Ezri (=R. Eliezer ben Joel Ha-Levi of Bonn; 1140-1224) called Ravayah. Fol. 58v inner margin, scribal inscription: "סליק/ הלכות/ יום/ הכיפו' / של/ אבי/ העזרי/ זצקל. Translation: I finished the laws of the Day of Atonement by Avi ha-Ezri, may the memory of a righteous one be a blessing. Scribe B marked his model books a few times in the outer margins: -Fol. 110v: written at the centre of the outer margin in small round script: בכאן התחלתי/ לכתוב מן הספר/ של ר' אברהם/ זלה"ה Translation: ”From here I started to copy from the book of the late R. Avraham.” -Fol. 72v, at the end of the left column: העתקתי מספר אבי"ה סימן תקיד Translation:”I copied from Avayah, Ch. 514.” Initial words in small round script are written in the outer margins next to the same large initial word of the main text by Scribes B & C: • Scribe B wrote the initial words in small round script next to large decorated initials (see fols. 56, 58v, 59, 97, 63, 65v, 84). • Scribe C wrote the initial words in small round script next to every initial word (e.g. fols. 174, 176, 178v, 179v, 181, 184v, 187v, 191, 192v, 193, 198v, 199, 201v, 208, 208v, 232).
Watermark
Hallmark
Group
Group
Group
Group
Group
Trade Mark
Binding

The decoration was rendered by one artist.

A.     Nine large initial word panels:  4 monochrome initial word panels opening three tractates (fols. 56, 59, 97) and a chapter (fol. 58v). The panels are in shades of light blue (fol. 58v, 59), green (fol. 56) and red (fol. 97) with black and white contours and decorated with dragons, hybrids and a hunting scene. Each panel occupies one column’s width. 5 penwork initial word panels opening 5 tractates, two of which are elaborate and occupy the two text column’s width decorated with dragons and hunting scenes (fols. 208v, 221v) while 3 others are smaller and extends to one column’s width only (fols. 180v, 191, 235v). These panels are filled with large red or green scrolls except fol. 235v which has a chequered background.

F.     Simple geometrical rosette in red and brown ink is at the upper margin on fol. 138.

This Sefer Mordecai is a later copy of an halakhic compendium by Mordecai ben Hillel Ha-Kohen (1240(?) - 1298), author and rabbinic authority in Germany, who died in Nuremberg a martyr’s death in the Rindfleisch massacres, together with his wife and five children. Mordecai’s fame rests on this Sefer Mordecai, always referred to as “The Mordecai.”  This gigantic compendium consists of elaborations on Talmudic problems in the style of the tosafot.

“The Mordecai” spread quickly and many manuscripts were produced with this text. The history of the spread of "the Mordecai" and the transmigrations of its many versions in manuscript and in print is one of the most complicated in all rabbinic literature. Because of the book’s tremendous scope, two main compilations of extracts, the “Austrian” and the “Rheinish”, were made from it within a few decades, mainly reflecting regional laws and customs, and differing greatly from one another. The Rheinish version includes the views of many French and English scholars, and the customs of the German communities. These customs had spread eastward as far as Poland, but were not accepted west of Germany. The Austrian version reflects the minhag of southeastern Europe including the customs of Austria, Hungry, Bohemia, Saxony, and Moravia, and mentions many Austrian scholars. According to research on some of the tractates of Sefer Mordecai (Bava Kamma, Rosh ha-Shana, Yom Kippur, Sukkah, Bezah, Ta’anit and Megillah) in various manuscripts, and amongst them, our manuscript, scholars came to the conclusion that our manuscript belongs to the Austrian version (Sefer Mordecai Ha-Shalem, Mif'al Torat Hokhmei Ashkenaz, Mahon Yerushalayim,(Teachings of the Torah Sages of Ashkenaz), a Project of the Jerusalem Institute. 1989, 1992, 1995, 1997).

Stylistically the initial word panels in our manuscript on fols. 208v and 221v should be compared with a similar panel of another halakhic text, the SeMaK, produced in Nuremburg in 1392 (London, British Library, Add. 18684, fol. 12). In both manuscripts the initial words are filled with animals and foliate motives, commonly appearing in Ashkenazi manuscripts (see for example: ÖNB, Cod. Hebr. 163, fol. 2v, cat. XXX), however in both manuscripts the letters set within a panel are filled with a unified background of repeated pattern (in the Vienna manuscript with scrolls while in the Nuremburg SeMaK with flowers). Similar panels, in motives but not is style,  with a unified background of large scrolls and repeated patterns can also be found in the Erna Michael Haggadah, Germany (Middle Rhine), ca. 1400 (Israel Museum, 180/58, fol. 35v). The decoration of the Erna Michael Haggadah (fols. 52v, 65v) could also be compared to the monochrome panels of theVienna manuscript on fols.  56, 58v and59. In both manuscripts dragons, hybrids and humans, depicted on a monochrome background, almost merge with the background.