The triptych is composed of three wooden vertical panels. The side panels are shorter and narrower than the central one and are joined to it from the top. An enthroned human figure is painted on a sky-blue background in the central panel. The picture is devided into four horizontal parts. The angular point of the upper blue, pentagon shaped, one is at the figure's chest. The angular point of the second green part is at the figure's loins. An eye appears in the upper right corner of the green part. The angular point of the third red part is at the figure's feet and has an eye depicted on its lower left side. The rest, most the lower part of the picture, is black. The top of the central part of the picture is joined by a small piece of white canvas on which is painted a golden crown within a grey frame. On both sides of the crown are two stretched yellow strings joined by tacks to the figure's feet. Two yellow lines are drawn similarily reaching the figure's hands. A red line is drawn on the figure's right and is drawn until her left hand. A blue line is drawn on the figure's right connected to her right hand. The figure's hair is made of yellow strings. A little round yellow framed mirror is joined to her face and hence conceals it. Only her lips and teeth are reaveled below the mirror. From behind her shoulders two long arms darker than the figure's body are depicted, framing it and giving the impression that the figure is a kind of marionette. The left hand is made of cardboard and joined to the canvas as well as the figure's shoulders. From the golden circle on the figure's heart a black line is drawn to its loins which are similarly concealed by another golden circle on which the tenth letter of the Hebrew alphabeth, an initial of god's name, is written: י . Black lines drawn from the figure's shoulders to a golden circle located between the figures left feminine breast and its right masculine breast. Black lines are drawn over the figure's body in the shape of the Tree of Life. From its loins emerges two other legs appearing to belong to the darker figure whose hands exist alongside the central figure. The two feet of the bright central figure are joined together wheras the feet of the darker figure are spread out. 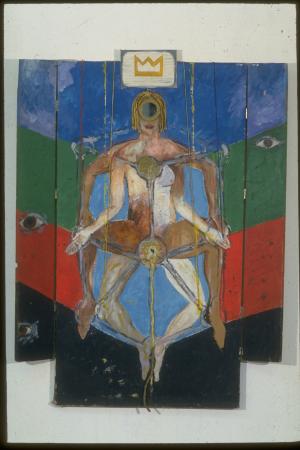