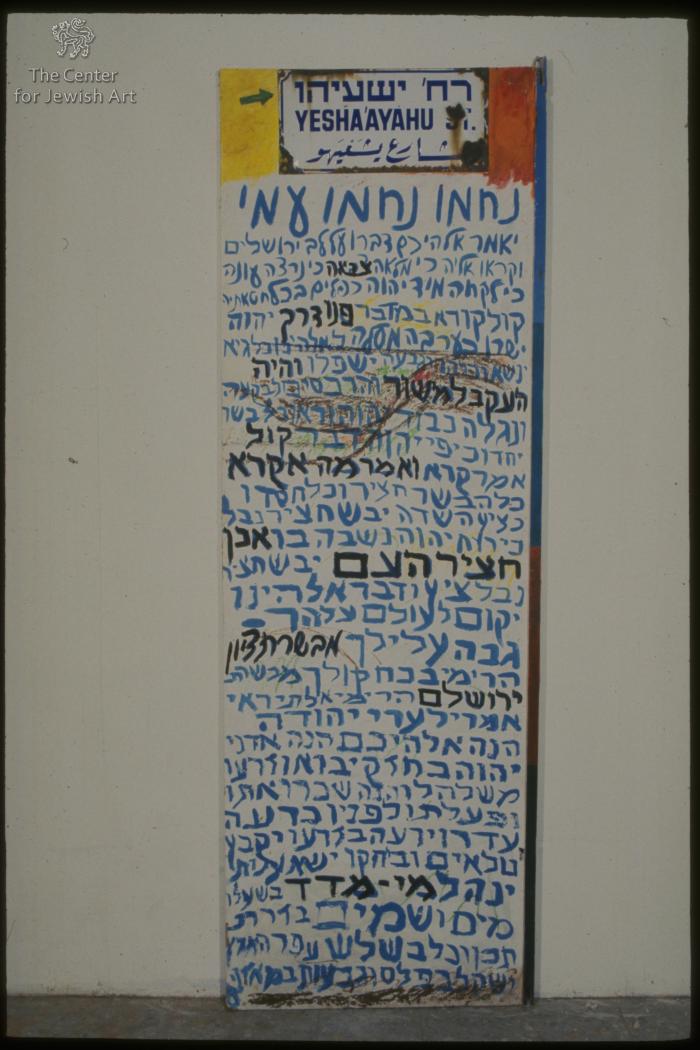 A street sign is attached to the top of the picture. The sign is written in blue Hebrew, English, and Arabic block letters on a white background: רח' ישעיהו "Yeshayahu Street." A green arrow which points to the sign is mounted on a yellow background to the left of the sign. An orange wooden rectangle is mounted to the right of the sign. Verses from Isiah's prophecy (Isa 40: 1-13) are written on the long rectagular vertical panel below the sign in Hebrew letters. Most of the words are painted in light blue block letters of various sizes. Some letters are written in two layers: black superimposed over light blue in order to highlight the letters. The text is written in thirty-one lines, in a horror-vacui manner. The margin at the bottom of the panel is painted with brown oil crayon. The first line of the text (Isai. 40:1), is written in larger script than the rest of the text, written in light blue cursive letters: נחמו נחמו עמי/"Comfort ye, comfort ye my people." In the third line, one word is highlighted in black over the light blue cursive letters: צבאה/"Her warfare." In the fourth line one word, written in block letters and in script is highlighted in the same manner: פנו/"Prepare ye." The following word, written in cursive, is also highlighted in black: דרך/"The way." Lines five to seven are vaulted to illustrate the text (Isa. 40:3-5) and lines six to nine are written on the background of a hill on the right and a valley on the left. One word in the seventh line and the following two words in the eighth line (Isa. 40:4) are highlighted in black: והיה העקב למישור/"And the crooked shall be made straight." One word in the tenth line and two words in the eleventh line (Isa. 40:6) are written in the same manner: קול ואמר מה אקרא/"The voice... and he said what shall I cry." The last word of the fourteenth line and the following two words of the fifteenth line (Isa. 40:7) are highlighted in black: אכן חציר העם/"Surely the people is grass." In the eighteenth line, the last two words (Isa. 40:9) are written against the background of a sketchy drawing of a mountain in brown: "O Zion that bringest good tidings"/מבשרת ציון. The first word of the twentieth line (Isa. 40:9) is written against a background of the sea and sky: ירושלם/Jerusalem. In the twenty-eighth line (Isa. 40:12) two words are highlighted: מי-מדד/"Who hath measured." 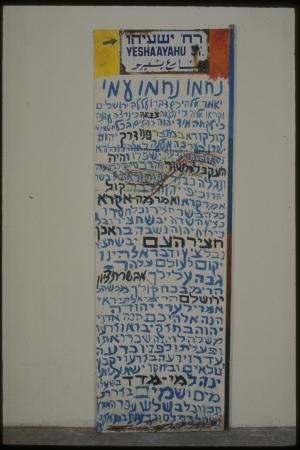