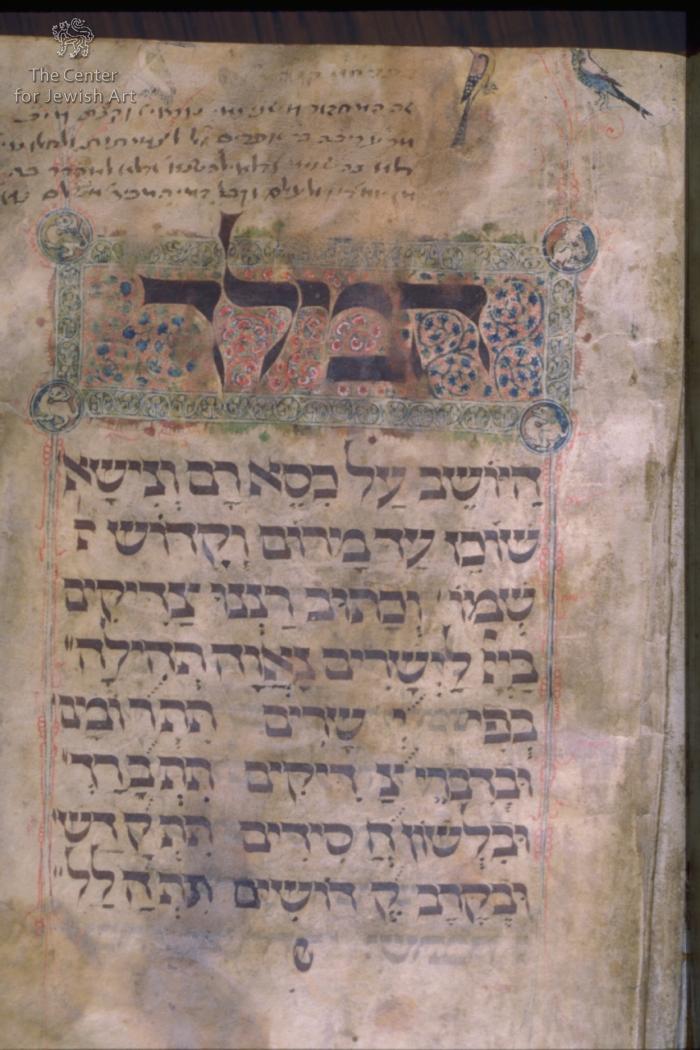 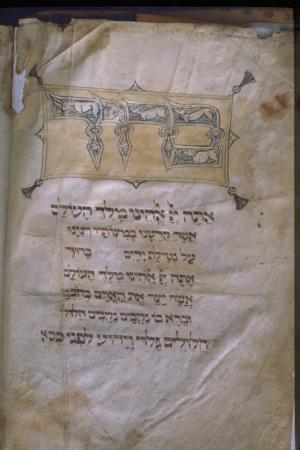 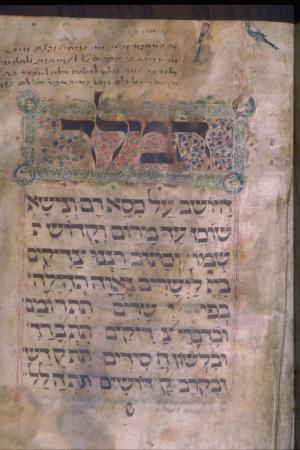 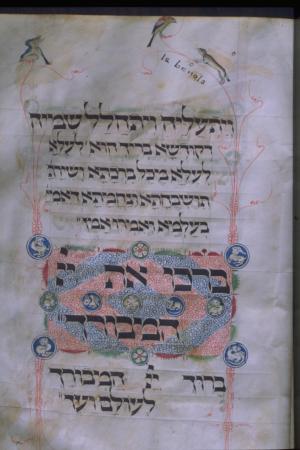 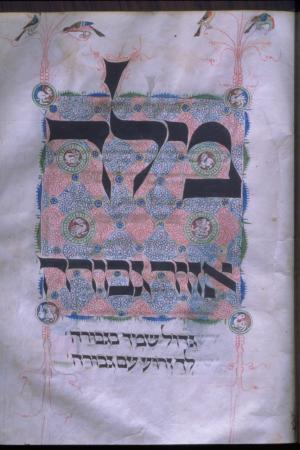 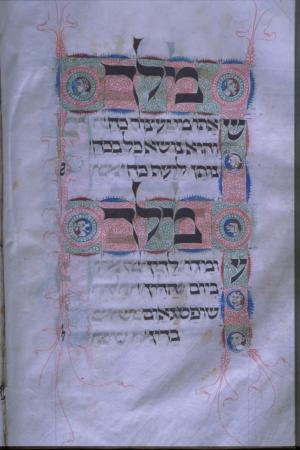 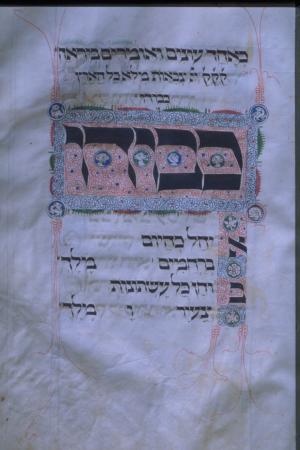 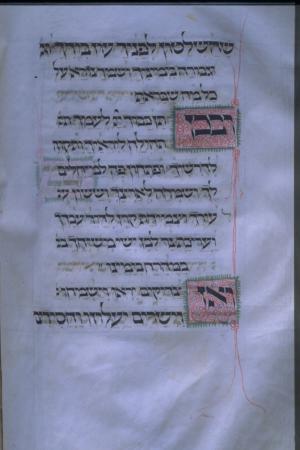 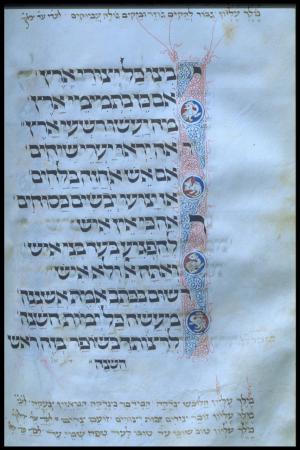 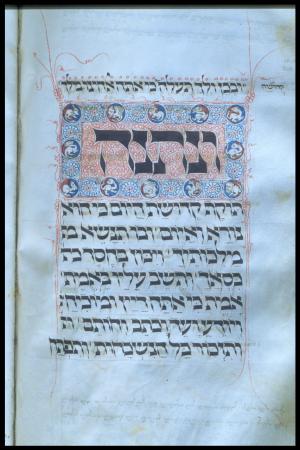 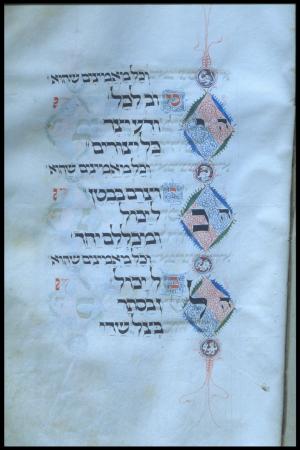 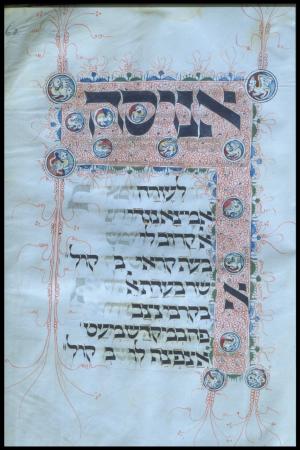 Material:  Vellum. I + 379 (fols. 1-40, 101-102 are later additions)+ I leaves. The original parchment is very thin and it is hard to distinguish between the flesh and hair sides. The parchment of the later additions is thicker and the differences between the two sides are clearly discernible.

Pricking by quire on the recto is discernible in the upper, lower and inner margins, corresponding to the ruled lines (e.g. fols. 296-305) for scribes A's quires. The 2nd, the 7th and 12th lines are double pricked with two pricks side by side to indicate the full-width lines.

At the end of the manuscript, one quire and text is missing.

Scribe A: 26 vertical or horizontal catchwords for the quires, written in the lower left-hand corners of the last versos. The presence of the catchword on the last verso of the manuscript indicates that at least one quire is missing.

The decoration was made in two stages after the writing of the text. The first stage is the main one, and includes the decoration of the quires written by Scribe A (fols. 41-379). The second stage consists of only one miniature (fol. 2v), decorating the first page copied by Scribe B, and was clearly made by a different artist in a different style. On fol. 35v space was left for another initial word (ויושע) but was never completed: a different hand later added this missing word.

The Vienna New Year Mahzor is the first part of a two volume mahzor of the Western Ashkenazi rite. The second part, which includes Day of Atonement prayers, is now housed in Jerusalem and is known as the Moskowitz Rhein Mahzor (Jerusalem, JNUL, Heb. 8° 5214, in 3 vols. see: documentation in Index of Jewish Art, Ms.1995.43). Both parts are identical in size, script and decoration program and it seems that they were originally divided into at least two volumes, since they together comprise about 1020 folios. Both parts do not include a colophon, but the original scribe (Scribe A) emphasized the name Moshe(משה)  in both of them (Vienna, fol. 222v, the name "Moshe" emphasized with red and black dots above the name; Jerusalem, vol. I, fol. 72, a dotted scroll extending from the letter "mem" מ'). Schwartz thinks (no. 91) this is the patron’s name (although he does not explain his assumption), however it may well be the scribe’s name since in the majority of manuscripts the scribe’s name is emphasized (M. Beit-Arié, "How Scribes Disclosed their Names by Means of their Copied Text", in Me'ah She'arim: Studies in Medieval Jewish Spiritual Life in Memory of Isadore Twersky. ed. Ezra Fleischer, Gerald Blidstein, Carmi Horowitz, Bernard Septimus, The Hebrew University Magnes Press, Jerusalem 2001, p. 119. [in Hebrew]).

Sed-Rajna (Sed-Rajna, G., "Filigree Ornaments," 1986/87) claims that the scribe of this mahzor might be the same as of the Cambridge Hagiographa, signed by the scribe Hayyim in 1347 (England, Cambridge, University Library, Ms Ee 5.9) and that of the Vienna SeMaG  Strasbourg, 1344, (Austria, Vienna, ÖBN, Cod. Hebr. 34/I-II see Cat. …..). However, paleographic examination indicates that the script of these three manuscripts is not rendered by the same hand; we can only concur with Sed-Rajna's assumption that this manuscript might have been produced in the same workshop as the Vienna SeMaG and the Cambridge Hagiographa,  but was copied by a different scribe, that we believe to be Moshe.

Besides the original scribe, Moshe (Scribe A), another scribe (Scribe B) at the end of the 14th century or at the first half of the 15th century, copied the first five quires of the manuscript, which includes the Preliminary Morning Prayers (fols. 2v-40v) and part of the Reading of the Torah for the first day (fol. 101-102). The same Scribe B copied many entire quires which also complete missing text in the second part of the mahzor, located in Jerusalem. Even though this second scribe kept some of the codicological features of Scribe A (ruling by plummet on both sides, same number of lines and same text space), his quires count 8 leaves, he used a different, thicker parchment than Scribe A, and his pricking is not discernable at all (in the Jerusalem mahzor it is discernable in very few leaves, see: vol. II fols. 260, 271, 328). Moreover, quires by Scribe B present no decoration at all, besides one painted initial word panel (see below). Scribe B did not interfere with text copied by Scribe A.

Uncompleted or missing piyyutim on fols. 45, 78v-79, 134v-135, 144v were completed or copied  later by another hand (Hand 1) in smaller square and in semi-cursive (of "Gothic" type) script in the outer margins. It is interesting to note that the added texts are all in the margins of a central bifolium of  ten leaf quires. We assume that the missing text originally occupied 2 leaves in each quire, indicating that those quires originally included 12 leaves each, as do most of the quires of scribe A in this manuscript.  It seems that those bifolia were lost not long after the copying of the main text. We assume that those additions were done prior to the decoration of the whole manuscript because the flourishes which extend into the margins cover some letters of the added text (see fols. 78v and 134v).

The main decoration of the manuscipt is concentrated mainly in the first half of the original part of the manuscript, the part of prayer for the first day of New Year. It was executed in one stage apparently by one main artist. While the later stage of the manuscript which was copied by Scribe B was not decorated, in a later period one initial word panel was added on fol. 2v.

The decoration of the original part is mainly for initial word panels filled with filigree scrolls, interspersed with medallions encircling various motives such as human and animals' heads, hybrids, grotesques, floral and foliate motifs executed in spared-ground technique. Flourishes with tendrils extend from the panels, often framing the text and reaching the upper and lower margins, where flying and perched birds are sometimes located. It is interesting to note that the Jerusalempart of the mahzor is more elaborate in its decoration program, and it includes a larger and more sophisticated range of zoomorphic, anthropomorphic and vegetal motifs. Moreover it includes a splendid full-page Gothic façade with praying angels illustrating the prayer  (ברוך ..הפותח שערי רחמים)"Blessed is Thou…that opens the Gates of Mercy" recited in the Morning Service of the Day of Atonement (see: vol. I, fol. 83).

The filigree scrolls of the opening panel of the original manuscript (fol. 41) is somewhat of a schematized design and probably repainted later as a result of damage caused to the page. In fact, the style of this panel seems not to be the same as the other panels; the colours, composition and execution of the work are different. Similarly, the addition of the missing words "Melekh Elyon" in the outer margins of fol. 135, written by Hand 1, are decorated with red filigree scrolls, in a different tonality and a different style than that found in the other panels.

Stylistic similarity with our manuscript is to be found in the two manuscripts mentioned above, The Vienna SeMaG (Cat…..) and the Cambridge Hagiographa. As Sed-Rajna pointed out (Sed-Rajna, G., "Filigree Ornaments", 1986/87), these three manuscripts are related to the Latin Upper Rhine School of illumination of the first half of the 14th century. Ellen J. Beer, who identified this Latin School, proves that this style began at the end of the 13th century in north of France, and spread to the Upper Rhine, in the southwest of Germany until its decline at the first half of the 14th century (Beer, E. J., Öberrheinischen Buchmalerei, 1959). Out of the eight groups of this School that Beer identified, Sed- Rajna relates the three Hebrew manuscripts to the groups produced in Basel after 1330 (group 5) and Freiburg after 1340 (group 6). This assumption can be supported by the divorce formula in the The Vienna SeMaG (fol. 146v) with 1344 as date and Strasbourg as place and by the colophon in the Cambridge Hagiographa (fol. 555v) that mentions the year 1347 as the date of production of the manuscript by the scribe Hayyim. Thus we assume that the Vienna-Jerusalem mahzor was produced in theUpper Rhine between 1344 to 1347.

Another manuscript to be attributed to theUpperRhineSchoolis Cod. Hebr. 71 (Cat…..), whose style of decoration is less accurate than the other manuscripts of the School, and was probably executed under the influence of another manuscript, held today in a Private Collection in France.

The later initial word panel decorating the first folio copied by Scribe B (Vienna, fol. 2v) is dated to the 15th century. The initial word is filled with zoomorphic, anthropomorphic and foliate motifs in spared ground technique typical of illuminated Ashkenazi manuscripts since around 1300. These kind of letters can also be found in many manuscripts written and illuminated by Joel ben Simeon, the Jewish scribe and artist who worked in Ashkenaz as well as in north-central Italy in the second half of the 15th century. For instance, the hooded human face in the letter "vav" (ו') in our manuscript should be compared to human faces in some initial letters of works of Joel ben Simeon such as in the First Nuremberg Haggadah, produced in Germany shortly before 1449 (Israel Museum,Jerusalem, previously in Jerusalem, Schocken Library, ms. 24086, fols. 8, 11v, 24), as well as in The First New York Joel ben Simeon Haggadah, produced in Germany, middle of the 15th century (New York, The Jewish Theological Seminary, ms. 4481, fol. 1v) and in The Second New York Joel ben Simeon Haggadah, Italy, 1454 (New York, The Jewish Theological Seminary, ms. 8279, fol. 54v). In addition, the tassels that decorate each corner of the panel in our manuscript should be compared with the panel on fol. 21 in the First Nuremberg Haggadah.

The manuscript reached Italyas indicated by the censor Domenico Gerosolomitano's erasures and signature (fol. 379v). Gerosolomitano was censor in Italyin the end of the 16th century and the first twenty years of the 17th century. It stayed in Italy for several centuries as indicated by an 18th-19th Italian inscription on the upper margin of fol. 43 below the hunting scene (“la benola,” meaning weasel) as well as by the Italian inscription on the front flyleaf.