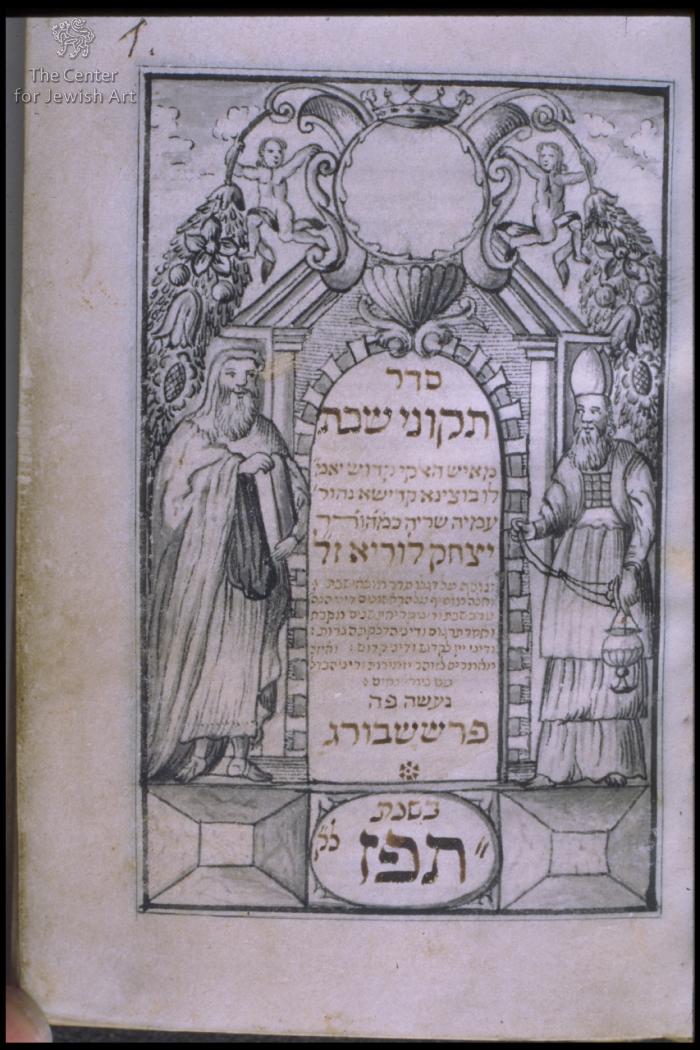 As indicated in the colophon, Seder Tikkunei Shabbat was written in (5)487 (=1726/7) in Pressburg, a place near Vienna, by an unknown scribe.

Seder Tikkunei Shabbat is a kabalistic treatise, consisting of mystic poems for the Sabbath and explanations of the Sabbath ceremonies. It has been attributed to Isaac ben Solomon Ashkenazi Luria (Ha-Ari, born Jerusalem 1534, died Safed 1572). This book was popular among Ashkenazi and Sephardi Jews. It was printed in many editions, with the first printed edition in 1651 in Prague. The printed and handwritten compilations vary from one copy to the other (see Lieberman, Sefer Tikkunei Shabbat, p. 402). As Fishof (Yakob Sofer mi-Berlin, p. 85) pointed out, the earlier printed editions of Tikkunei Shabbat were not illustrated while the handwritten books, which are modeled after the printed editions, have illuminated title-page and text illustrations.

The decoration program of our manuscript and the style of the illustrations are pointing to the Jewish Bohemian-Moravian School of book illuminations in the eighteen century that formed a center inVienna.

Two of the prominent scribe-artists who were active in Viennafor more than half of the 18th century are Meshulam Simmel from Polna (Bohemia), and Aaron Wolf Herlingen from Gewitsch (Moravia). It seems that some of their patrons were wealthy Jews of high position in the Habsburg court of Vienna. See for example, Simmel's Haggadah of 1719 which was commissioned by Isaac Oppenheim, a Court-Jew in Vienna (Jerusalem, Jewish National and University Library, Ms. Heb. 8o 5573; Schubert, Jüdische Buchkunst, p. 87 and fig. 48), and his two dedicatory pages for Charles the VI in 1732 and 1733 (Vienna, Austrian National Library, Cod. Hebr. 223 and 224; see: Cats.-Nr. ##),

Herlingen was even closer to the royal court. In several manuscripts (See for example,Vienna, Austrian National Library, S.n. 1594) he signed his colophons with the words "Scribe of the Royal Library of Vienna".

However, Parisand Jerusalemmanuscripts have other illustrations that are not included in our Tikkunei Shabbat, e.g. an illustrative panel of Havdalah. The Jerusalem book has the richest decoration program by Herlingen, and includes other illustrative panels which are not presented in Vienna and Paris: a standing man reciting Shalom Alechem ("Peace be with you"), Solomon’s Judgment, Solomon’s bed guarded by soldiers, and the Temptation.

Like all eighteen century scribes, the models of the title-pages are pointing to various printed books, like the Venetian Haggadah from 1609 (Schubert, Jüdische Buchkunst, fig. 35) and the Amsterdam Haggadah from 1695/1712, although some motifs, as for example, the two putti on garlands in our medallion, originated from the Mantua Haggadah (1560) or a similar source with the strong influence of the Italian Renaissance.

The style of decoration in our manuscript, with the richly water coloured pen-drawings, the strongly stylized background architectures, the soft landscapes, mostly ending in flat mountains, the clouds formations mostly in white and the partly very schematic faces of the acting figures remind strongly of the oeuvre of Aaron Wolf Herlingen. Such as that in the Sefer Brit Milah by Herlingen of 1728 (Prague, The Jewish Museum (Zidovkse Muzeum), Ms 243), especially in the upper left medallion of the title page where the landscape in the scene of the ascension of Elijah is very similar (See: Schubert, Jüdische Buchkunst, fig. 93).

However, stylistic comparison with Herilngen's signed manuscripts from around the date of our manuscript (such as Seder Tikkunei Shabbat, Vienna, 1724 (NY, JTS, ms. 8232), shows that in his illustrations the faces features of the figures are more expressive than in our illustrations, where the faces and drapery of the figures are all flat and so is the entire meager compositions (compare for instance the figures of Aaron and Moses in the title pages of our manuscript, fol. 1, and Herlingen's JTS, fol. 1).

We assume that these differences of style indicating that the illustrations of our manuscript were produced by one of the followers or assistant of Herlingen in Pressburg.

As we already know Herlingen was active in Pressburg (Schubert, Jüdische Buchkunst, p. 87). His name is found in the census of the Jews of Pressburg from 1736, which mentions also that Aaron from Gewitsch, a clerk in the Royal Library in Vienna, has one woman; one assistant and one maid (see Schrijver, Perek Shirah, pp. 23-24). The reference to the assistant lead some scholars (see Naményi, La Miniature juive, p. 62) to the conclusion that the differences in style in his works during his 28 years of production (1724-1752) is a result of the other hand of the assistant who helped him in his work.

Also the style of the script is close to the oeuvre of Herlingen (Such as in his Seder Tikkunei Shabbat, Vienna, 1724, mentioned above). Schrijver (ibid, pp. 23-24) pointed out the typical line-filler signs used by Herlingen, e.g. a small Yud or the S-form, and the different ways of writing the name of God, mostly as a capital "L" with two letters of yod (a sort of ligature). These peculiarities are found also in our manuscript (see fols. 4, 11). But some of the letters of our scribe (e.g. ayin, pei and alef) which are different in form from that of Herlingen, may suggest that Herlingen's follower also copied the text in our manuscript.

In August 18th 1855, the manuscript was presented to Franz Joseph I of Austria (18 August 1830 – 21 November 1916) in honor of his birthday, by Moses Müller, a scribe who signed his name on the leather box of the book in gold tooling. This scribe had in his possession also two ketubbot (Cod. Hebr. 135 and 136) and a SeMaG (Cod. Hebr. 34/I,II, known as the Vienna Semag, see (Cat.-Nr. ##)), all now in the Austrian National Library. In this library there are also two manuscripts with praises to this Emperor Franz Joseph I – Cod. Hebr. 216 and 217 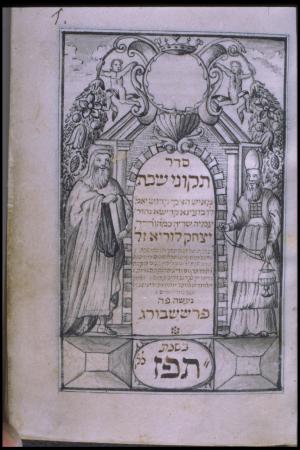 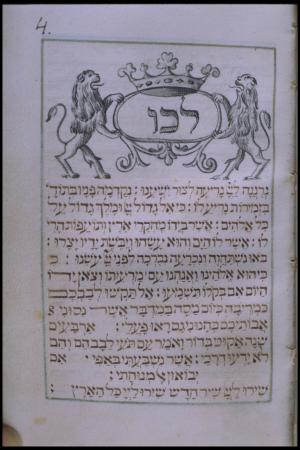 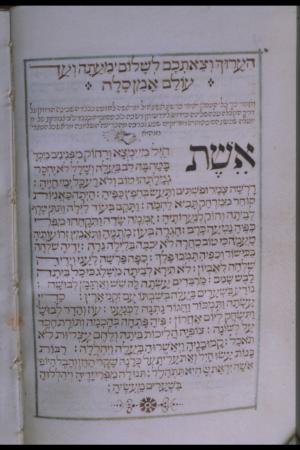 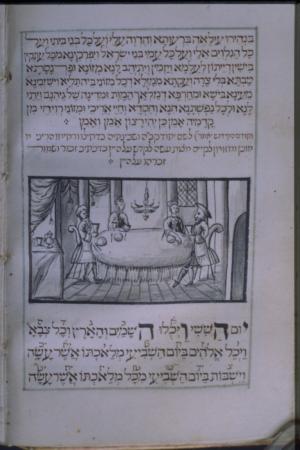 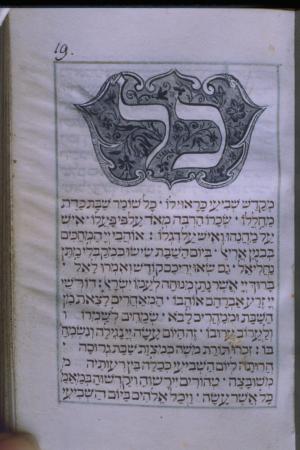 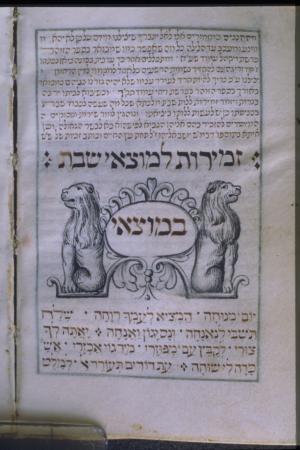 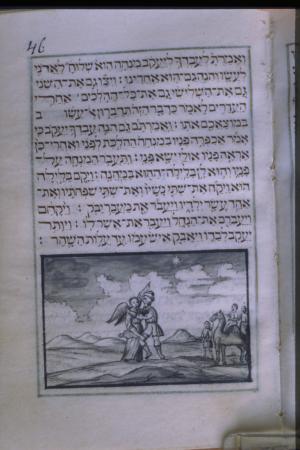 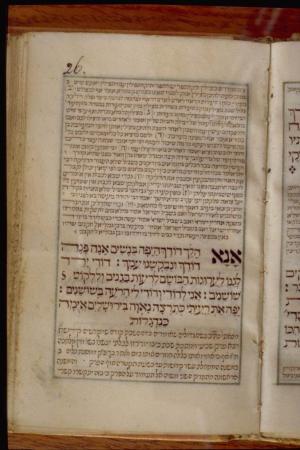 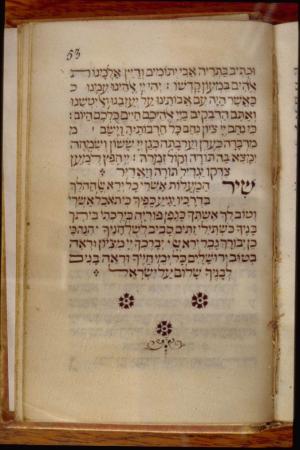 Pricking is discernible in the outer and inner margins within the frame (e.g. fols. 15, 18v). Double pricking is noticeable in some pages (e.g. fol. 2v) probably for the written commentary, although no additional ruling is found.

15 quires of 4 leaves each except for XIII2 (no text is missing).

One catchword for quire VI (fol. 24v) appears within the text panel in the lower left-hand corner.

Binding: Red coloured parchment on cardboards. Gold tooled with a foliate frame containing an elaborate central piece and four corners of foliate motif. The spine is divided by five cords into sections; each of which is decorated by gold tooled foliate motif. The pastedowns in the inner front and back covers are purple and gold marble paper. Gilt edges.

The manuscript is kept in a red leather box, with two gold tooled dedicatory inscriptions in German and in Hebrew, placed one above the other on one side of the box. Each inscription is framed by gold tooled panel decorated at the corners by a foliate motif.

"To his imperial royal apostolic mayesty Franz Josef I. in deepest awe to his joyful birthday on August 18th, 1855, given by his faith fullest servant Moses Müller, Hebrew calligraphy."

The decoration made by one artist executed in pen and ink gray water-colours (grisaille) and gold powder.