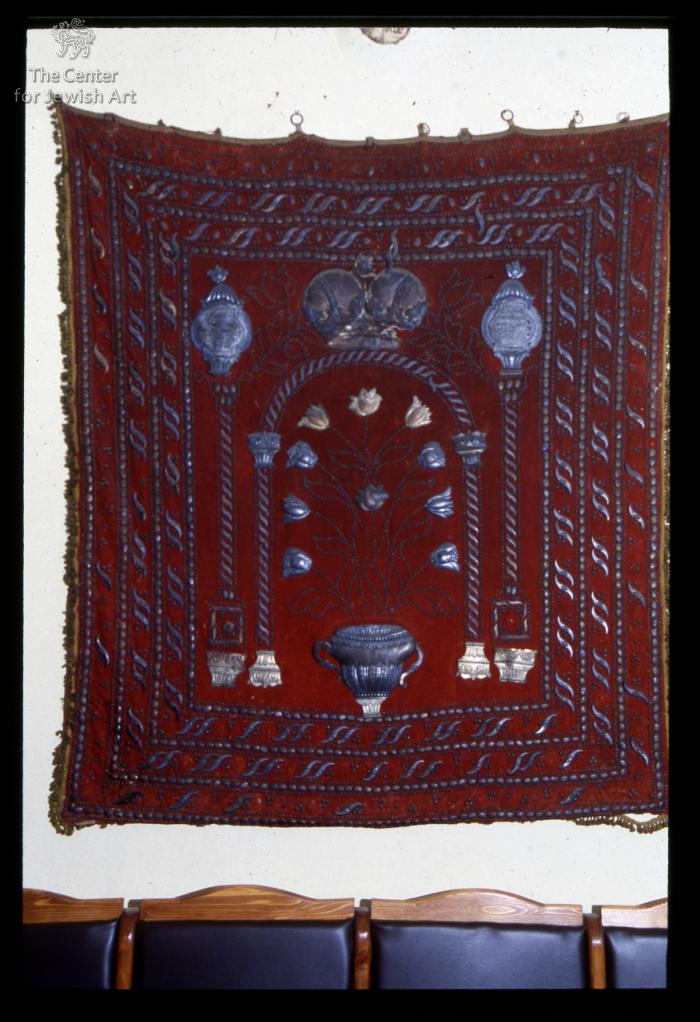 The rectangular parokhet consists of a single main cloth. It is decorated in its centre with a sacred façade, comprising an arch supported by two columns and flanked by two additional freestanding columns. The arch encloses a vase with tulips and is surmounted by a crown in the shape of the crown of the Austrian Empire, flanked by two tulips. Each freestanding column is surmounted by a cartouche, inscribed with a Hebrew dedicatory inscription written in square letters, read from right to left:

"This veil of the covering (parokhet hamasakh; Ex. 35:12) is dedicated to the Lord, completed and accomplished in the spring month (of Nisan; Deut. 16:1), the year 'The Lord is thy keeper' (Ps. 121:5; March - April 1800), through the good offices of the Great Rabbi, the exalted man of substance, the honourable, our teacher, the Rabbi, Rabbi Raphael Abraham Ashkenazi, may the Lord protect him, the manager of synagogue affairs (gabbai) of the holy congregation of Vidin, may the Sublime establish it, Amen." (See: Remarks: no. 1)

Additional tulips surmount the crown and cartouches.
The façade is framed by three concentric bands bordered by dotted strips. Each band is decorated with double s-scrolls intertwined with dotted flowers. Similar s-scrolls form the arch and the columns.
Hanging rings are attached to the upper rim of the parokhet, while a band of fringes surrounds it.

1. The parokhet was made in Vidin, a fortified borderland city situated on the south bank of the Danube in northwestern Bulgaria. It incorporates several visual influences, which are also apparent in other utensils originating in this cultural crossroads of east and west. The eastern influence is apparent in the metal plaques characteristic of textiles originating in theOttoman Empire and especially in the Balkans (figs. 1-2), as well as in the tulip motif (part of the four-flower motif), which was one of the Sultan's emblems. The western influence is apparent in the shape of the crown of the Austrian Empire.

Donors in their dedicatory inscriptions customarily choose certain verses to designate the date. Usually the choice is not arbitrary, and it serves to commemorate an event or a story to which the donor ascribes importance. The verse inscribed in the above parokhet is not exceptional. The citation from Psalms: "The Lord is the Keeper" (Ps. 121:5), can be interpreted as a simple plea to God to safeguard the family and the community or as a thanksgiving prayer. However, it is possible that Abraham Ashkenazi purposely chose the verse for a special personal reason, and to refer to an event which occurred in the year 1800. This personal meaning, is possibly disclosed in the preface of two halakhic books Ashkenazi helped to publish prior the dedication of the parokhet. In the acknowledgments of the book Kemah solet, published in 1798 by his brother-in-law, Rabbi Yehudah son of Moses Eli, he is mentioned as Abraham Ashkenazi. However, in Kokhava di-Shavit, written by Rabbi Elijah son of Abraham Ventura, who stood at the head of Vidin’s kollel, and published a year later (1799), he is referred to as Raphael Abraham Ashkenazi.

The additional name Raphael is also mentioned on the parokhet. According to the historian Salomon Rossanis, Raphael (healed by the Lord) was added to Ashkenazi's name after he was cured from a severe illness. This story gets further validation from the exaltation in Kokhava di-Shavit: “Whole in his body, whole in his wealth and justice of judgment,” which alludes to the common Jewish interpretation of Genesis 33:18. As Jacob came to the city of Shechem 'whole in his body' after he was cured from his limping, and 'whole in his wealth' despite giving presents to Esau - so Ashkenazi recovered from his sickness and benefited spiritually from his kind generosity. It is possible that Ashkenazi dedicated the parokhet to thank the Lord for his recent recuperation.

Moreover, it is possible that Ashkenazi also wanted to refer to the distress of the Jewish community in Vidin, the community he served. In summer 1799, a few months before he dedicated the parokhet, Ashkenazi was responsible for the renovation of the only standing synagogue in Vidin. The dedicatory plaque of this synagogue was inadvertently The Emergence of the Local Jewish Community in the Muslim World Qayrawan was revealed. As in the parokhet and the later publication, Ashkenazi is already named in the dedication as Raphael. He is also titled the “middleman”, probably due to his high position in mediating a loan from the local governor to renovate the synagogue. The renovation of 1799 was defined on the plaque as "a repairing of a breach", which, along with the verse "The Lord is thy keeper" on the parokhet, may refer to a series of terrible events in Vidin and its surroundings, in consequence of which the community yearned for the Lord’s miraculous Divine intervention.

Vidin's geo-strategic location had military and economic importance that attracted the Ottomans, Wallachi and Austrians, who tried to invade and govern it. The local Jewish community was established by Greco-Romaniot Jews (possibly from the 2nd century; documents of the 11th and 12th c.) joined by Hungarian (1360;1526), as well as Bavarian-Ashkenazi (1470), Sephardi (after 1492) and Italian Jews (1685), who were expelled from their countries and founded new congregations in the city. Due to financial limitations after the Wallachi invasion of 1596 and ever since, all the congregations prayed in the only functioning synagogue – the Sephardi Holy Congregation. The renovation of the synagogue by Ashkenazi was strongly connected to historical events that occurred in the city at the time. It is possible that the synagogue was harmed by the Austrian bombardments during the Austro-Turkish war of 1787-1792. It is also plausible that it is related to the evil deeds ofVidin's governor, arch-bandit Osman Pasvanoglu (1794-1807).

Pasvanoglu headed a small militia army of brigands, mercenaries and Janissary soldiers, who openly opposed the "new order" reforms of the central authority in Istanbul, and raided and devastated large areas in Bulgaria, Serbia and Wallachia. Seizing power by local governors was a widespread phenomenon characteristic to the disintegration of the Ottoman Empire during the 18th century, especially in the peripheral regions, of which Bulgaria was part. Pasvanoglu treated the Jews well, as is reflected by a local tale recounting that he had a Jewish minister of finance and a Jewish doctor who tried to save his life after he was stabbed by a poisoned sword sent by the Sultan. Despite his long struggle with Istanbul had life-threatening consequences. After a failed attempt to re-conquer Vidin and defeat Pasvanoglu in the year 1796, the Sultan made a second attempt in 1798. His army forced a firm blockade on the city from the Danube, during which a few cannon-shells may have harmed the synagogue, which consequently needed repairs. The blockade was lifted in October 1798 due to the need to divert forces to Egypt invaded by Napoleon, and the Sultan reluctantly decided to formally acknowledge the rule of Pasvanoglu. However, contrary to the Sultan's expectations, the honourable title of a ´Pasha with three horses’ tails´ did not curtail Pasvanoglu’s raids, nor encouraged him to pacify smaller bandits – he just manipulated the situation to his convenience, at times a loyal ally– at times, a robber bandit.

In the year "The Lord is thy keeper," that is 1800, the instability in the region reached new heights. The Jews hoped for salvation after their lives were threatened by the bitter power struggles between the militias of Pasvanoglu and two other local rulers, who fought over power in northBulgaria.

Thus, the parokhet serves as a cultural-historical text, which integrates the story of the personal salvation of Abraham Ashkenazi and the communal hope for deliverance, into one meaningful narrative. 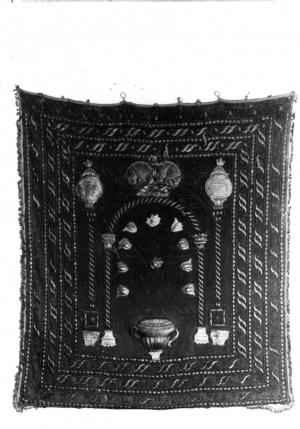 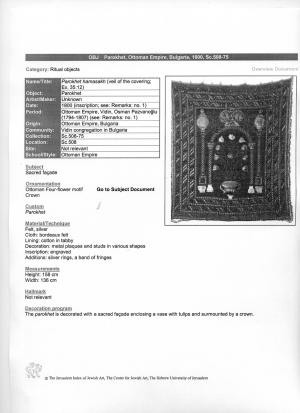 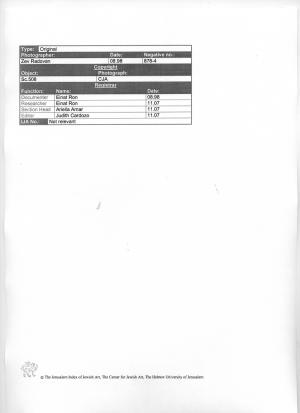 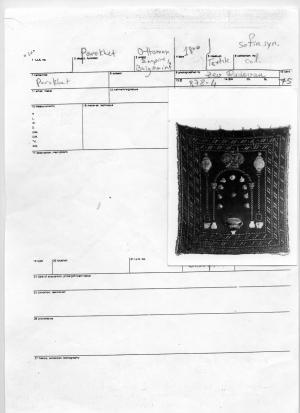 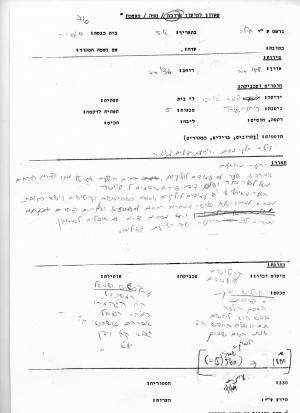 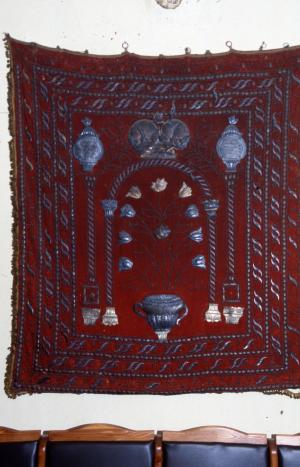 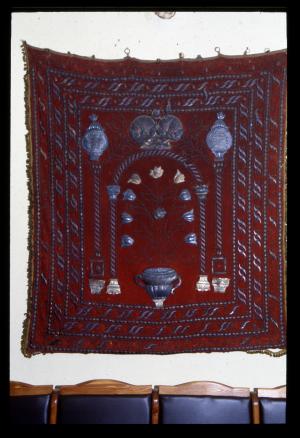 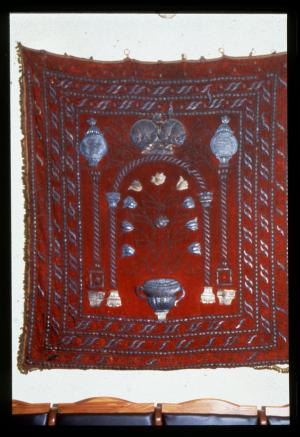