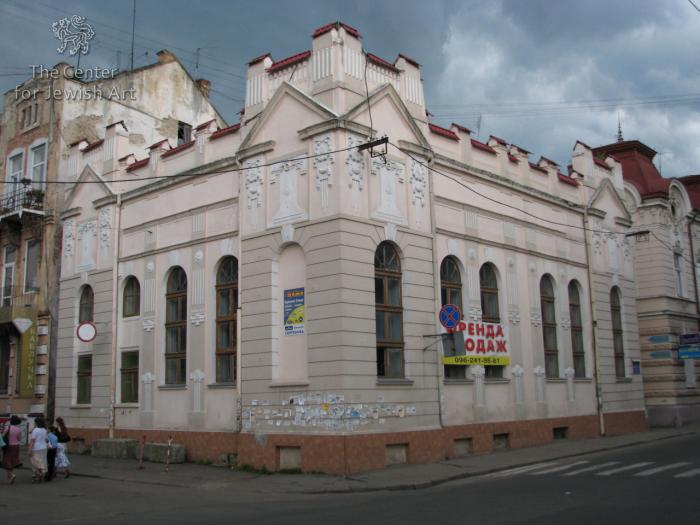 Despite extensive alteration --the building has been essentially gutted-- the beauty and sophistication of design which the New Synagogue of Drohobycz built in 1909 once presented to the populace remains evident.

Closely hewing to its slightly irregular lot, the building itself is a slightly irregular parallelogram, the non-right angles disguised by the corner treatment. Both street facades present a stylized and intelligent facades.  The W facade, the smaller of the two, is framed by two small towers, rising only slightly above the cornice line, stylistically related to the Viennese Secession, though, as the architect is currently unknown, the exact relationship remains elusive.  The towers, strongly and smoothly rusticated on the lower portions, are capped by strongly styled pediments flanked by rich plaster decoration.  The entire cornice of the building --masking the true roofline-- is punctuated by small towerettes which reiterate the rhythm of the facade.  The SW tower window is blind, paralleling that of the SE corner and reflecting the interior organization of the building.

Between the towers of the W facade are three windows; the northernmost is divided through by a floor, as is the tower window, reflecting the location of the Woman’s Gallery in the interior.  Both windows extend slightly lower.  Separating the center windows are Secession-style pilasters, which extend to just below the rustication of the towers.

The S facade, having a fourth window, has a more complex rhythm.  Rather than the simple (1)-2-1-2-(1) of the W facade, it has a 1-2-1-2-2-1-2-1 with fractional pilasters framing either side.  On both facades, the rhythm of the pilasters is repeated in the attic level.  The E facade, relatively plain, features the entrances, originally separate ones for Men and Women, though one has now been closed up.  The S corner has a risalite with a blind window, paralleling that of the W facade.  The northern door was originally the Women’s entrance while the southern door, now closed, was the Men’s.  Presumably, both original doors were identical, though  only one elaborately-worked wood and metal creation remains.

Due to the extensive interior alterations --the building has been gutted and converted into a gymnasium, little factual can be said of the interior design.  Scant evidence of the original function remains’ a small depression centered on the southern, Jerusalem-facing wall, located opposite the center pair of pilasters on the S facade, though not marked from the exterior was probably the Torah niche.  This contention further supported by the presence of two blind windows on the E and W facades, which would render the interior lighting more pleasant.  The location in the N of what appears to be the Women’s Gallery would also support this conjectural internal organization, but the substantial alterations to the interior render the significance of any interior organization speculative. 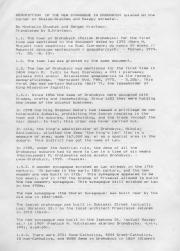 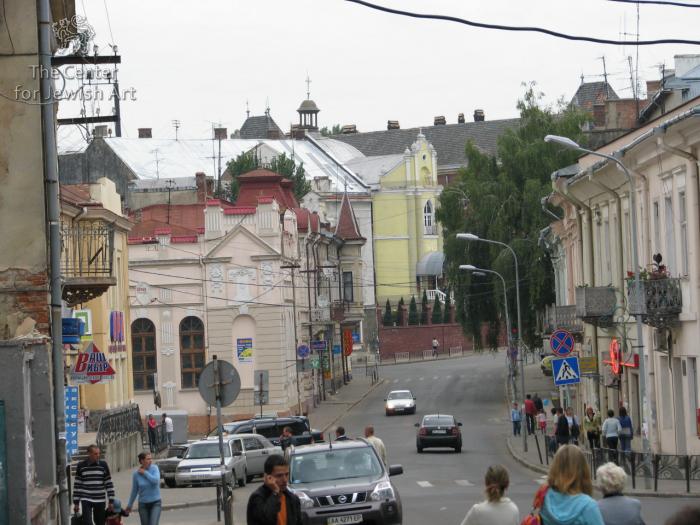 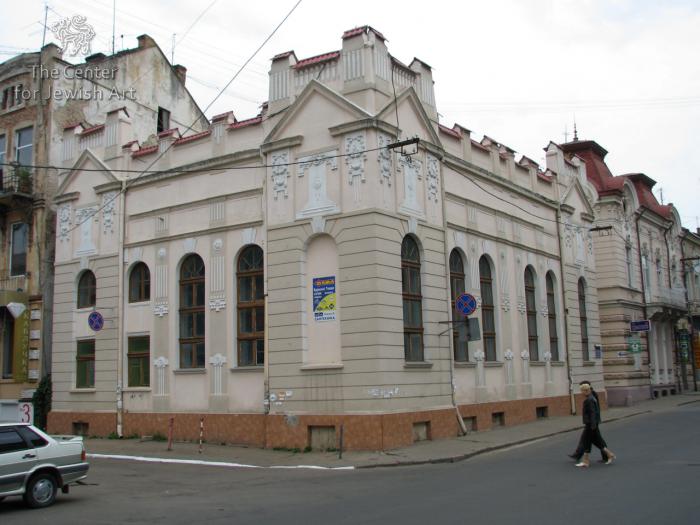 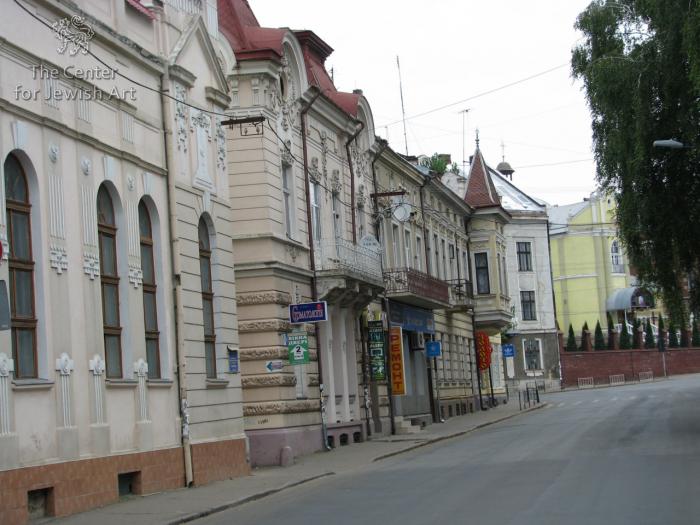 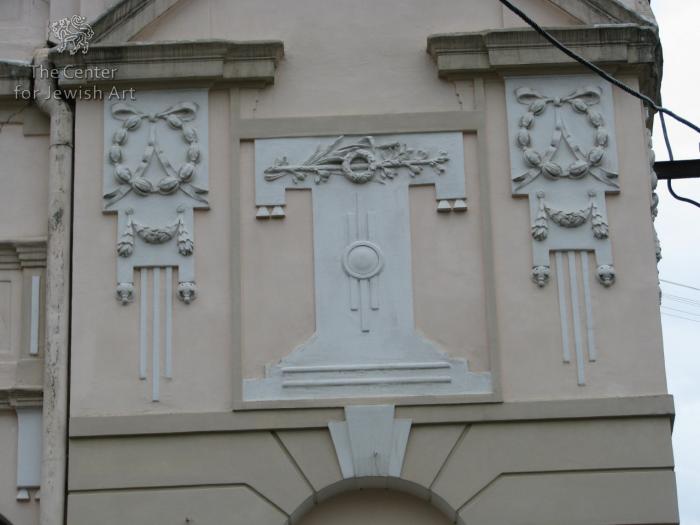 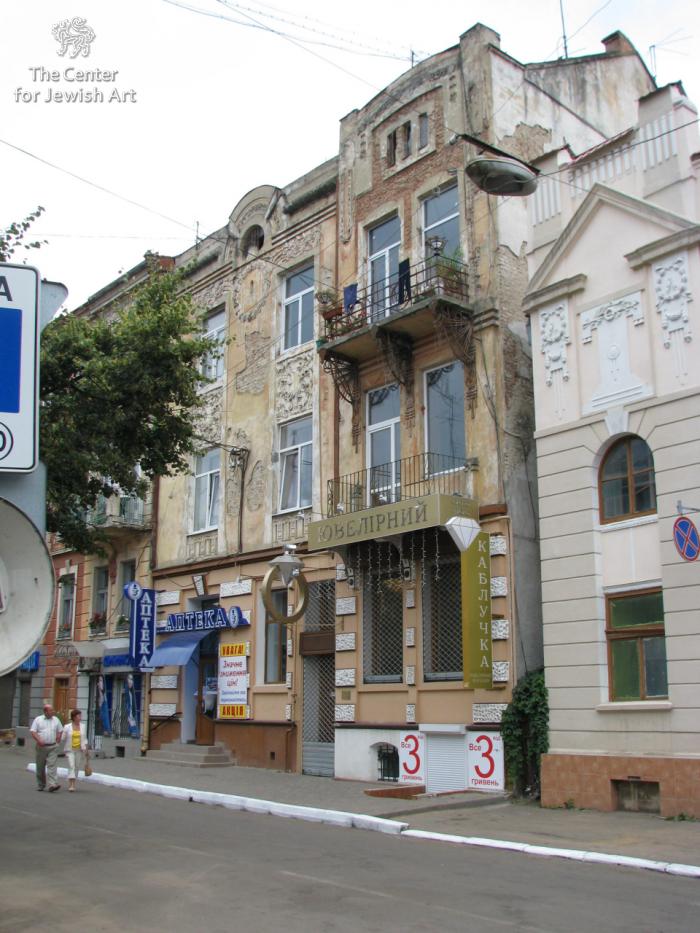 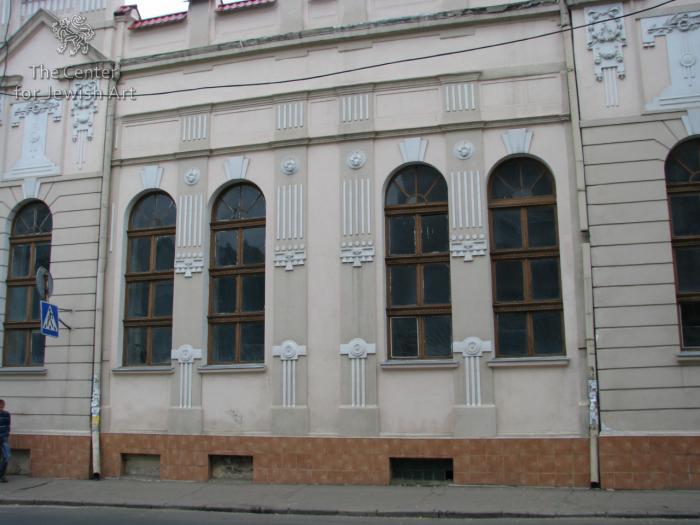 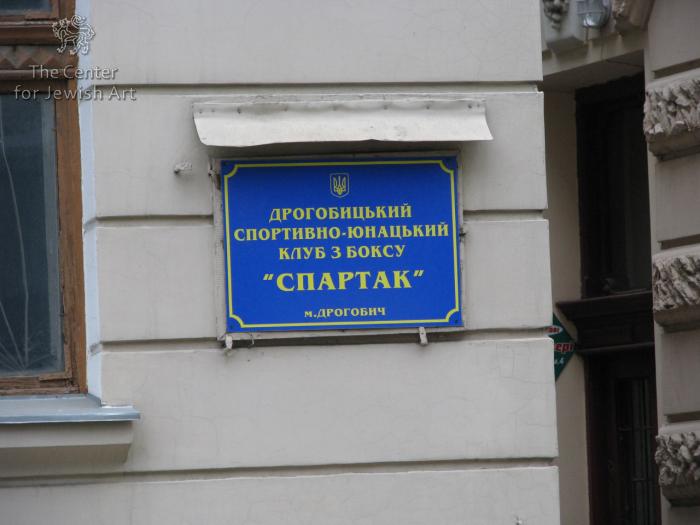