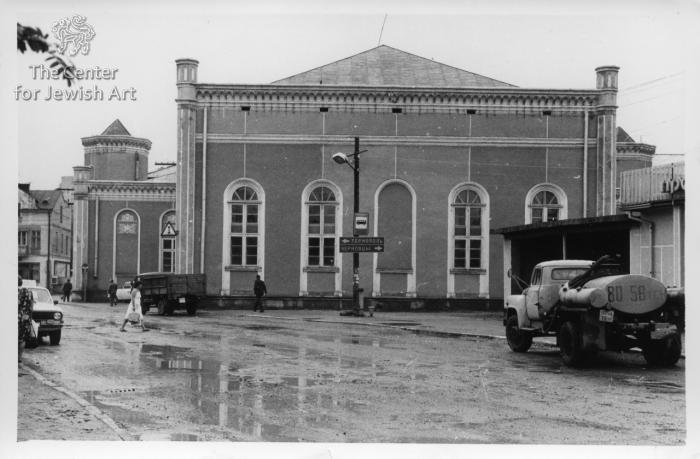 Suggested Reconsdivuction
History/Provenance
Rabbi David Moshe Friedman of Chortkov (1827-1903), the fifth son of Rabbi Israel of Ruzhin established his court in Chortkov after the year 1869 (Asaf, p. 463). The dwelling palace was probably bought from the princess Jeronima Borkowska in 1865 (Sefer Chortkov, p. 31; Asaf, p. 370, n. 17). Therefore, the Kloyz was built after that date. According to the Hassidic tradition, the Kloyz was planned by R. David Moshe's son, Rabbi Israel (Asaf, p. 370). Although the court of the Chortkover Rebbe had no influence in the Jewish community of Chortkov (Asaf, p. 366, n. 9; Sefer Chortkov, p. 69), it was an important factor in the economic life of the town, since thousands of Hassidim arrived to see the Rebbe, especially during the Holydays, and also served as an attraction to inhabitants, especially the large park (Sefer Chortkov, p. 70). After R. Moshe David's death, the Kloyz served his son and successor, Rabbi Israel (1854-1934). In 1914, with the start of the First World War, he fled to Vienna, where he lived until his death. However, he used to visit Chortkov during the Holydays (Sefer Chortkov, pp. 57, 61-2). After the Second World War the building was used by an engineering-building military unit. Part of the roof constructions were removed for use as building material, which caused the beginning of the ceiling's collapse. To prevent the collapse, four octagonal columns were inserted into the prayer hall. In the 1980s, the building was remodeled for the Centre of Youth Art.
Main Surveys & Excavations
Bibliography
Alfasi, Itshak, Hahasidut midor ledor, vol. 1 (Jerusalem, 1995), pp. 61-67; Asaf, David, Derekh hamalkhut: r. Israel miruzhin umekomo betoldot hahasidut (Jerusalem, 1997), pp. 367-373; Austri-Dunn, Yeshayahu (ed.), Sefer yizkor lehantzhat kdoshei kehilat chortkov (Haifa-Tel Aviv, 1967); Even Itzhak, Funem rebens hoif: zikhroines un maises (New York, 1922; reprint: Israel, 1970).
Short Name
Full Name
Volume
Page
Type
Documenter
Z. Lagush, Z. Horbach |
Researcher
Vladimir Levin | 2001, 2016
Architectural Drawings
Z. Lagush, Z. Horbach |
Computer Reconstruction
|
Section Head
A. Cohen-Mushlin | 2001
Language Editor
J. Cardoso, S. Oren | 2001
Donor
|
Object Copyright
Negative/Photo. No.
A163761
Edit Img. ID: 98398