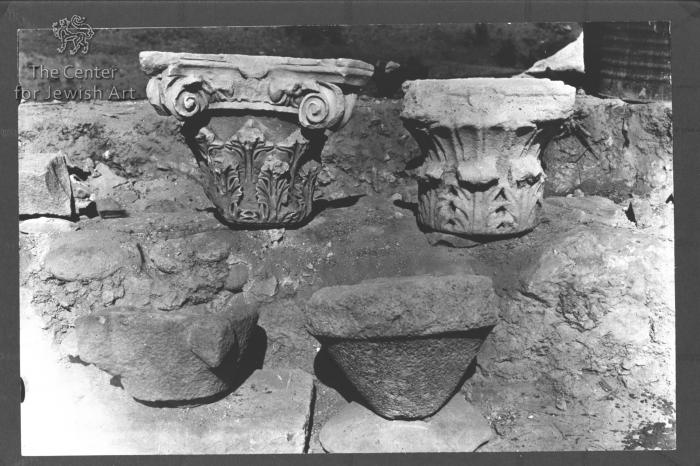 © Center for Jewish Art, Photographer: Unknown,
The synagogue is based on a basilica plan and is oriented towards Jerusalem. The hall of the building is approximately square in shape, measuring 13m x 13.5m. It is divided by two rows of four columns, into a nave (7.80m wide), and two aisles (eastern aisle: 3m wide, western aisle: 2.4m wide). A transverse aisle (1.8m wide) is separated from the nave by two columns and two pillars which are "L" shaped in the corners ?? The columns have no bases, and do not stand on a stylobate. Instead they are sunken? into sockets? which are below floor-level. A raised platform (bima/bema?), measuring 4.55m in length and 1.2m in width, is situated at the center of the southern wall, facing Jerusalem. Two steps lead up to the center of the bima and marble screens once stood on either side of the steps. Remains of posts and panels of the chancel were found in the floor of the bima. The bima leads ?? to the apse which is sunken 1.18m below the level of the bima. Remains of benches line the southern and eastern walls of the hall. The floor of the nave and aisles is paved with mosaics. There are several rooms attached to the hall on the eastern side and there is a narrow court on the southern and western (??unclear).... The main entrance to the synagogue was (is??) in the south-eastern corner of the entire complex in the eastern wall. There, one entered a narrow forecourt which became even narrower within. A bench lined the right side of this forecourt. The forecourt led into a vestibule which was broader on the western side. Thick pillars on either side of the entrances to the forecourt and vestibule apparently served to support arches. Three steps on the right of the western side of the vestibule, lead (led?) into the basilica at its south-eastern corner. The forecourt and vestibule also served as an approach to the annex which consists of four rooms. Two of the rooms adjoin the eastern wall of and the other two lie to their east. The two pairs of rooms are separated by a narrow ???, which runs north and south. Of the two chambers adjoining the basilica, only the larger southern one which is paved with slab stone, "communicates" ? directly with the basilica. A broad bench lines the inner eastern wall of this chamber and a narrow bench lines its inner southern and western walls. The chamber also communicates directly with the vestibule of the synagogue, a narrow court and the smaller northern chamber. The latter has no direct "communication"? with the basilica but has another entrance from the narrow court. The southern and western sides of the basilica were bordered/lined?? by yet another narrow court. This was approached by a door in the middle of the western side of the synagogue and by another on the southern side, to the west of the apse.
Name/Title
Hammat Gader Synagogue | Unknown
Object
Capital
Object Detail
Date
5th century CE (?)
Synagogue active dates
Reconstruction dates
Artist/ Maker
Unknown (Unknown)
Origin
Israel/Eretz Israel | Hammath Gader
|
Historical Origin
Unknown
Community
Ancient
|
Location
Israel | Hamat Gader
|
Site
Unknown
School/Style
Unknown|
Period
Byzantine
Period Detail
Collection
Unknown |
Category
Ancient Jewish Art
Material/Technique
Material Stucture
Material Decoration
Material Bonding
Material Inscription
Material Additions
Material Cloth
Material Lining
Tesserae Arrangement
Density
Colors
Construction material
Measurements
Height
Length
Width
Depth
Circumference
Thickness
Diameter
Weight
Axis
Panel Measurements
Subject
Acanthus Leaf
|
Condition
Extant
Documented by CJA
Surveyed by CJA
Present Usage
Present Usage Details
Condition of Building Fabric
Architectural Significance type
Historical significance: Event/Period
Historical significance: Collective Memory/Folklore
Historical significance: Person
Architectural Significance: Style
Architectural Significance: Artistic Decoration
Urban significance
Significance Rating
0
Coordinates: 32.683403, 35.665100
Ornamentation
Custom
Contents
Codicology
Scribes
Script
Number of Lines
Ruling
Pricking
Quires
Catchwords
Hebrew Numeration
Blank Leaves
Direction/Location
Façade (main)
Endivances
Location of Torah Ark
Location of Apse
Location of Niche
Location of Reader's Desk
Location of Platform
Temp: Architecture Axis
Arrangement of Seats
Location of Women's Section
Direction Prayer
Direction Toward Jerusalem
Coin
Coin Series
Coin Ruler
Coin Year
Denomination
Signature
Colophon
Scribal Notes
Watermark
Hallmark
Group
Group
Group
Group
Group
Trade Mark
Binding
Decoration Program
Summary and Remarks
Suggested Reconsdivuction
History/Provenance
Main Surveys & Excavations
Bibliography
Short Name
Full Name
Volume
Page
Type
Documenter
|
Researcher
|
Architectural Drawings
|
Computer Reconsdivuction
|
Section Head
|
Language Editor
|
Donor
|
Object Copyright
Negative/Photo. No.
Edit Img. ID: 972