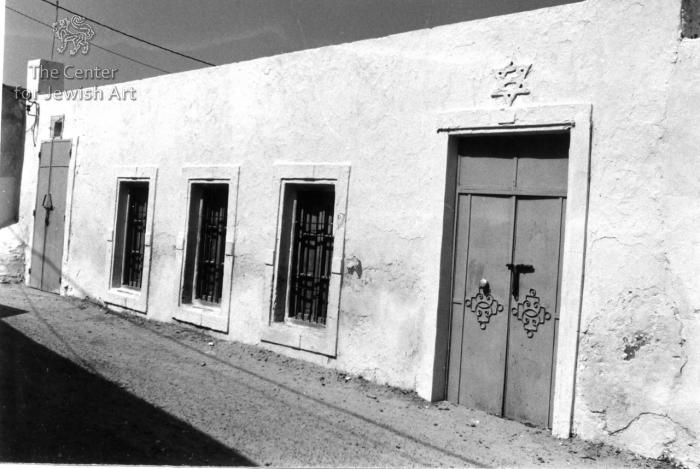 The rectangular synagogue complex comprises a prayer hall built between two inner courtyards set in a north-south axis and is surrounded by a wall.

The exterior wall surrounding the complex forms a free standing unit.
The eastern side of the wall bordering the alley has three entrances and windows set inbetween the two southern entrances. The northern, which was probably the former main entrance, leads to the northern courtyard, while the two other doors lead to the southern one and are in contemporary use. The rectangular windows are set inside protruding frames and are almost as high as the entrances.
The northern side has an additional entrance to the northern courtyard.
The western wall is blocked while the southern wall is shared with other buildings.

The rectangular inner southern courtyard nowadays functions as the main entrance to the synagogue. It is surrounded by a roofed arcade and benches are built along the courtyard's walls. The courtyard is partly shaded by a thatch used for Sukkoth (the Festival of Tabernacles). A water pit is under the thatch.
The northern arcade leads to the prayer hall through a door placed at its center. Two windows flank the door from each side.
A rectangular niche is reached through a door at the south-west corner and probably serves as a store-room.

The rectangular inner northern courtyard is plain and surrounded by walls. Nowadays it is reached through a door set at the northern wall of the prayer hall . Windows flank the door: two windows at its right and one at its left.