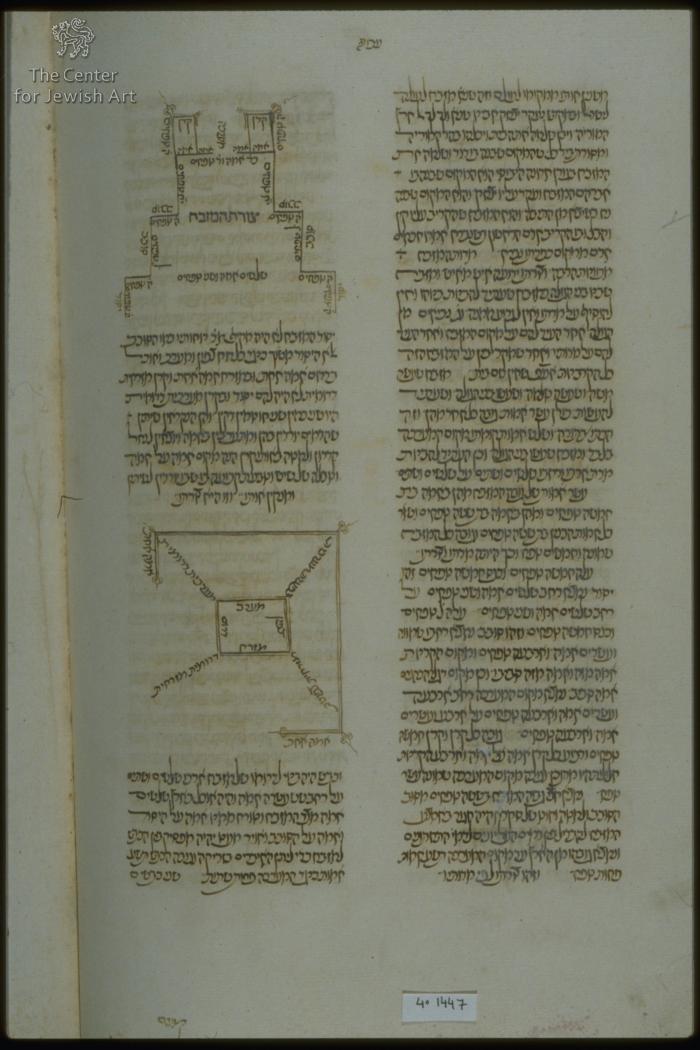 Fol. 181v: Within the left text column are two illustrations of the Altar. At the top a cross-section of the Altar of Sacrifice with its measurements inscribed according to Maimonides (Mishneh Torah VIII, I, 2:7,8). Stepped structure with horns is composed of three stages: the base, יסוד the circuit סובב and the third stage. The base is "thirty amot and two tefahim" wide and "five tefahim" high with an offset of five tefahim. The next stage is "thirty tefahim" high with an offset of five tefahim. The third stage is "eighteen tefahim" high and "twenty four amot and four tefahim" wide. On top is one amah from each side alluding to the priest's standing place. It is surmounted by two horns "five tefahim" high and amah wide inscribed twice on bases of the horns. Between the horns is inscribed vertically: מערכה At the top of each horn is a fleur-de-lys. In the center is inscribed צורת המזבח "Form of Altar". At the bottom is the second diagram depicted from a bird's-eye view. The central square marks the place of sacrifice. The four winds are inscribed in the central rectangle: "west" on the top, "north" on the right, "east" at the bottom and "south" on the left. The half-points of the compass are inscribed diagonally at the four corners, marking the directions of the horns. An external square is opened on south-east, at the two open edges inscribed אמה אחת "one amah"