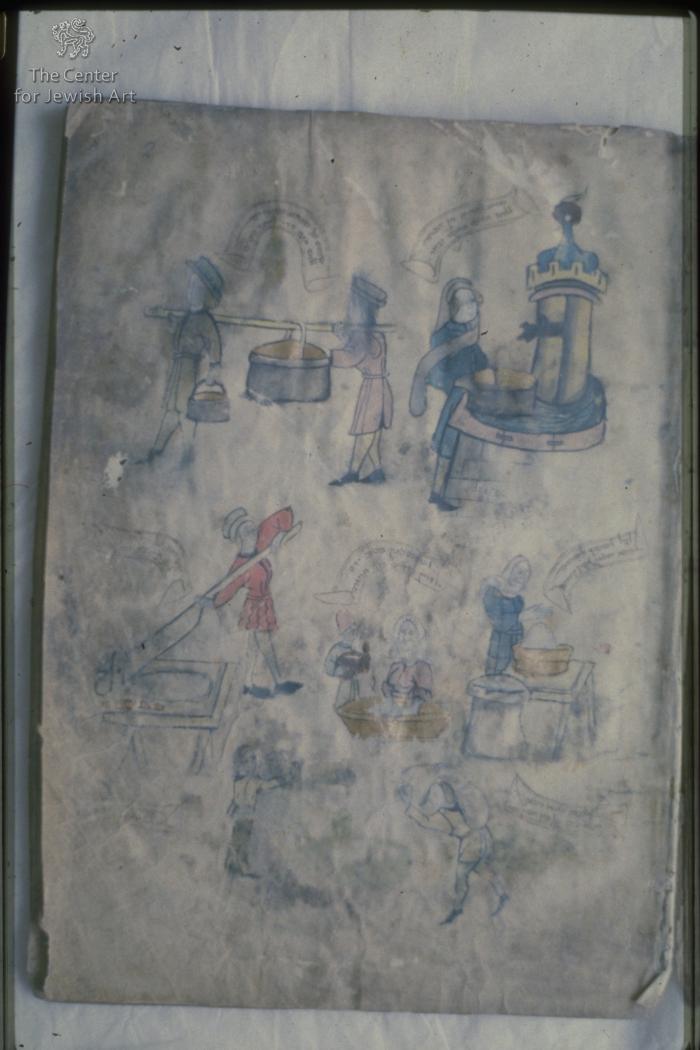 On the left are seven scenes depicting the preparation of the mazah in a non-consecutive order.

In the lower zone on the right is a man carrying a sack of freshly ground flour on his shoulder, inscribed:

"He carries the sack on his shoulder, for the people of his household by his word shall be ruled" (a paraphrase on Gen. 41:40).

In the same zone, to the left, is a boy holding a sack of flour (damaged). Inscribed (most of it effaced):

"He ties his sack on...so his joy will not be replaced with…"

In the upper zone, to the right, is a man drawing water from a well with a metal bucket. Inscribed:

"He is drawing the water from the well to knead the mazah, as we will explain."

To the left, two men are carrying a bucket of water on a pole. The man on the left also carries a smaller bucket in his hand. Inscribed:

"Both carry loads (of water) on their shoulders to knead the mazah, in order to recount miracles."

In the middle zone, to the right, is a woman standing near a table on which a heap of flour is set in a bowl and next to her foot is an open sack. Inscribed:

In the centre is a woman kneading dough in a trough, while a boy pours in water. Inscribed:

"She kneads the dough with both her hand(s), while her beloved son pours the water."

In the middle zone, to the left, is a man flattening the dough set on the table, with a long-handled spatula.

"He does not spare his labour (but) kneads the mazah with all his might."