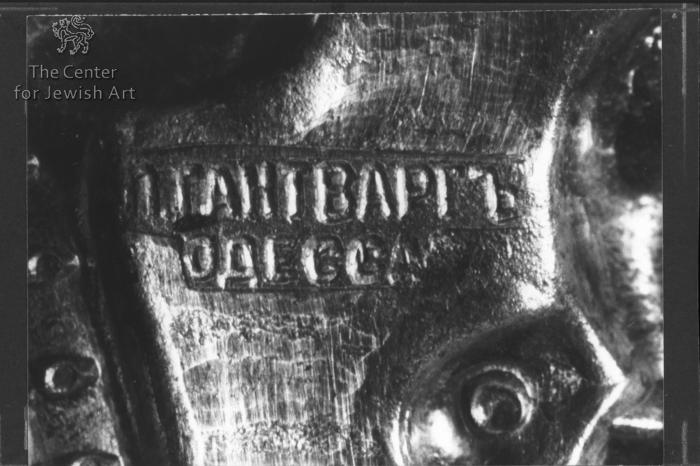 The silver Torah shield is rectangular with undulating edges and is decorated symmetricaly with a central axis.

In the centre is a depiction of the tables of the covenant inscribed with the beginning of the ten commandments. A bird facing downwards spreads its wings and legs is set above the tablets which are held by two rampant lions, regardant and revealing tongues. Each lion is flanked by a column decorated with twisted lines and headed by a capital of foliate scrolls on which a squirrel is sitting. Each squirrel holds a branchs, face the other and have a nut-like knob on its head. Two rectangular plaques support the columns and flank a medallion bears inscription which read from right to left in square letters:

The central medallion is surrounded by a garland of scrolls. Two birds facing each other are depicted below the plaques in the lower corners. A dominant crown, decorated with a pattern of dots and diamonds, is depicted in the upper central part of the shield.

Scrolls and flowers fill the remaining areas between the various motives and a pattern of dots decorate the edges of the shield.