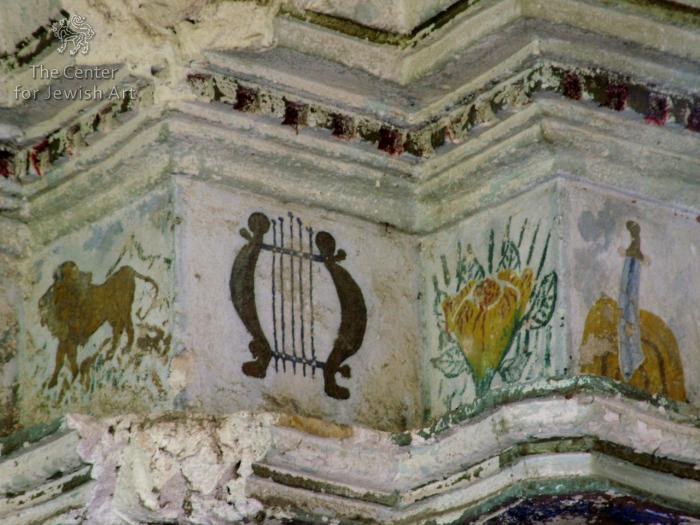 The tribe of Simeon is represented by a sword with the town gate of Shechem, according to Gen. 34:25: "And it came to pass on the third day, when they were sore, that two of the sons of Jacob, Simeon and Levi, Dinah's brothers, took each man his sword, and came on the city boldly, and slew all the males [in Shechem]" and according to Gen. 49:5-6: "Simeon and Levi are brothers; instruments of cruelty are in their habitations. Let me not enter their council, let me not join their assembly, for they have killed men in their anger and hamstrung oxen as they pleased."

The tribe of Reuben is represented for the second time by a mandrake, according to Gen. 30:14-16: "During wheat harvest, Reuben went out into the fields and found some mandrake plants, which he brought to his mother Leah. Rachel said to Leah, “Please give me some of your son’s mandrakes.” But she said to her, “Wasn’t it enough that you took away my husband? Will you take my son’s mandrakes too?” “Very well,” Rachel said, “he can sleep with you tonight in return for your son’s mandrakes.” So when Jacob came in from the fields that evening, Leah went out to meet him. “You must sleep with me,” she said. “I have hired you with my son’s mandrakes.” So he slept with her that night.

The tribe of Levi is represented by a harp, according to I Chron. 15:16: "David told the leaders of the Levites to appoint their fellow Levites as musicians to make a joyful sound with musical instruments: lyres, harps and cymbals" and according to II Chron. 5:12: "All the Levites who were musicians ... stood on the east side of the altar, dressed in fine linen and playing cymbals, harps and lyres."

The tribe of Judah is represented by a lion, according to Gen. 49:9: "You are a lion’s cub, Judah; you return from the prey, my son. Like a lion he crouches and lies down, like a lioness—who dares to rouse him?"