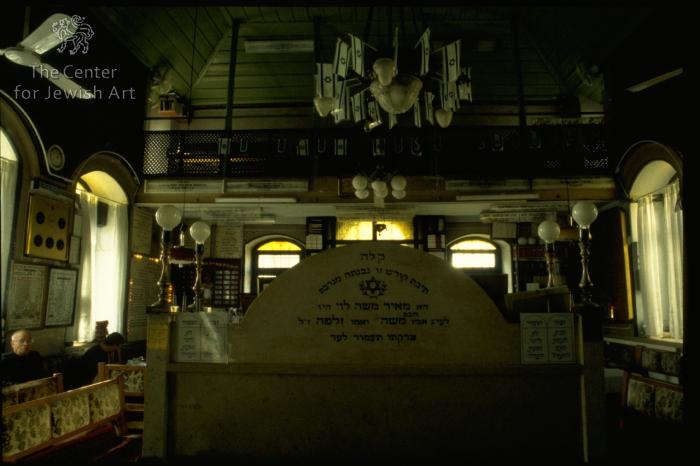 The rectangular Tevah comprises of a stage, a table and a banister.

The Tevah is reached from its western side by two steps leading to the stage.

The rectangular  table is situated at the eastern part of the stage. At its western side the table bears two doors, covering a small closet.

The stone banister surrounds the Tevah from three sides, except for the western one. Around the outer sides of the table the banister heightens, framing it. At its eastern side the banister is rounded and at the corners of the northern and southern sides it bears four lamps.

A dedicatory inscription appears at the outer, eastern side of the Tevah. It is written in five lines, the second line from the top is arched and a Star of David appears below it. The inscription reads:
“Dedicated to the Lord / This holy Tevah was built by the donation / of Mr. Meir Moshe Levy may the Lord sustain him and grant him favour / for the exaltation of the soul of his father the wise Moshe and his mother Zilpa of blessed memory / may is righteousness stand forever “

This is not the original Tevah of the synagogue. The original one was a wooden Tevah which was later replaced by a rounded stone? Tevah. The existing Tevah replaced the rounded one.