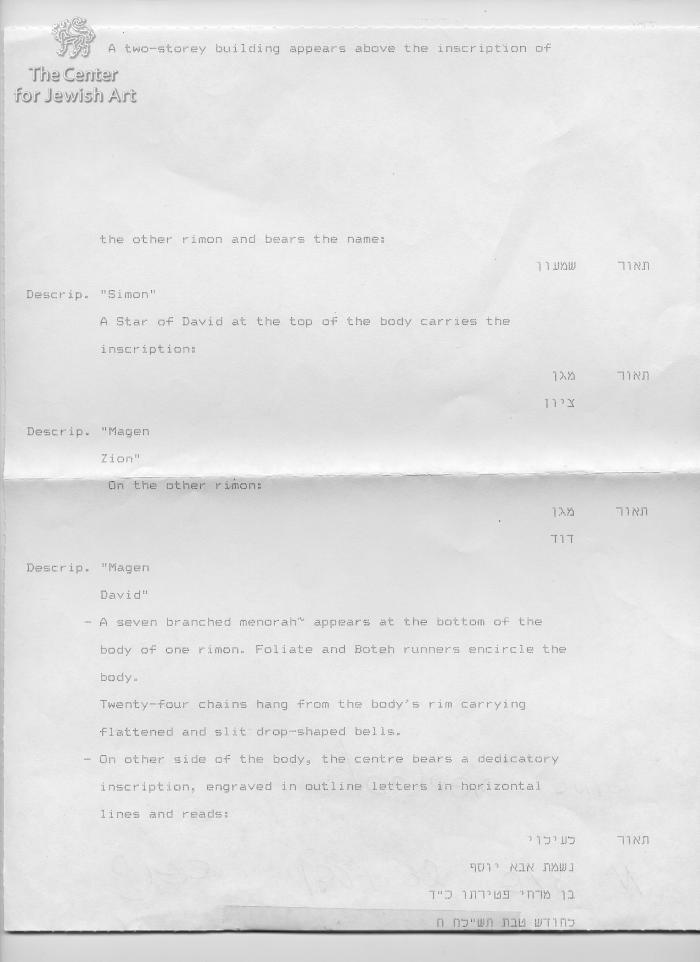 The flat tulip-shaped finial consists of a shaft and a body.
The cylindrical tapering shaft is decorated with a net of rhombuses enclosing flowers. The upper and lower borders are encircled by a foliate ring. The shaft is surmounted by a globular capital decorated with a pattern of scales.
The flat body is inscribed and decorated on both sides; on top is a Star of David enclosing the word Zion, on the front Magen Zion (the shield of Zion), on the back, below the star are depictions of two sites: in front is the Western Wall topped by a palm tree, and flanked by two structures, representing the Temple-site and Solomon's School (Midrash Shlomo). Behind it is a walled city, inscribed "Simeon", representing the city of Shechem (Nablus). Below the inscription on the front is the sign of the tribe Reuben, represented as a rising sun and inscribed "Reuben", while on the back beneath the inscription is the seven-branched menorah (see: Remarks: nos. 1, 2).
The Hebrew inscriptions are engraved in linear characters. The front is inscribed with Jacob's blessing to Joseph and sons, Ephraim and Manasseh (Gen. 49:22; 48:16; with some misspellings):

The back encloses a dedicatory inscription:

A band formed by a running almond-shaped (boteh) pattern, frames both inscriptions. Chains are suspended from the body's rim and the globular capital, carrying flattened and slit drop-shaped bells.