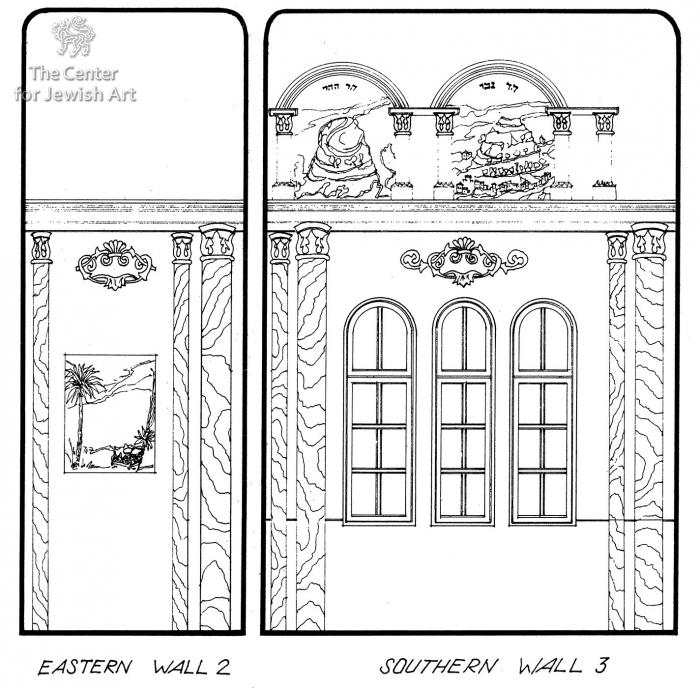 The synagogue is a simple freestanding building of irregular shape situated among dwelling houses.  It consists of two volumes – a two-storey main volume which contains the prayer hall and a single storey northern volume with auxiliary premises. The main volume is a two-storey high trapezoid structure covered by a hipped roof.  It contains the main prayer hall with a women's gallery on the west and north, a small prayer room in the north and a staircase to the women's gallery.  The south facade of the volume faces the street; its west facade faces the courtyard, which is separated from the street by a grillwork fence. The northern volume is a trapezoid single storey structure, connected to the north facade of the main volume.  It consists of four rooms: two communal offices, a kitchen and a bathroom, and it is covered by a lean-to roof.  It has two windows and two doors leading to the courtyard. Description of the exterior: The south or main facade is facing the street.  It is framed by two pilaster-strips and divided into two sunken fields by a central pilaster-strip.  They are topped by a wide blank freeze and a moulded cornice.  An onion shaped dome on a low octagonal drum protrudes over the roof, above the central pilaster-strip.  Each facet of the drum is pierced by a small bull's eye window. Two globular finials on cubic bases are mounted over the lateral pilasters.  Each finial and the dome terminate with a Star of David apex. Each field of the facade has an arch enclosing a triple window with round arches and colonettes.  The lunette of each arch is decorated by a pair of double-stepped depressed circles, and the arch is decorated with five protruding voussoirs.  The windows are set back in moulded frames.  The spandrels of these frames are covered by concrete plaster in the "fur coat" technique.  The panels under the protruding window sills as well as the lower part of the pilasters are currently covered by white ceramic tiles with a diamond-shaped pattern made from blue tiles. The western facade is comprised of two tiers and framed by two pilaster-strips. Another one divides it into two unequal sections, corresponding to the main synagogue in the southern part and the small prayer room in the north. The lower tier of the southern part is preceded by a gabled entrance hall flanked by two rectangular windows. The entrance hall’s western wall has a wide rectangular window topped by two round ones.  A door leads into the entrance hall from the south, whereas its northern wall is blind. On the upper tier of the southern part are three rectangular windows corresponding to the women’s gallery, which extends in the interior on the north and west walls. In the northern part there is a door which leads to the small prayer room.  A window above it gives light to the women's gallery. The northern facade is three tiers high.  There are two windows on the first tier, corresponding to the small prayer room.  A side entrance covered with a lean-to roof leading to the women's section is located in the eastern corner.  In the second tier there are three windows, corresponding to the women’s gallery, and on the third tier there is a small window on the eastern corner corresponds to the attic.  All the openings are rectangular. The east wall of the main volume is a blank firewall.