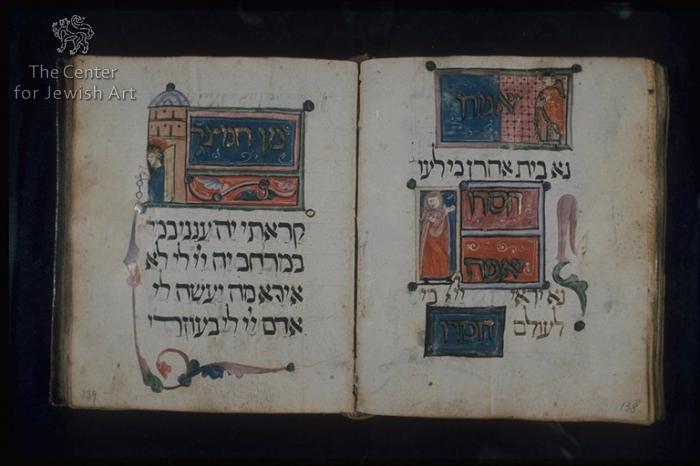 In the upper part of the page the initial word panel יאמרו )נא בית אהרן( "Let the house of Aaron say" is illustrated on the right with a figure dressed in a purple gown with a golden rim like high ranking Catholic priests. The artist probably intended this to be the golden garments of the High Priest (cf. Catalog, p. 75). In the center of the page the combined initial word panel יאמרו )נא יראי יי'( "Let them that fear the Lord say", written in the lower compartment, is illustrated on the left by a hooded man spreading his hands and looking backwards. In the outer margin is a bearded human grotesque.

The initial word מן המצר )קראתי יה( "Out of my stroitness (I called upon the Lord)" is illustrated on the left by a bearded man coming out through a gat of a domed tower holding chains in his hands. A foliate scroll extends from the lower left hand corner of the panel.