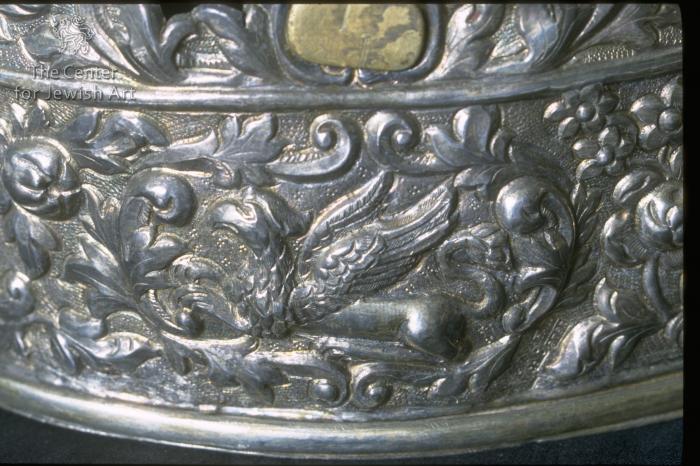 The three leveled silver Torah crown consists of a main part, a crest and an apex. Each level is composed of a base and arms.

The lower level as the main part, has a coronet like base, composed of a circumferal band surmounted by flowers and leaves. The band bears three cartouches depicting animals (9700) alternating with three cartouches inscribed with an inscripthion. In square fieled letters it is read: "זה הכתר תורה##כתר כהונה שייך לה'##כתר מלכות זנ)זאת נדבת(חולם מטאל" "This is the crown of the Law. The crown of priesthood belong to the Lord. The crown of Kingship. This is a donation of Holam Metal (from Talno?)" Foliate scrolls with leaves and flowers decorate the band.

The band is surmounted by flowers from which foliate scrolls emerge. Six arms that widen in the centre, are attached to the base, between the flowers. Each arm is decorated with an undulating branch with flowers. The arms bear C scrolls medallions at the bottom and are topped by a bird with spread wings standing on a cut globe. The arms are joined together on top by a cut-dome, of an openwork scrolls. A flower serounded by leavs from which bells hang, is attached to the cut-dome between the arms. A two leveled crest is mounted over a concave unit. Six arms in the shape of rampant regardant lions emerge from a undulating base to support a small upper crown. The upper crown repeats the shape of the main part. Bells hang from between the arms of the second and third levels. The apex is a bird with spread wings holding a bell in its beak and standing on a floral circlet.