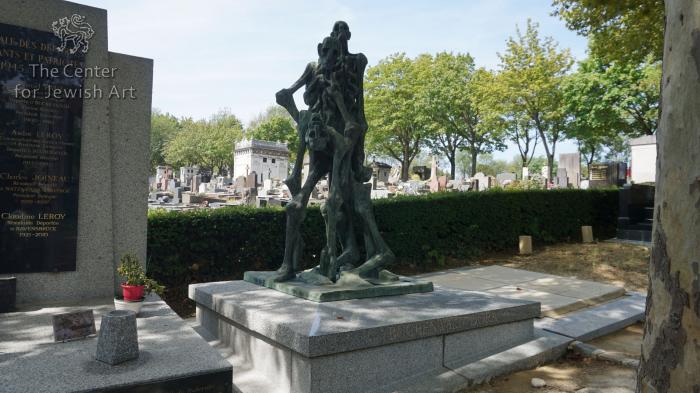 The monument is in section 97 of the cemetery in an area of other collective monuments.

The bronze sculpture represents three emaciated prisoners who are little more than standing skeletons. Their heads look like skulls and their bones and joints protrude. The figures are connected, they almost seem to intertwine. Two figures are upright, and they support another who has fallen backward. The figures represent suffering, solidarity, and human dignity.

The figures seem modeled on the photos by Margaret Bourke-White at the time of liberation and then widely published.  The sculpted figures resemble the bodies in the piles of corpses and of survivors who seemed like the walking dead.

on the edge of the base

Translation: Let this forever show how the Man had to fall / And how courage and devotion / Maintain his name of Man

The monument is one of more than a dozen memorials erected in the past 70 years commemorating victims of various Nazi concentration and death camps. These monuments have been erected by camp survivors, political organizations, and other associations beginning in 1949, when memorials to victims of Auschwitz-Birkenau (June) and the camp at Neuengamme (November) were dedicated.

Created by sculptor Louis Bancel, who was asked by his friend Boris Taslitsky in 1957 to create the monument dedicated to the memory of Buchenwald’s victims. Taslitsky, who was born in Paris, was Jewish, a Communist, a soldier, a Resistance fighter, and a survivor of various prisons and of Buchenwald. In 1946 Louis Aragon published 100 drawings of Buchenwald by Taslitsky, and these, together with photos taken at the time of the liberation of the camp, became iconic representations. The monumental bronze sculpture (inaugurated April 5, 1964) is set on a granite base designed by architect M. Romer (himself a deportee), recalls Taslitsky’s drawings and is engraved with lines of poetry by Louis Aragon.

Most of the inmates and victims at Buchenwald, at least until the very last months of the camp. were not Jewish and this is not a Holocaust Monument per se. Still, the memorial plays an important role in the development of Holocaust monuments and iconography. It is one of a group of works from 1950s and 1960s that focuses on the physical - even cadaverous - state of Holocaust victims, rather than idealizing them as healthy heroes and fighters. In this monument, however, though the three figures are shown starved almost to a skeletal state, they remain unbowed. Bancel has managed to combine the motifs of suffering and heroism.

In France, a coalition of Resistance fighters, Jewish deportees, and other victims of Nazi crimes worked to create a public narrative of suffering and heroism balancing the themes of the Gaullist politics of memory of the 1950s with those of the political left. France’s Communists tended to commemorate the sacrifices of the Resistance and of the victims of the camps as acts of martyrdom for the Left. Significantly, monuments for victims of the camps were first included alongside graves of and memorials to leaders of the Communist Party. The Buchenwald-Dora monument includes a quote from Surrealist poet Louis Aragon, who was an active Communist, too.

Meanwhile, the official Jewish Community began in the 1940s to place plaques in synagogues remembering Jewish victims under the heading "Morts pour la France," (Fallen for France), even though many victims died through the complicity of French authorities and police.