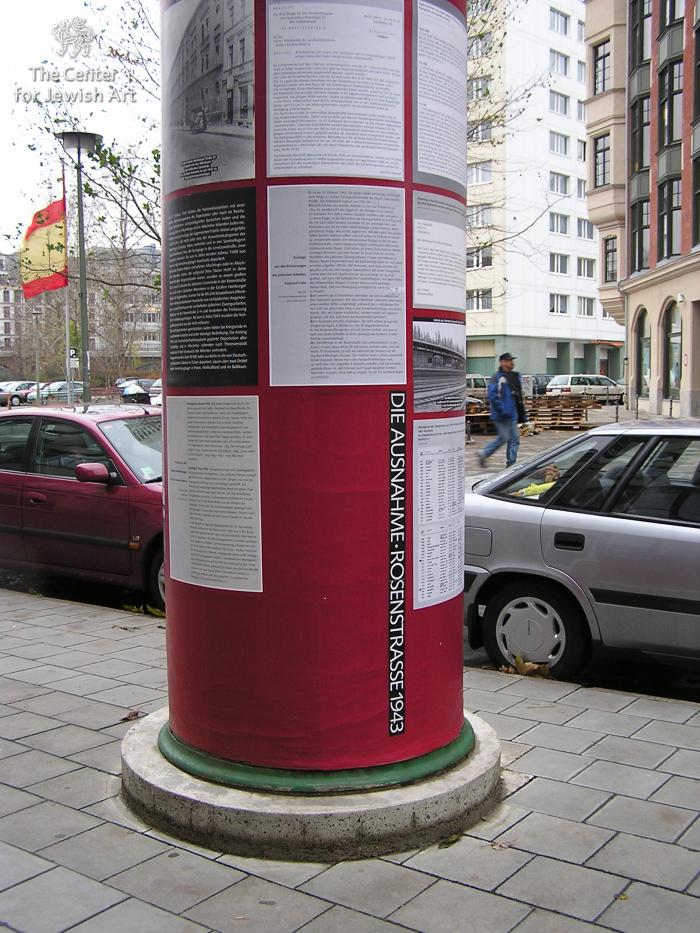 When the monument was designed in the 1980s the history of the Rosenstrasse protest was little known. Artist Ingeborg Hunzinger had designed the sculptural monument, but it could not be erected in communist-era GDR. In 1989, Nathan Stolzfuss reported on the 1943 protests in the weekly newspaper Die Zeit and soon after, a project group was founded to promote a memorial on Rosenstraße.  After German unification, the Berlin Senate enabled the erection of Hunzinger’s “Block of Women” ensemble of monumental sculptures in 1995. The site chosen is a small park adjacent to the site of the protests, and near the site of Berlin’s destroyed Old Synagogue.

Despite the power of the animated figural sculptures, little information was initially provided to inform viewers about the purpose of the work and the history of the commemorated events. This was changed in 2011, when a kiosk, replicating the appearance of an earlier “Litfaß column” (advertising column) was installed nearby on Rosenstrasse with historical information and photos that provide more information.

The Rosenstrasse protest of late February and early March 1943 was the rare instance where German civilians actively protested Nazi policies and actions. In ten years of Nazi rule, after the first brutal crackdowns in 1933 until 1943, such public resistance in Berlin and elsewhere was unknown. The women risked their lives to successfully gain the release of their Jewish husbands who had been rounded up for forced labor and likely deportation. Thus, many of the prisoners managed to survive the war. The reason for the release of the men, and what the effectiveness of the women’s protest tells us about the unfulfilled potential of protest in the Nazi era is the subject of much scholarly, political, and ethical debate.

The group of sculptures is located at the site of the former Jewish administrative building in which the Gestapo held the men captive, which was subsequently destroyed in the war. The actual building on Rosenstraße in which the men were held, was destroyed during an Allied bombing of Berlin at the end of the war.