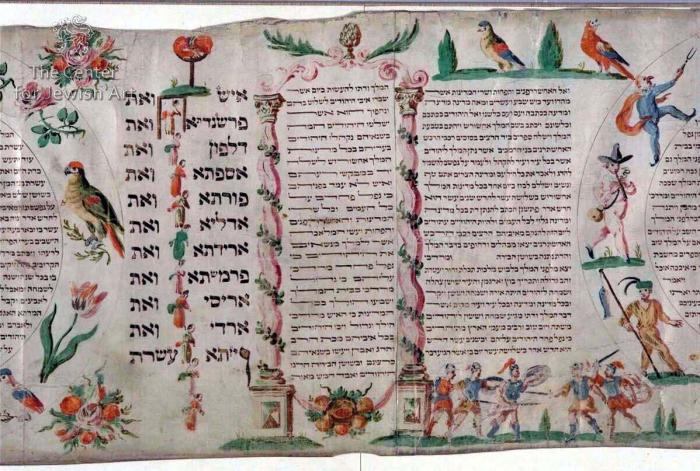 Above the ninth column of text are two parrots and below it, there is a group of fighting people, possibly Jews fighting their enemies (it alludes to Es. 9:5-12).

Above the tenth column of text is a decoration with a cone and below it, there is a fruit festoon. The text is flanked by twisted columns entwined with vines.

In the eleventh column of text, a narrative scene is incorporated - the hanging of Haman's ten sons (Es. 9:14). Additionally, in the upper margin, the execution of Haman is depicted - he is shown here on the Catherine wheel although the Book of Esther says that he was hanged (Es. 7:10). On the left are two bouquets of flowers.

The manuscript is very well preserved.

The scroll is formed of 5 sheets, in total containing 13 text panels with 23 or 24 lines of different lengths, except for col. 11 which has 11 lines divided into two half-columns.

The text is written in Hebrew square Ashkenazi script in brown ink on parchment membranes.

The letters ח (Es. 1:6) and ת (Es. 9:29) are slightly larger than an average letter in the scroll. Other enlarged and diminished letters are included in col. 11.

The ruling is made with a hard point, but it is barely visible.

It seems that this scroll and two other scrolls featuring the same style (see "Related objects) were executed by the same artist, although two of them are decorated with roundels, while the third one is decorated with octagons.

It seems that the final part of the manuscript was painted by another artist than the main part of the decorations.

A short description of the scroll and its images are available on https://data.jck.nl/page/aggregation/jhm-museum/M000440 (accessed on 9.08.2021).