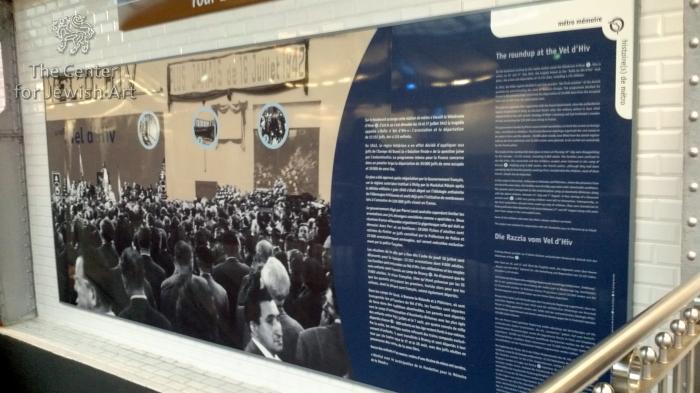 The deportation of Paris's Jews was one of many callous acts of French collaboration in Nazi aims, which have gradually received more attention in France and abroad.  Émile Hennequin, director of the Paris police, ordered on July 12, 1942 that "the operations must be effected with the maximum speed, without pointless speaking and without comment."  Local police reports document that beginning at 4:00 a.m. on 16 July 1942, 13,152 Jews were arrested, of which 5,802 (44%) were women and 4,051 (31%) were children.  Some people were warned by the French Resistance or hidden and escaped being rounded up.  The arrested had to leave their homes quickly - they could take only a few items; blanket, sweater, shoes, and two shirts.  Conditions in the velodrome were horrendous, with little food and water, few toilets, and no other amenities.

In 1959, a fire destroyed part of the Vélodrome d'Hiver, and the rest was demolished. A block of flats and a building belonging to the Ministry of the Interior now stand on the site.  Since then, a series of markers have been installed in the area to remember the deportation and commemorate the victims.  In 1959, a plaque that was placed on the track building was moved to a new structure at 8 boulevard de Grenelle.  This commemorative plaque faces the Bir-Hakeim métro station, mentioned for the first time the numbers and fate of Jews who were held inside the Vélodrome d'Hiver.

On 3 February 1993, the President, François Mitterrand, commissioned a monument to be erected on the edge of the quai de Grenelle. Near where the Velodrome d'HIV stood. The monument was dedicated on 17 July 1994 (see CJA object 38467), and since then a ceremony is held at the site every year.

In 2008 more a more descriptive and informative narrative placed at the nearby Bir-Hakeim station of the Paris Métro.