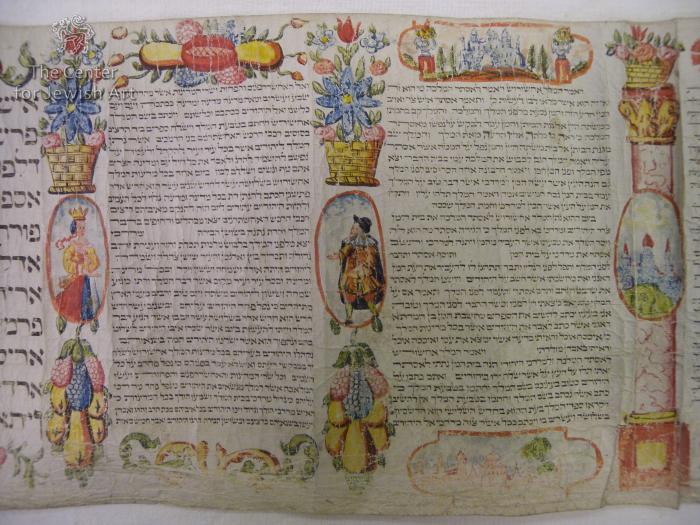 The seventh column of text is flanked by a column (on the right) and a decoration composed of various motifs (on the left). The column is decorated with an oval with a landscape and above it, a basket with flowers is placed. The decoration on the left is composed of an oval with a figure of Mordecai, a basket with flowers above it, and a garland of fruits below it. The upper and lower margins are adorned with landscapes.

The eighth column of text is flanked by various decorations composed of ovals with figures of Mordecai (on the right) and Queen Esther (on the left), baskets with flowers placed above them, and garlands of fruits placed below them. The upper and lower margins are adorned with a floral and fruit composition and acanthus leaves.

The membranes are preserved in satisfactory condition, but they are crumpled and discolorations can be seen on them.

The decorations are seriously damaged especially on the opening section of the scroll.

In general, the lower margins are preserved in worse condition than the upper margins.

The text is well preserved.

The scroll is formed of 2 sheets, in total containing 11 columns of text with 29 lines each, except for col. 9 which has 11 lines divided into two half-columns.

The text is written in Hebrew square script with tagin in brown ink on parchment membranes that are rather thin, delicate, and slightly suede on the blank side.

The ruling - upper and lower horizontal lines - is made with a hard point.

Corrections are made with a pencil; one of them is in the upper margin above col. 5.