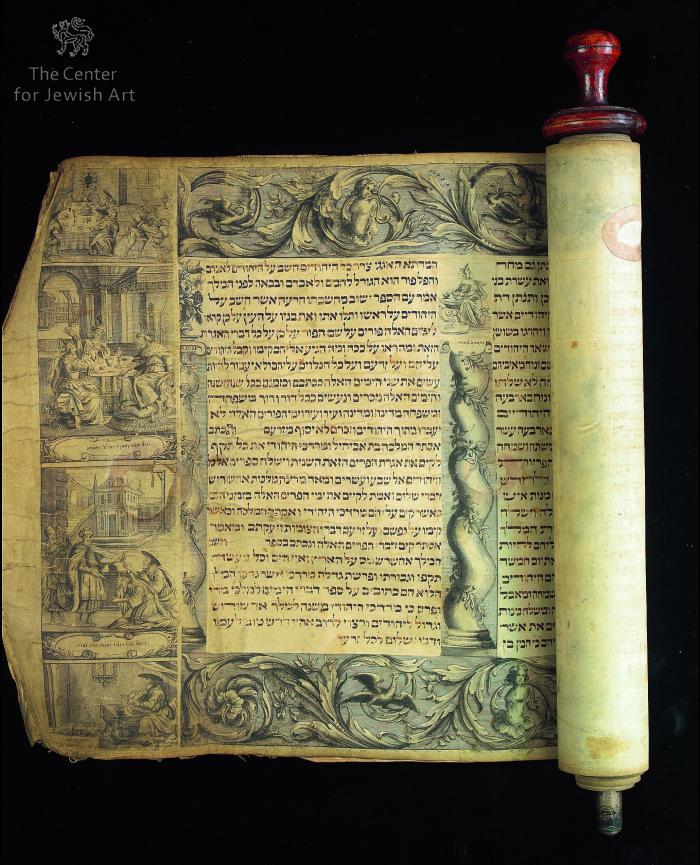 Text column no. 16 (sheet no. 4) is surrounded by the printed border. The upper and lower margins are decorated with a composition of dense acanthus leaves in which nude busts, landscapes framed in decorative cartouches, and birds (possibly phoenixes) are interwoven. The text is flanked by twisted columns; above them, Queen Esther writing the Purim letter, and a vase with flowers (partly visible) are depicted.

The final section of the scroll includes four narrative scenes from the Book of Esther that are printed one under the other:

3) Queen Esther before the king while he extends his scepter to her, and Mordechai kneeling in front of him, while he receives the ring and becomes the new royal vizier (Es. 8:2-4);

Below the 2nd, 3rd, and 4th scenes, elongated cartouches for inscriptions are placed; at present, the texts are barely visible.

The scroll is preserved in good condition, although some blemishes can be noticed on it.

The roller is incomplete.

The scroll is formed of 4 sheets containing 16 columns of text with 24 lines, except for col. 14 which has 17 lines (11 of them - containing Haman's sons section - are divided into two parts).

The text is inscribed in Hebrew square Ashkenazi script, in black ink, on the flesh side of parchment membranes that are rather thin, grey, and suede (on both sides).

There are some corrections in the text.

The ruling - made with a stylus - is barely visible.

Scribes
Script
Number of Lines
Ruling
Pricking
Quires
Catchwords
Hebrew Numeration
Blank Leaves
Direction/Location
Façade (main)
Endivances
Location of Torah Ark
Location of Apse
Location of Niche
Location of Reader's Desk
Location of Platform
Temp: Architecture Axis
Arrangement of Seats
Location of Women's Section
Direction Prayer
Direction Toward Jerusalem
Coin
Coin Series
Coin Ruler
Coin Year
Denomination
Signature
The signature of the engraver appears in one of the narrative scenes at the beginning of the scroll. In the lower-left corner, on the checkered floor, the short Latin formula "Franck fec: Prag" - "made by Franck [in] Prague" - can be read.
Colophon

Around 15 megillot featuring the same border are housed in private and institutional collections. Yet another exemplar used to be a part of the Gross Family Collection (no. 081.012.044) but in 2003 was stolen from the Beit Hatfutsot Museum in Tel Aviv (Hilfe erbeten: Judaica Diebstahl: http://www.judentum.net; accessed on 14.12.2018). There are also two scrolls embellished with the same border but with texts other than the Book of Esther.

Some vignettes in the scroll are diagonally placed to the twisted columns.

On the blank side of the first sheet, there are some Hebrew letters showing a different style than the professional hand-writing in the scroll (probatio pennae?).

A triangular piece of fabric with a string has been sewn to the end of the scroll. This was planned to be used to wrap the scroll but, it was placed in the wrong place. Also, the roller stitched to the right edge of the first sheet suggests that someone (one of the manuscript's owners?) did not perceive that this manuscript is to be read from right to left.

Some "patches" are glued on the blank side of the sheets.