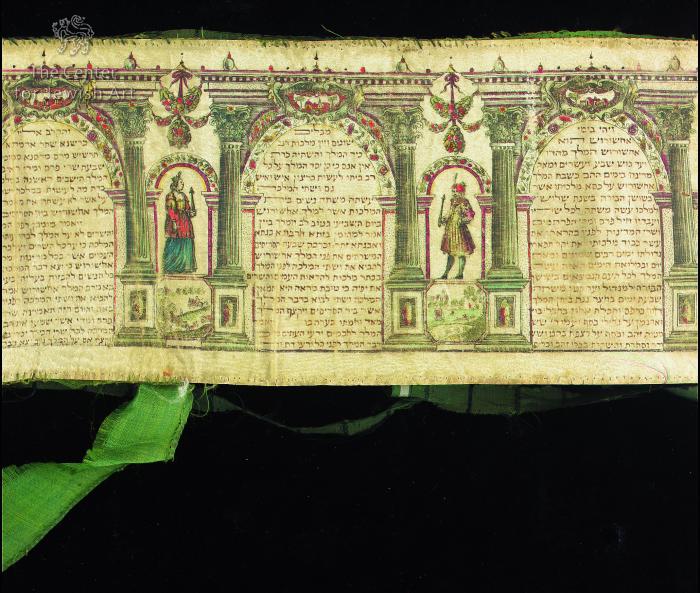 The scroll adorned with an engraved border designed by Shalom ben Mordecai Italia (also known as Shalom D’Italia) and colored by hand. The first membrane opens with a decoration unique for this exemplar - a fashionably dressed woman (a queen?) holding a long ribbon in her hands and a large diamond is incorporated into her dress; it was most likely dedicated to the benedictions or any other inscription but remained blank. The upper margins are almost undecorated. The columns of text are written within elaborately decorated arcades and are separated by the niches in which the figures from the Esther story are standing: King Ahasuerus, Queen Esther, Haman, and Mordecai. Above them and at the same time, between particular segments of the decoration, garlands are suspending. The figures stand on small octagonal pedestals filled with various land- and cityscapes. Other landscapes appear in decorative cartouches in the apexes of the arches. The pattern repeats on all the membranes in the scroll. After the last arcade appears a hand-painted cartouche with a heraldic helmet flanked by acanthus leaves above it and a ribbon below it.

The scroll is mounted on a roller with ivory handles.