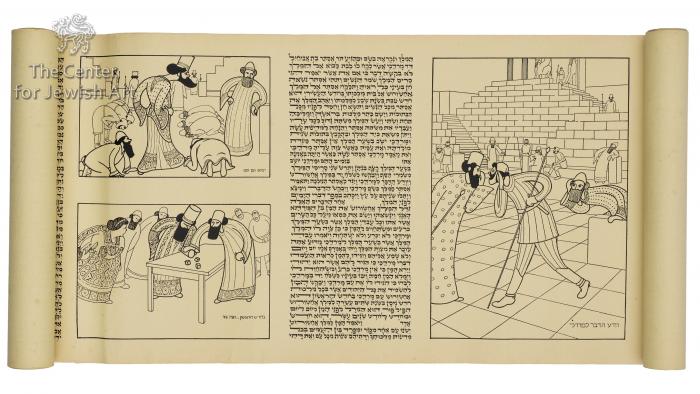 Text column no. 3 is flanked by three illustrative panels (no. 5 on the right and nos. 6 and 7 on the left).

Illustration no. 5 is labeled in Hebrew ויודע הדבר למרדכי ("And the thing was known to Mordecai", Es. 2:22). It depicts the moment when Mordecai overhears the plot of the king's chamberlains against him. Mordecai is shown on the right, listening in, while two chamberlains - one with a spear in his hand - are shown in the center and on the left. In the background, there is a staircase and a Lamassu (human-headed winged bull) statue.

Illustration no. 6 is captioned וימלא המן חמה ("Haman full of wrath", Es. 3:5). It shows the bearded Haman standing in the center of the frame, with Mordecai on the right. While other people are bowing to Haman, Mordecai is standing straight and not even looking at him.

Illustration no. 7 is inscribed בחדש הראשון... הפיל פור ("In the first month... he cast Pur [that is the lot]", Es. 3:7). The scene shows Haman in the center, watching a man cast a trio of dice on the table. Other people in the illustration, including a plump woman (possibly Haman's wife, Zeresh) watch at Haman and the lots. The plump figure of the woman exemplifies a type of sarcastic, ironic humor found in Geismar's drawings.

The scroll is formed of 3 paper sheets containing 12 columns of the text with 42 lines, except for col. 10 which has 11 lines divided into two half-columns.

The vocalized text of the Book of Esther is printed in Ashkenazi stam script with tagim, in black ink. It reproduces text written by an expert scribe (rather than moveable type) and it shows scribal practices of typical Ashkenazi megillot, such as enlarged and diminished letters in the names of Haman's sons and other enlarged letters ח (Es. 1:6) and ת (Es. 9:29).

A short biography and Geismar's immigration card are available https://www.yadvashem.org/yv/en/exhibitions/bearing-witness/esther-scroll.asp (accessed on 24.10.2020).

The images of the scroll are available on http://collections.jewishmuseum.cz/index.php/Detail/Object/Show/object_id/221868 (accessed on 24.10.2020).