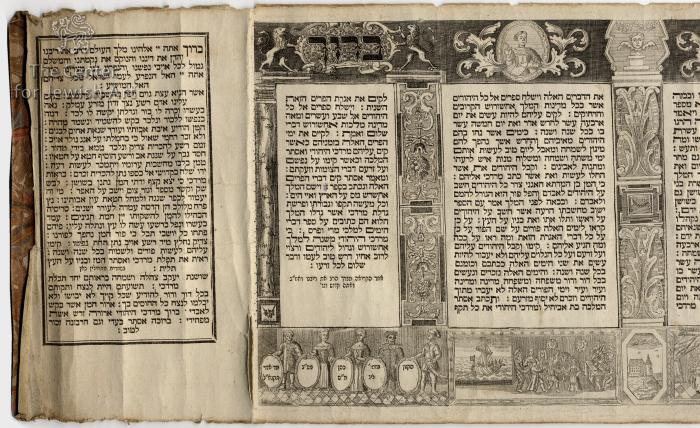 Text column no. 14 (sheet no. 4): In the upper margin, a bust of a young woman with a pen in the hand (Esther?) is depicted. In the frame placed in the lower margin, on the right, and in the center, the feast with musicians and a group of dancing people of both sexes is shown. One of them is wearing clothing typical for the Jews at the time when the pattern was designed, another man is wearing a checkered costume, and yet another man has a long curly wig. It is difficult to determine if this can be the feast after the victory of the Jews over the enemies (Es. 8:16-17) or the first Purim feast (Es. 9:17-23). On the left, a ship on the sea is shown (alludes to Es. 10:1).

In the octagon separating the frames, a landscape with a building on a hill is depicted.

Text column no. 15 (sheet no. 4): The final part of the text is printed in a panel dedicated to the benedictions. This is suggested by word ברוך framed in a decorative cartouche supported by two lions that appears just above, in the upper margins. Below the last line of the text of the Book of Esther, there is an instruction in Hebrew, in a semi-cursive script says about the text that should be recited after the reading. In the lower margin, there are five full representations of the Esther story protagonists (Haman, Mordecai, Esther, Zeresh, and Harbona) holding oval shields that in this exemplar are filled with Hebrew words forming the signature of the printer (see "Signature").

Benedictions panel (sheet no. 4): The last text panel in the scroll is not decorated. It contains the final benediction, the full text of אשר הניא "Asher Heni", and שושנת יעקוב Shoshanat Yaakov". In the text, only the word ברוך is enlarged.

The scroll is incomplete - it lacks the fragment from the beginning until half of the 7th column of the text. Its remaining part is preserved in very good condition.

The scroll is formed of 4 sheets containing 14,5 columns of text (one column is not entirely preserved) and an additional benediction panel.

Each column includes 25 lines of the text, except for col. 12 with 11 lines divided into two parts and col. 15 with 20 lines of the Megillah and 2 additional lines announcing the final benediction. The last 2 lines are printed in semicursive Hebrew font.

The text printed in the scroll reflects scribal practices of the hand-written scrolls. The letter ת (Es. 9:29) is slightly larger than an average letter in the scroll. Other enlarged and diminished letters are included in col. 12.

The sheets in the scroll are glued.

"The humble Nehemiah Leib Cohen, book-seller from Pressburg [Bratislava], on 10th of Adar [5]551 [4.02.1791] according to the minor era". In the original version of the note, the word "book-seller" and city name are written in an abbreviated form. Nehemiah Leib Cohen can be a printer of this megillah and it can be assumed that he was active in Bratislava but no further details are known about him or his letterpress.
Colophon

Below the last column of the text, on the shields held by five protagonists of the Esther story, a Hebrew inscription in a semicursive script is printed. It reads as follows:

"The humble Nehemiah Leib Cohen, book-seller from Pressburg [Bratislava], on 10th of Adar [5]551 [4.02.1791] according to the minor era". In the original version of the note, the word "book-seller" and city name are written in an abbreviated form. Nehemiah Leib Cohen can be a printer of this megillah and it can be assumed that he was active in Bratislava but no further details are known about him or his letterpress.

In the collection of the Jewish Museum in Prague, another copy of the megillah is stored (see ID 1545) but it bears no signature by Nehemiah Leib Cohen of Pressburg.

The numbers of the text columns do not take into account the missing part of the manuscript.

In the article by Šedinová (see "Bibliography"), the scroll is wrongly listed as Ms 312b.