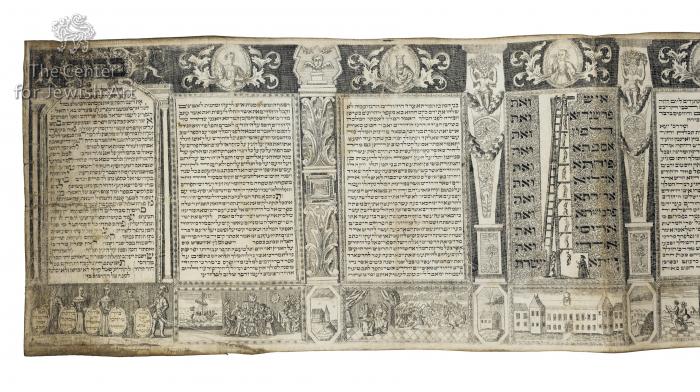 The fourth sheet contains four columns of the text (nos. 13-16) and a benediction panel:

Text column no. 13: In the upper margin, a bust of the king (Ahasuerus?) with a scepter in the hand is depicted. In the frame placed in the lower margin, on the right, a table with three scribes seated at it is shown; most likely they write the decree allowing the Jews to defend themselves (Es. 8:8-10). On the left, two messengers of the king are going to deliver the new decree (Es. 8:14).

Text column no. 14: In the upper margin, a bust of a young woman with a flower in her hand is depicted. In the frame placed in the lower margin, a long two-story building is depicted that can be a symbolic representation of the king’s palace. In the text panel above, the scene of hanging of Haman’s ten sons (Es. 9:14) is represented. On every beam of very high gallows, a single body is hanged. A high ladder leans on it and on its top an executioner is sitting. The text in the column is printed.

Text column no. 15: In the upper margin, a bust of the king with a scepter in the hand (Ahasuerus?) is depicted. On the right, two mounted troops are represented as fighting together. The clothing of the men on the left suggests that they are Jews who are fighting their enemies approaching from the opposite direction. This is one of the moments in the narrative when Jews battle their enemies but it is difficult to determine which particular episode is illustrated here (Es. 9:5-12). On the left, the royal couple sitting on the throne is represented, however, it is unclear which episode it illustrates; it can be the moment when Esther pleads with the king for an additional day of fights (Es. 9:13).

Text column no. 16: In the upper margin, a bust of the king with a scepter in the hand is depicted. In the frame placed in the lower margin, on the right, and in the center, the feast with musicians and a group of dancing people of both sexes is shown. One of them is wearing clothing typical for the Jews at the time when the pattern was designed, another man is wearing a checkered costume, and yet another man has a long curly wig. It is difficult to determine if this can be the feast after the victory of the Jews over the enemies (Es. 8:16-17) or the first Purim feast (Es. 9:17-23). On the left, a ship on the sea is shown (alludes to Es. 10:1).

In the lower margin, there are five full representations of the Esther story protagonists holding oval shields that in this exemplar are filled with Hebrew inscriptions.

The opening decoration of the scroll is partly preserved; it lacks its upper and lower registers.

Some minor damages in the edges of the first sheet can be seen.

The first membrane is darker than all remaining membranes in the scroll.

In general, the text is well preserved, although the sheets are crumpled; the text in the final panel is preserved in the worst condition.

The scroll is formed of 4 sheets containing 16 columns of text and two additional benediction panels at the beginning and the end of the scroll. Each column includes 26-27 lines of text. The text in col. 14 is printed; it contains 11 lines divided into two half-columns.

The text is inscribed in the Hebrew square script in brown ink on the flesh side of parchment membranes.

The benedictions: The initial benedictions are inscribed in the square letters in the central panel of the opening decoration. All three words ברוך are decorated with a filigree ornament.

The former number of the manuscript is Ms 312.