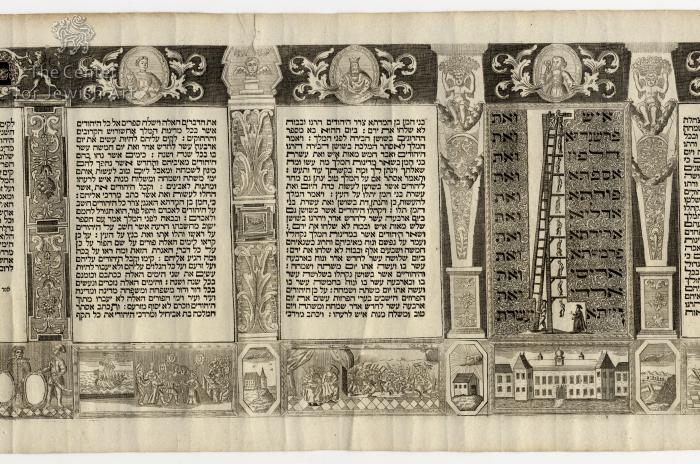 Text column no. 18 (sheet no. 5): In the upper margin, a bust of a young woman with a flower in the hand is depicted. In the frame placed in the lower margin, a long two-story building is depicted that can be a symbolic representation of the king’s palace. In the text panel above, the scene of hanging of Haman’s ten sons (Es. 9:14) is represented. On every beam of very high gallows, a single body is hanged. A high ladder leans on it and on its top an executioner is sitting. The background behind the words is filled with a filigree pattern.

Text column no. 19 (sheet no. 5): In the upper margin, a bust of the king with a scepter in the hand is depicted. On the right, two mounted troops are represented as fighting together. The clothing of the men on the left suggests that they are Jews who are fighting their enemies approaching from the opposite direction. This is one of the moments in the narrative when Jews battle their enemies but it is difficult to determine which particular episode is illustrated here (Es. 9:5-12). On the left, the royal couple sitting on the throne is represented, however, it is unclear which episode it illustrates; it can be the moment when Esther pleads with the king for an additional day of fights (Es. 9:13).

Text column no. 20 (sheet no. 4): In the upper margin, a bust of a young woman with a pen in the hand (Esther?) is depicted. In the frame placed in the lower margin, on the right, and in the center, the feast with musicians and a group of dancing people of both sexes is shown. One of them is wearing clothing typical for the Jews at the time when the pattern was designed, another man is wearing a checkered costume, and yet another man has a long curly wig. It is difficult to determine if this can be the feast after the victory of the Jews over the enemies (Es. 8:16-17) or the first Purim feast (Es. 9:17-23). On the left, a ship on the sea is shown (alludes to Es. 10:1).

In the octagons separating the frames are depicted there are (from the right to the left): 1) bridge over the river, 2) a landscape with a building on a hill, 3) a house with a sun shining over it.