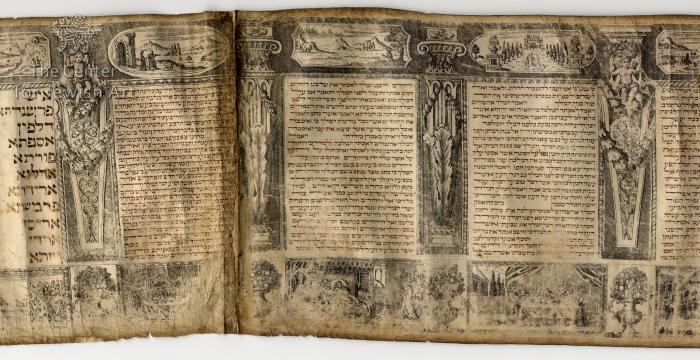 Landscape nos. 3 and 4 (sheet no. 3) and landscape no. 1 (sheet no. 4) are printed in the upper margin, and there are three frames with illustrations in the lower margin (nos. 11 and 12 on the third sheet and no. 13 on the fourth sheet).

The depictions in the frames are barely visible and are reconstructed on the basis of the other scrolls adorned with the same border.

Frame 11: The second banquet given by Esther (Es. 7:1). With the queen, the king and Haman are seated at a table. A servant approaches the table with a tray.

Frame 12: On the left, Esther reclines on a bed with a canopy as Haman falls on the bed while begging her for his life. At the same moment, the king returns from the palace gardens (Es. 7:8); he is shown on the right. In the small rectangular window, a gallows is visible; this is the same gallows that Haman built for Mordecai (Es. 5:14) and its presence here foreshadows the death of Haman (Es. 7:10).

Frame 13: On the left, a table with three seated scribes is shown; they are most likely writing the decree that allowed the Jews to defend themselves (Es. 8:8-10). On the right, two messengers of the king are going to deliver the new decree (Es. 8:14).

The family of Dutch Esther scrolls from the early 18th century designed by an anonymous engraver whose decorative scheme is characterized by four different landscapes framed in cartouches of different shapes that fill upper margins. The scrolls of this family begin with a panel composed of several figurative scenes from the Book of Esther narrative. The text columns are interspaced by the columns decorated with reliefs, elaborate acanthus leaves and garlands above which are either decorative capitals or putti holding the baskets with flowers on their heads. Lower margins are filled with the figurative scenes that chronicle the Purim story or allude to midrashim and other sources; they are interspersed by vases with plants. The same decoration repeats on all four sheets forming each manuscript. Some of their exemplars are painted by hand.