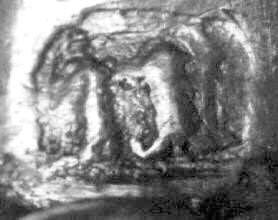 An exceptionally attractive Torah pointer, this silver Yad has a delicate hand with a red stone ring. The lower part is beautifully -twisted in contrast to the square upper section. An inscription, including the date and the donor, is engraved on the upper portion.Such large and elaborate Torah pointers are a rarity.