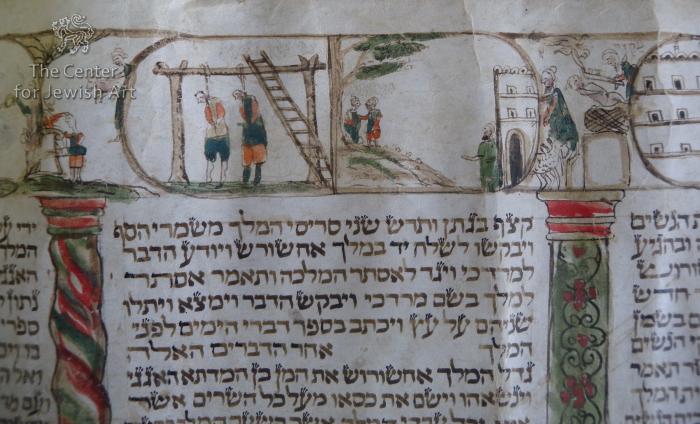 The frame above the 5th column of the text includes two scenes. On the right, Mordecai standing close to the gate of the palace overhears the plot of Bightan and Teresh against the king (Es. 2:21-22); the chamberlains are standing on a hill, under a tree. On the left, Bightan and Teresh are already hanged (Es. 2:23).

On the left side of the oval, Isaac blessing Jacob is shown, while Rebekkah holding a lamb is seen above them, on the oval's frame (Genesis 27:10-29).

Height
Length
Width
Depth
Circumference
Thickness
Diameter
Weight
Axis
Panel Measurements
Subject
E | Esther, Book of (following the order of the story) | Mordecai overhears the plot of Bigthan and Teresh (Es. 2:21-22)
E | Esther, Book of (following the order of the story) | Bigthan and Teresh hanged (Es. 2:23)
I | Isaac | Isaac blessing Jacob
|
Condition
The manuscript is preserved in good condition, although the state of preservation of the particular membranes is not the same. The second sheet is in worse condition than the first one; the text in cols. 7 and 12 inscribed on it is less legible. There are large parts of the text erased and corrected and due to this, the scroll gives the impression of being more damaged. The first sheet is torn in one place and the last one is crumpled. The shade of ink is not the same on all membranes; possibly, in some places, the second layer of ink was applied.
Extant
Documented by CJA
Surveyed by CJA
Present Usage
Present Usage Details
Condition of Building Fabric
Architectural Significance type
Historical significance: Event/Period
Historical significance: Collective Memory/Folklore
Historical significance: Person
Architectural Significance: Style
Architectural Significance: Artistic Decoration
Urban significance
Significance Rating
Languages of inscription
Unknown
Type of grave
Unknown
0
Coordinates: 0.000000, 0.000000
Ornamentation
Custom
Contents