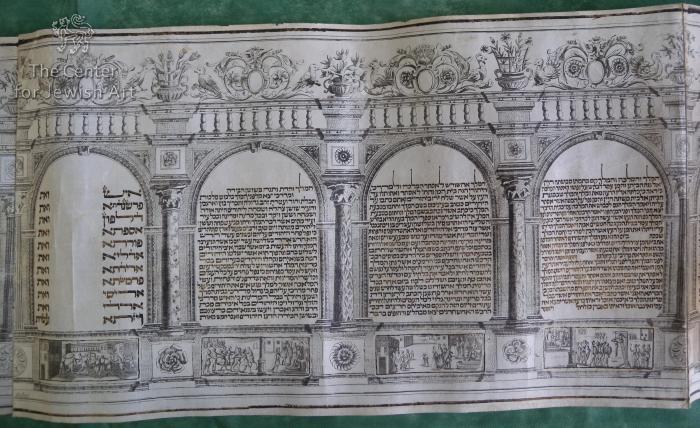 The family of Italian Esther scrolls from the 1740s produced in the mixed technique in which decorative border is printed and the Hebrew text of the Book of Esther is penned by a scribe. The lower-left corner of each sheet features a printed signature of Francesco Griselini (1717\u20121787), the Italian engraver who designed the scheme. The decoration is based on the row of arcades under which individual columns of the Hebrew text of the Book of Esther are inscribed. On the arcades is placed a balustrade with oval medallions flanked by pairs of birds with their heads turned away; these sections are interspersed by flower-filled vases. Lower margins are filled with scenes illustrating the narrative of the Book of Esther, framed in rectangles that are separated by the columns’ bases. The scrolls in this family consist either of four or five sheets with four text panels each. The decorative scheme resembles the ornamentation of Gaster II scrolls.<\/span><\/p>"}

The scroll (the text, print, and membranes) is very well preserved.

The third membrane is preserved in the worst condition.

The edges of the sheets are straight, the parchment is bright and clean. The sheets are stained - there are yellow discolorations but there is also a big stain of black ink.

A large mark obscures the top left part of text column 12, as well as a part of the printed column that separates text columns nos. 11 and 12.

Also, a piece added during the parchment restoration can be noticed - it features a different color and facture.

A part of the pattern is not printed and it was supplemented by hand.

The scroll is composed of 5 sheets containing 19 columns of the text (+ additional column with the benedictions) with 21 lines except for col. 16 which has 11 lines divided into two half-columns.

Each of the four sheets contains four text panels.

The text is inscribed in Hebrew square Italian script, in black ink, on the flesh side of the parchment membranes, which are rather thick and stiff. In addition, the side of the text and decorations is more matte and bright than the other side that is shinier and darker, and hair traces are well visible on it. However, the membranes vary.

The flags of the ל letters appearing in the first lines of the columns are elongated and fill the blank space in the arch.

In col. 16, all the names (listed on the right) are written in the column of the same width, therefore numerous letters must be elongated. The column contains also enlarged and diminished letters.

The text columns are inscribed within the arches; the space just below the arch is blank, therefore, all the lines are of equal length.

The ruling is invisible; the lines could have originally been drawn with pencil and erased.

Benedictions: all four formulas are inscribed in the last text panel in the scroll. Every one of them opens with an enlarged letter ב with a single tag.

The benediction panel contains short inscriptions in a semicursive script announcing the subsequent parts of the Megillah reading. The Tetragrammaton is replaced by two letters י with a long sloped dash and a short flag. The ligature of א and ל is used.

Printed borders on all sheets are framed by black wide lines that were drawn by hand possibly with the same ink that was used for copying the text.

Scrolls decorated with this pattern all consist of either four or five sheets.

The Griselini scrolls consist either of four or five sheets with four text panels each.

The decorative scheme resembles the ornamentation of Gaster II scrolls.

Bibliography concerning the manuscript from the MOIJA collection is unknown but other scrolls decorated with the same border are described in:

Biography of Griselini in Italian and bibliography available on http://www.treccani.it/enciclopedia/francesco-griselini_(Dizionario-Biografico)/ (accessed on 11.04.2020).