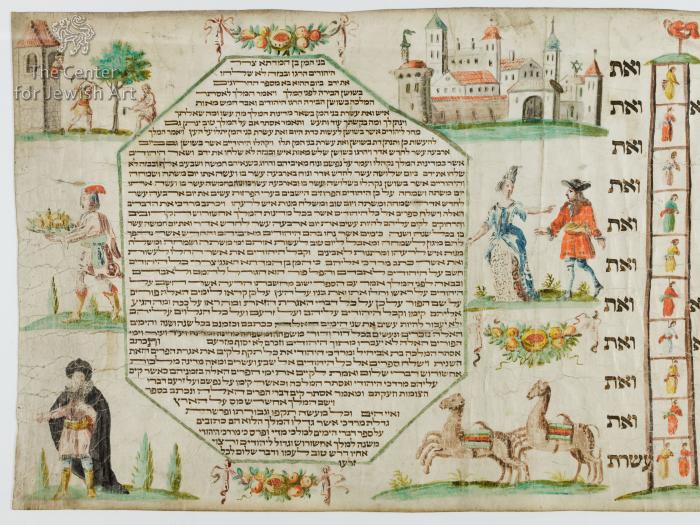 Text panel no. 8 is surrounded by 6 depictions; three of them on the right are common with the seventh text panel.

1. A city, perhaps Shushan. The Star of David atop one building, suggesting a synagogue, is likely a later addition to the manuscript.

2. A couple in fashionable costume.

4. This scene depicts a midrashic addition to the story found not in the Book of Esther, but in BT Megillah 16a. According to this tale, after Esther disclosed Haman's wicked intentions during her second banquet (Es. 7:1), the furious king left the chamber for the palace gardens, where he saw the trees of his garden being chopped down. This only intensified his anger towards the vizier. Depending on the version of the story, the trees were chopped down either by sons of Haman or by angels disguised as Haman's sons; in all artistic representations, the figures are always depicted as wingless.

5. Depiction of a man holding a tray full of fruits, alluding to the verses about sending portions to friends and poor (Es. 9:19, 9:22).

Figures in the biblical narrative are depicted as belonging to the higher social class of the artist’s day. These possibly represent court Jews, who could also be patrons and users of these manuscripts.